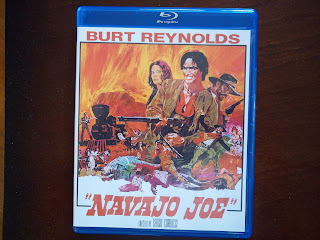 Kino Lorber has been putting out a lot of Spaghetti Westerns on Blu-ray recently, and one of the latest is 1966's NAVAJO JOE, starring of all people Burt Reynolds.

After he was shown a print of A FISTFUL OF DOLLARS by his buddy Clint Eastwood, Burt Reynolds thought that maybe he should try the Italian Western route. The actor was hired by producer Dino De Laurentiis to appear in NAVAJO JOE, and legend has it that Reynolds assumed he was going to be working with Sergio Leone. Once Burt got to Italy, however, he found out that the director of the film was to be Sergio Corbucci instead.

Corbucci had just made the very popular, and very violent European Western DJANGO. If anything NAVAJO JOE is even more violent, but Corbucci replaces the muddy Gothic atmosphere of DJANGO with the bleak, barren plains of Spain.

How violent is NAVAJO JOE? Consider what main villain Duncan (Aldo Sanbrell) and his 50-odd member gang perpetrate in just the first 25 minutes of the movie:

They first massacre an entire Indian village
Then they pillage & burn a Western town
Then they commandeer a train, and kill all the passengers on board and the soldiers guarding the money on the train.

And there's still plenty more killings to come during the rest of the story. Most of those killings are done by Burt Reynolds as Navajo Joe, as he picks off Duncan's men (Joe wants revenge for the murder and scalping of his woman during the Indian massacre). Reynolds does most of his own stunts, and he's amazingly athletic here (considering what I've heard about the disorganized way most Italian Westerns were shot, it's hard to believe that the actor did not wind up badly injured). Joe offers to help the citizens of another town from Duncan's men, but the real reason he is doing it is to get a chance to finish the gang off once and for all. As you might expect, the townspeople are snobbish, weak hypocrites--when Joe demands to be made sheriff, one of them protests that Joe isn't even an American citizen. Joe responds by saying that his forefathers were all born in America--it's Reynolds best dialogue moment in the film (one could say it is his only dialogue moment).

Of course one does not watch a Spaghetti Western for dialogue exchanges. Most people watch them because of the action--and Corbucci doles it out here in spades. NAVAJO JOE may be brutal, and it may even be called nihilistic, but it certainly isn't boring.

The most important feature of NAVAJO JOE isn't anything that is actually in the movie....it is the music score from the Maestro himself, Ennio Morricone (on the credits he is listed as "Leo Nichols"). The soundtrack is so bizarre and otherworldly that it defies description. It's as if a group of Native Americans are trapped in Hell and are wailing to get out. The score is so overpowering that at times it seems what is going on pictorially is nothing more than a video for Morricone's music. NAVAJO JOE remains one of the Maestro's greatest scores, and it received a whole new audience in the 21st Century due to Quentin Tarantino using parts of it for his KILL BILL films. I happen to have the NAVAJO JOE soundtrack on CD and vinyl--I got the record for only $1 at a vendor's booth during the last Monster Bash Conference. 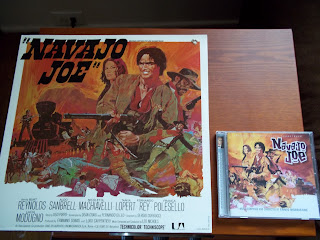 The NAVAJO JOE soundtrack on vinyl and CD

Kino's Blu-ray of NAVAJO JOE has a rather soft picture and a thin sound, but that is probably due to the source material (I'm sure that very few 50 year old Spaghetti Westerns look and sound perfect). The only extra, other than some trailers, is a low-key audio commentary by Kino executive Gary Palmucci. He mentions some details about the movie and Ennio Morricone, but a true Spaghetti Western expert would have been more welcome as a commentator.

From the standpoint of pure brutal violence, NAVAJO JOE has to be looked upon as one of the most memorable Italian Westerns. The idea of a young Burt Reynolds appearing in this type of movie may come off as a joke at first, but he's very good as a physical manifestation of vengeance. You may disagree with Sergio Corbucci's taste in material, but you have to admit the man was a more than capable director. It is worth watching this just to listen to Morricone's score. Those who prefer the traditional old-fashioned Western are advised to take a pass on this one.
Posted by Dan Day, Jr. at 3:05 PM