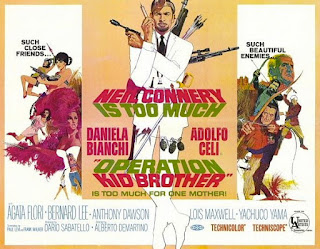 I recently made another YouTube movie "discovery"--this time it is a 1967 James Bond spoof called O.K. CONNERY. It was released in the U.S. under the title OPERATION KID BROTHER. Both titles refer to the fact that the star of the film is none other than Sean Connery's younger brother, Neil Connery.

1967 was the height of the spy craze in the entertainment industry, with all sorts of James Bond rip-offs and knock-offs appearing all over movies and television. For his Bond knock-off, Italian producer Dario Sabatello came up with the audacious idea of casting the "real" James Bond's sibling, even though he wasn't a professional actor. The very concept seems ridiculous, and I expected this movie to be terrible--but in all honesty, it's not that bad!

What helps the movie out is the involvement of several actors who had already played roles in the official Bond films. There's Bernard Lee, "M" himself, in the role of spy chief Colonel Cunningham (does that make him "C" in this picture?). Lois Maxwell, who at the time played "M"'s secretary Miss Moneypenny, here plays....the Colonel's secretary, "Miss Maxwell". Both Lee and Maxwell have much more to do here than in almost all of their Bond credits combined. Moneypenny fans may be interested to know that Maxwell even gets to participate in a gunfight!

The movie's main villains are played by Adolfo Celi and Anthony Dawson. Celi had played Largo in THUNDERBALL, and Dawson had been in DR. NO, along with being the "figure" of Blofeld in a couple Bond movies. Their characters in this story work for an evil organization called "Thanatos", which of course is a take-off of SPECTRE from the Bond films. The master plan of Thanatos is to destroy the world's technology with the use of ultra-magnetic power.

As for Neil Connery's part, he plays a world-renowned Scottish plastic surgeon named--Neil Connery. (Seriously, that is what he is called in the film....hey, if you're gonna make use of the Connery name, you might as well use it to the full.) One of Connery's patients is caught up in the Thanatos plot, so the Colonel and Miss Maxwell ask for his help in the affair. They tell Connery that he can be trusted because his brother is their "top secret agent" (which is exactly true, when you think about it). Neil Connery wears a goatee in this movie, but other than that (and the fact that he is not as well-built as Sean), he does look a bit like his brother.  On this version of this film that I watched on YouTube, Neil Connery was a dubbed by an American actor, so it is hard to give a definitive judgement on his performance. All things considered, he's really not all that bad...most Italian sci-fi and action movies of this period had wooden leading men, and Neil Connery doesn't do any worse than most of them. Neil just didn't have the dangerous screen presence his brother had.

Neil Connery's character in this film may not be a true spy, but he does have some talents of his own. Not only is he a cutting-edge plastic surgeon, he is also an expert hypnotist, master lip-reader, and a champion archer. All these abilities come into play during the story.

Every James Bond imitation needs a pseudo-Bond girl, and O.K. CONNERY has the distinct advantage of having an official Bond girl, Daniela Bianchi, who starred in FROM RUSSIA WITH LOVE. Bianchi looks simply stunning here, and in literally every scene she is in, she gets to wear a different fantastic costume. At the climax she sports skin-tight orange leather pants (that fact alone is enough to qualify O.K. CONNERY for a Blu-ray release). In every Bond film there is a "good" Bond girl and a "bad" Bond girl. Here Bianchi gets to be both--for most of the running time she is working for Thanatos, but toward the end she sides with Neil Connery. Bianchi's character even has a gang of her own--a bevy of scantily-clad beauties who take part in her schemes (such as wearing showgirl costumes while stealing a nuclear device). While watching this scene I couldn't help but think of Maud Adams and her circus girls in OCTOPUSSY--did O.K. CONNERY happen to inspire someone in the official James Bond production team? More than likely not--but O.K CONNERY isn't that far removed from some of the weaker Roger Moore Bond outings.

You can't really compare O.K. CONNERY alongside the official Bond films. It should be compared to the hundreds of other imitation Bonds made during the same era. Most of those imitations try too hard to be funny, or outlandish. There's intentional humor in O.K. CONNERY, and outlandish moments, but all in all it is a solid, well-made film. It certainly isn't cheap--it was filmed at several photogenic European locations, and Daniela Bianchi's wardrobe alone must have been a major expense. Director Alberto De Martino does a fine job handling all the offbeat ingredients, and the editing and cinematography are more than adequate. The music score is by Ennio Morricone and Bruno Nicolai, and it is more retro-lounge than fake John Barry (there is a musical passage that features a take-off on the famous James Bond theme guitar riff). I went on Amazon to see if the O.K. CONNERY score was available on CD, and it is....but be prepared to pay a pretty penny for it (I passed).

I had low expectations for O.K. CONNERY when I started to watch it, but I wound up being pleasantly surprised. No, it's not GOLDFINGER, but it is entertaining in its own right. If you are a huge James Bond fan you should check it out just to see Bernard Lee and Lois Maxwell play "special enlarged" versions of their usual roles. I would love to see O.K. CONNERY get an official American Blu-ray release....and I know I would much rather watch this movie again instead of, say, A VIEW TO A KILL or QUANTUM OF SOLACE.