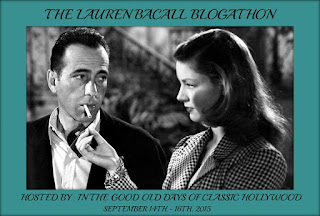 This is my contribution to The Lauren Bacall Blogathon, hosted by the site In The Good Old Days Of Classic Hollwood (crystalkalyana.wordpress.com)


For this blogathon I decided to do something a little different. Instead of covering a certain Lauren Bacall movie performance, I am writing about a single photo. I'm sure if you know anything about Lauren Bacall, or have happened to read anything about her, you are familiar with this picture. It is one of the most famous publicity photos of all time. It was taken on February 10, 1945, at the National Press Club in Washington D.C.

At the time Bacall was engaged in a publicity campaign for her debut film, TO HAVE AND HAVE NOT. That movie would change her life professionally and personally. The very young model-turned-actress had not yet reached major superstar status, but she was definitely on her way--and this photo helped.

On that day in 1945 Bacall and her press agent, Warner Bros. publicity chief Charlie Enfield, were visiting the National Press Club. Vice-President Harry Truman just happened to be playing the piano in the bar area at the time (Truman had only been sworn in a couple weeks ago, and he was already bored of the office). Enfield suggested to Bacall that she should climb on top of the piano....and the rest is history.

As a publicity stunt it worked like a charm...this photo, and others taken at the same time, ran in all the major newspapers. For some Americans this photo would be the first time that they had heard of, or even seen, the name "Lauren Bacall" (the young lady, born with the name Betty Perske, had only changed it a short time ago). The photo session caused some controversy--at the time a Vice-President was not expected to be publicly seen in such a situation. There's no doubt, however, that the photo gained Harry Truman several fans.

What is so striking about the photo today is the juxtaposition between the homespun, plainspoken, ordinary-looking middle-aged Truman and the young, sleek, and alluring Bacall. Truman was obviously enjoying himself (can you blame him?), and that just makes the shot work even more.

Today one sees so many photo-ops involving stars and politicians, they barely register anymore. If an image was released of a skirt-wearing Jennifer Lawrence perched on top of Joe Biden's desk, while the Vice-President was typing away on a laptop, it might trend for a couple days or so...but it wouldn't have near the impact that the Bacall-Truman encounter had. If you read any books, or anything on the internet, written about the life of Lauren Bacall or Harry Truman, you are going to see a version of this photo.

Most of the great historical photographs are purely a matter of chance. It all comes down to a combination of the right moment, the right subjects, and the right atmosphere. The Bacall-Truman photo has that combination--and a lot of that is due to the presence of Lauren Bacall. When viewing the photo it feels as if she belongs on top of that piano. If any woman could have looked totally natural in such a pose, and in such a setting, it was Lauren Bacall.

By the way, there is still a piano in the bar area (now called "The Truman Lounge") of the National Press Club. Legend says it is the same piano...but since so many women have tried to imitate Lauren Bacall by sitting on it over the years, the piano has had to have been rebuilt.
Posted by Dan Day, Jr. at 1:22 PM