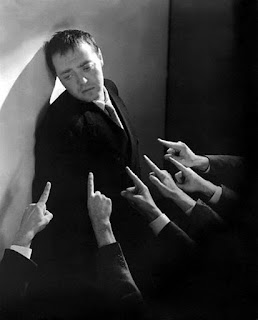 One of the latest additions to my movie collection is a DVD of 1935's CRIME AND PUNISHMENT, starring Peter Lorre and directed by Josef von Sternberg. I had never seen this film--in fact, I don't ever remember it being shown on TV within my knowledge--but I just couldn't pass up a movie that teams Peter Lorre and von Sternberg.

CRIME AND PUNISHMENT is based on the famous novel by acclaimed Russian writer Feodor Dostoyevsky. The movie was produced by Columbia Pictures, Studio head Harry Cohn had scored a great coup by bringing over Peter Lorre from Europe to the United States, and it was Lorre who wanted to appear in Dostoyevsky's story. (One can only imagine Cohn's response to the project.) The result is one of the most "art for art's sake" movies ever made at any major studio during the Golden Age of Hollywood.

The brilliant young student Raskolnikov (Lorre) graduates from his university with high honors. He soon has a paper on criminology published, but he is not even granted a byline. The young writer is arrogant and proud, and he believes that extraordinary men (such as himself) have the right to commit crimes that an ordinary man would not. Raskolnikov is also very poor, and his frustrations over his financial plight lead him to murder a greedy old pawnbroker. The writer is convinced that his superior mind will enable him to get away with the crime, but he underestimates the abilities of Inspector Porfiry (Edward Arnold). The two men engage in a cat-and-mouse game for the rest of the story.

CRIME AND PUNISHMENT is without doubt one of Peter Lorre's best showcases. The role of Raskolnikov allows Lorre the opportunity to give an acting tour de force. At one moment Lorre is fearful and anxious, the next haughty and confident. Raskolnikov goes through so many mood swings you can't help but wonder if he is a manic-depressive. CRIME AND PUNISHMENT is one of the rare times in 1930s Hollywood where an off-beat character actor gets the lead role, and Lorre makes the most of it.

Even though Lorre does have the lead role, it is Edward Arnold who is listed first in the credits (Lorre gets special billing as "The Great European Star"). Arnold holds his own as the more humanistic Inspector, whose surface affability covers a determined sense of justice. Watching Arnold constantly chuckling over Lorre's antics reminded me of Peter Falk's Columbo--Raskolnikov may be the "genius", but the Inspector has him sized up the moment he first sees him. Porfiry notices that Raskolnikov has pictures of Napoleon and Beethoven in his cheap apartment, and the Inspector makes mention of how much the writer even looks like the French emperor.

The other major role in CRIME AND PUNISHMENT is that of Sonya, a poor young woman who attracts Raskolnikov's attention. Sonya is played by Marian Marsh, the Princess of Pre-Code herself. Because this is not a Pre-Code film, it is not blatantly stated that Sonya has been reduced to being a streetwalker, but it is made rather obvious to the viewer. Marsh as usual is all sweetness and innocence, and she is drawn to Raskolnikov due to his act of generosity toward her. That being said, Peter Lorre and Marian Marsh have to be one of the strangest romantic couples in movie history.

What I really took away from CRIME AND PUNISHMENT was how much it reminded me of a true film noir. It isn't set in 1940s America--the film tries to be vague about where and when it actually is set--but almost all of the classic film noir elements are here. An anti-hero down on his luck, haunted by guilt; an urban setting, drenched in claustrophobic shadows; and the presence of fate hanging over the story. Marian Marsh as Sonya may be more fallen angel instead of hard-boiled dame, but she fits the noir atmosphere as well (just look at the publicity photo of her at the end of this post). I've never heard of this version of CRIME AND PUNISHMENT being called an early noir, but I believe it should be.

This new DVD of CRIME AND PUNISHMENT has been released by Mill Creek Entertainment. Mill Creek is known for putting out inexpensive product (some would say cheap--I got this for $7 from Amazon). The transfer used on this DVD looks great, but there are no extras whatsoever. 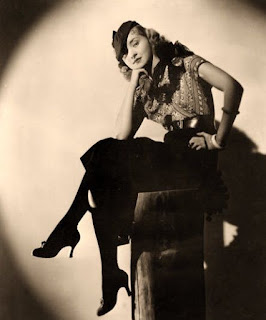 Marian Marsh in CRIME AND PUNISHMENT