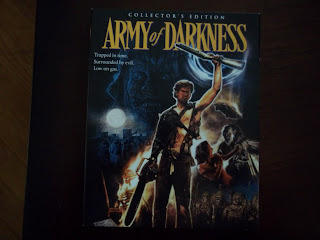 ARMY OF DARKNESS is one of my top 50 favorite movies of all time. Director Sam Raimi's third chapter in his EVIL DEAD film series is a wild, goofy, roller-coaster ride. If I remember correctly, Raimi once said in a Cinefantastique article on ARMY OF DARKNESS that the movie was made for the 12-year old boy in all of us. As someone who is constantly accused of still acting like he's 12 years old, ARMY OF DARKNESS is to me far more entertaining than all of Raimi's SPIDER MAN movies put together.

This picture has been released on home video several times, by both Anchor Bay and Universal. In fact, Anchor Bay put out so many versions of the EVIL DEAD titles that it became something of a running joke. Shout Factory, through their Scream Factory label, has now come out with the ultimate edition of ARMY OF DARKNESS.

This release includes four different versions of the film. Disc one features the 81-minute theatrical version, disc two has the 96-minute unrated director's cut, and disc three has an 88-minute international cut, and a 90-minute TV version of the film. (This TV version is in standard def, and it is in fullscreen. The picture quality is sub par, and it should be only watched for comparison purposes.)

The release has a boatload of extras as well. The most important one is a 90-minute documentary on the making of the film, featuring interviews with 20 members of the cast & crew. The main talking head is Bruce Campbell himself. Unfortunately neither Sam Raimi or producer Robert Tapert make an appearance. Raimi & Tapert were not involved in the extras for Shout Factory's DARKMAN Blu-ray either, which leads one to believe that the duo harbor some hard feelings toward Universal Studios--if you watch this Blu-ray's documentary, you'll know why.

The documentary gives a thorough account of the trials and tribulations that went on behind the scenes of ARMY OF DARKNESS. Campbell, as always, steals the show with his hilariously honest and unique take on the business of low-budget genre film making. If you already own ARMY OF DARKNESS (this is the third time I have bought it on DVD or Blu-ray) and you are unsure whether to buy it again, I suggest you do so just for the documentary.

The other extras are spread out on each of the three discs. They include trailers, TV spots, vintage featurettes, deleted scenes, behind-the-scenes footage, still galleries, and a audio commentary (from an earlier home video release) with Sam Raimi, Ivan Raimi, and Bruce Campbell. The Blu-ray case cover is reversible, and it includes the original Universal main poster image.

Do we really need four versions of ARMY OF DARKNESS? Well, why not? I have to say that for some reason the international cut of the film looks the best of the four. The director's cut presented here is of a far better quality than the one on the old Anchor Bay DVD. (By the way, I much prefer the original "S-Mart" ending to ARMY OF DARKNESS than the ending on the director's cut.)

Watching so many versions of ARMY OF DARKNESS gave me a greater appreciation for Bruce Campbell's performance as Ash. Campbell now has an exalted position in the world of geek culture....but I believe that the actor is still somewhat taken for granted. Many people just don't realize what Campbell went through in this movie. Not only is he literally in almost every shot, he also had to play "Evil Ash" as well (and suffer through a complex makeup on his entire face). Campbell also had to ride horses, engage in sword fights, and perform a number of slapstick stunts and falls. And if that wasn't enough, he had to play a character that was a goofy jerk...and still make him likable to the audience. I have to say that Bruce Campbell, in ARMY OF DARKNESS, gave one of the greatest performances in genre movie history. He'll never get the same credit as, say, Meryl Streep or Robert DeNiro would in a "serious" role....but he should.

The other thing I noticed during my ARMY OF DARKNESS binge was that this was one of the last great practical-effects laden movies ever made. Many of the extras go into great detail on how these effects were achieved, and they all have a texture to them that CGI can't match. If ARMY OF DARKNESS had been mostly computer-generated, I don't think it would have had half of the impact that it currently has now.

Obviously this release was timed to coincide with the new ASH VS. EVIL DEAD TV show (Bruce Campbell mentions the show during the main documentary). It's a bit ironic, then, to note that due to rights issues the TV show has to pretend ARMY OF DARKNESS doesn't exist!

You either love ARMY OF DARKNESS or you think it's just stupid. You know how I stand. I got this Blu-ray from Amazon for less than $20, and that's a magnificent deal for a package that has four versions of the movie and is stuffed with extras. Shout Factory deserves major kudos for this release.