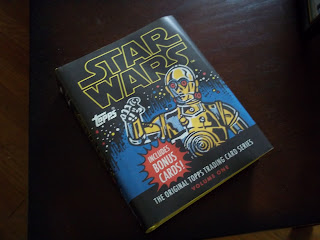 If you were a kid back in 1977, chances are you were obsessed with a new film called STAR WARS. And if you were obsessed with STAR WARS, you tried to get as much merchandise from the film as possible. There actually wasn't a whole lot of Star Wars stuff available in 1977 for kids--the Kenner action figures wouldn't come out until 1978. Burger Chef came out with some posters, and of course Marvel released their extraordinary comic book adaptation of the film, but younger STAR WARS fans had to rely mostly on their own imaginations for a time.

That is why the original Topps STAR WARS trading card set has such an important place in the history of the Star Wars Universe. In a pre-internet, pre-cable era, any real information, or images, about the movie was hard to get to. The Topps set provided that information in spades--most of the basic facts about STAR WARS I learned from the set. For those who had not yet seen the film, the card photos offered a tantalizing glimpse at what one could expect, and for those who had seen it, the photos encouraged you to go see it again.

The first Topps STAR WARS card set was so popular the company wound up releasing a total of five series of 66 cards each, for a mind-boggling grand total of 330 cards. For a non-sports card set, this was a humongous number (some of Topps' sports sets of the same period didn't even approach that total). The original Topps STAR WARS set is now considered to be by many the greatest non-sports card set ever produced.

I had most of the cards when I was a kid, and through time and various other things, they are now all gone. Every so often I go on ebay to see how much a complete set runs for--trust me, they ain't cheap. Thankfully Abrams Comicarts has published a fantastic volume called STAR WARS: THE ORIGINAL TOPPS TRADING CARD SERIES. The book reproduces the front and backs of each card in the set. The result is a potent mix of fun and nostalgia, and a must-have for anyone who was a young Star Wars fan in that heady summer of 1977.

All 330 cards are shown, in color, and each card gets its own page. The five series are presented in the order in which they were released--blue, red, yellow, green, and orange. (I remembered the order on my own, by the way.) All the stickers released with the sets are showcased as well, including the backs of the stickers, which formed a giant picture from the film. The boxes and pack wrappers
from the sets are also shown.

Gary Gerani, who worked on the sets for Topps, writes a commentary on the various cards throughout the book. (Gerani is also the author of the excellent TOP 100 series of movie books from Fantastic Press and IDW.) The personal background on the making of the set that Gerani gives is fascinating--at first Topps didn't even want to do a series of STAR WARS cards. Because the movie's popularity was so immense during the 1977-78 period, Topps had to scramble to get new and different photos for the newer series. When one looks at all the cards in this book, one realizes that many of them are basically just alternate angles of the same scenes, and a few photos were repeated. As a kid back then, we didn't notice--or care. Anything with Star Wars on it was welcomed with open arms. I can assure you these cards were hugely popular among schoolkids--if you had a card with Darth Vader on it, that was the equivalent of hard currency on the playground. (Ironically, there really weren't all that many Vader cards in the original sets--or at least not as many as one might think.)

The last series, the orange series, is looked at by some Star Wars fans as the most interesting series of all. Gerani writes that for the orange series Lucasfilm provided Topps with many photos never seen before, including several shots of the Mos Eisley cantina sequence. The orange series also features a number of behind-the-scenes pictures, including a few cards showing George Lucas himself (and yes, he's wearing a plaid shirt!).

I can't tell you how important these cards were to me as a young Star Wars fan. The backs of the cards didn't just give you the story synopsis--they also gave you information on the cast, and background on the making of the movie itself. If you read all the card backs from the sets even today, you are still going to get a fairly thorough examination of all aspects of the movie. That's a testament to the people who worked at the Topps company--this wasn't just another card set for just another movie, it was something above the ordinary--just like STAR WARS itself. 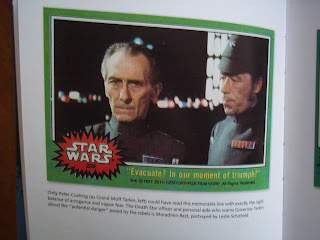 The book's afterword is written by memorabilia expert Robert V. Conte, and it discusses the ultra-rare 16 card Star Wars set released by the parent company of Wonder Bread.

This is an amazing idea for a book--it's as if it was specifically designed for me personally. Being an original 1977 Star Wars fan (and a card collector), I can't help but love it. For me it is almost a mini-time machine. As a film geek I am constantly being accused of wallowing in mindless nostalgia, and I know my praise of this book will only strengthen that perception. But I look at it this way--there are plenty of people out there who get enjoyment out of partaking in certain unsavory activities, and they don't believe they should be criticized for it--so I see no reason why I should get flack for continuing to appreciate a movie I saw almost 40 years ago as a kid. The original Topps STAR WARS trading card set was a major part of my childhood, and I'd like to thank Abrams, Topps, and Gary Gerani for giving it a proper showcase.
Posted by Dan Day, Jr. at 10:30 AM