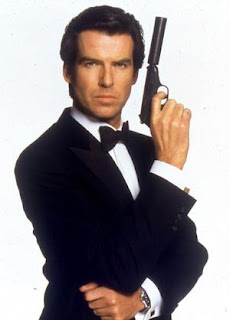 Pierce Brosnan made a huge impact on the James Bond movie franchise even before he was cast as Bond. As I discussed in my blog posts concerning Timothy Dalton's time as 007 (from October 2012), Brosnan had originally been cast to take over as Bond from Roger Moore, but his contract to the REMINGTON STEELE TV show got in the way. Many (especially the media) felt that Timothy Dalton was nothing more than a pretender who usurped the role that was supposed to be Brosnan's. Both of Dalton's film outings as Bond were not all that popular with the general public, and the shadow of Pierce Brosnan hanging over the franchise didn't help matters.

After LICENCE TO KILL in 1989, the Bond series took a forced break due to legal matters concerning which studio actually had the rights to the character (matters which were far too complicated for me to cover in this blog). When the Bond movies were ready to start back up again, it was generally assumed by nearly everyone that Pierce Brosnan would take over the role, and he did starting with GOLDENEYE, which was released in 1995.

This may be a surprise to some readers, but I think Brosnan was an excellent Bond. I always saw him as a combination of Sean Connery and Roger Moore. Like Connery, Brosnan could get rough and tough when he needed to (Brosnan's Bond definitely has a mean streak to him), and like Moore, Brosnan had a smooth way with the quips and the ladies (Brosnan's Bond has a huge female fan base). Brosnan kept himself in top physical shape for the part, and he tried to do the majority of the stunts. Despite his reputation as a pretty boy, Brosnan was able to put across the idea that he was someone you wouldn't want to get into a fight with.

There's one Brosnan as Bond moment that particularly sticks out to me. It is in TOMORROW NEVER DIES, right after Bond has ruined Elliot Carver's press gala. Bond is sitting in his hotel room, waiting for Carver's goons to bust in. Bond has his suit jacket off, his gun at his side, and he's drinking vodka. He's tired, apprehensive, and angry. It's just a short moment, but it is about as close to the Ian Fleming Bond as you can get.

Unfortunately there's very little in the rest of the Brosnan as Bond movies that matches that moment. Brosnan's legacy as 007 is hurt by the fact that he never really appeared in a great James Bond film. All four of the movies he starred in are somewhat schizophrenic--they try to be serious and goofy at the same time, with the result being that none of them come off in a consistent manner.

After a five year break GOLDENEYE would have been the ultimate opportunity to go in a totally new direction with James Bond, but the Broccoli family were not interested in reinventing the wheel at that point--they were more worried about making sure the wheel still worked. GOLDENEYE was all about making a typical Bond movie that would appeal to the largest audience. For the most part, it worked. In the first thirty minutes of the film, Brosnan gets more female action--and more laughs--than Timothy Dalton did in two whole movies.

GOLDENEYE is the best of the Brosnan Bonds, which doesn't say much about the movies that followed. GOLDENEYE tries to appeal to all Bond fans by using all the classic James Bond movie tropes. Sean Bean is very good as the villain--the idea of a Double-O agent turning rogue and becoming a major bad guy is a interesting idea, but it is not developed as well as it could have been. (As we shall see, none of the Brosnan Bonds feature a truly memorable main baddie.)

TOMORROW NEVER DIES is okay, but it is basically a remake of THE SPY WHO LOVED ME. Both films start out with an attack on the British Navy, both films have a ultra-rich megalomaniac who wants to start World War III, and both films have Bond teaming up with an agent from a Communist country. Having Jonathan Pryce as a Bond villain seems a great idea on paper, but once again the execution is lacking--Pryce comes off as more silly than dangerous. Michelle Yeoh is quite impressive as Bond's Chinese partner.

GOLDENEYE and TOMORROW NEVER DIES were directed by action specialists (Martin Campbell and Roger Spotiswoode). The next Brosnan Bond, THE WORLD IS NOT ENOUGH, was helmed by a "serious" director, Michael Apted. You couldn't tell that by the result, however. THE WORLD IS NOT ENOUGH veers wildly from one attitude to another, and it suffers mightily from a bad guy (played by Robert Carlyle) who is built up as a major threat but winds up being a dud. The movie's serious tone is represented by Bond's relationship with the troubled Elektra King (Sophie Marceau). The elegantly sexy Marceau is the best Bond girl (and best Bond villain, for that matter) in the entire Brosnan era. This movie is all but ruined by the presence of Denise Richards as a nuclear scientist, and the gimmick casting of John Cleese as the new Q.

DIE ANOTHER DAY was released in 2002, to coincide with the 50th anniversary of the James Bond movie series. There was a lot of expectations for this entry in the series, and the result is one of the most disappointing Bond films of all. In this movie a supposedly hot, up-and-coming director was used (Lee Tamahori). About the only thing Tamahori did of note was make a movie which looks like all the other wild action flicks made during the same period. When people talk about DIE ANOTHER DAY, everyone mentions the invisible car, but for me the worst sin by far is having a CGI James Bond perform a CGI stunt. A huge deal was made about Halle Berry being in the film, but her character is basically the same role Michelle Yeoh played in TOMORROW NEVER DIES--and in my opinion Yeoh did a way better job. (Pierce Brosnan even had to share the film's main poster with Berry--just like Roger Moore had to share the A VIEW TO A KILL poster with Grace Jones.) DIE ANOTHER DAY also has an underwhelming villain, and a goofy title song (and a goofy cameo) by Madonna.

If anything good came out of DIE ANOTHER DAY, it was the fact that it was patently obvious James Bond really needed to be rebooted for the 21st Century. Could Pierce Brosnan have played Bond in a Daniel Craig-type outing? Yes, I believe he could have. Brosnan always hinted during his time as Bond that he wanted to do something more with the character. All the Brosnan Bond movies made huge amounts of money, and the Broccoli family at that time was not willing to mess with the formula. The Brosnan era had several highlights, such as Judi Dench as M, the music of David Arnold, and many action set-pieces, such as the pre-title sequence in THE WORLD IS NOT ENOUGH. One could make a truly great Pierce Brosnan James Bond film by editing all four of his outings into one feature (and editing in a great James Bond villain from the past).

I think that Pierce Brosnan made a fine Bond. He never got the chance to be in a fine James Bond film, and that hurts his 007 resume (even George Lazenby can say he was in ON HER MAJESTY'S SECRET SERVICE). If he had to portray Bond in a movie right now, he'd still be able to pull it off.