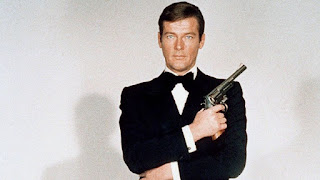 There is a theory among Doctor Who fans. The theory is that whenever someone starts watching, or discovers Doctor Who, whoever happens to be playing the character at that particular time becomes that person's favorite Doctor. I don't know if that theory works for the James Bond universe, but I do know that when I first became aware of 007 as a kid in the 1970s, Roger Moore was James Bond--and for a long time it was Moore that always came to my mind whenever the character was mentioned.

When I became a teenager I read all the Ian Fleming novels and watched all the other James Bond movies on TV. My perception of Moore as THE James Bond changed. I became a huge fan of Sean Connery's Bond, and I couldn't wait for Moore to quit playing the role. A lot of kids who grew up in the 70s and 80s are now re-assessing Moore as Bond--such as myself. Maybe it's just nostalgia, but my respect for Moore as 007 has gone up a bit recently.

This year marks the 30th anniversary of Moore's last outing as Bond, the horrid A VIEW TO A KILL. For many years after that Moore was the one given the most blame for how the Bond series fared in the 1970s. The problem with that assessment is that it does not take into account 1971's DIAMONDS ARE FOREVER, made before Moore took on the part. DIAMONDS ARE FOREVER is basically a Roger Moore-type Bond movie without Roger Moore, and it proves that the series was heading in a very different direction from what it had been in the early 1960s--even if someone other than Moore had wound up cast as Bond.

Certainly Moore had a huge effect on how the Bond series turned out during his tenure. Before becoming 007, Moore was most famous as a leading man for TV. He was handsome, with an appealing personality, and he had a way with one-liners--but he wasn't anything like Fleming's brooding misanthropic secret agent. Moore was well aware of his limitations as an actor, and instead of trying to be like Bond, Moore just played his usual "Roger Moore" persona.

One advantage Moore had was his screen presence. I've always believed that the character of James Bond doesn't need a great actor as much as it needs someone with enough presence to make the audience think he is Bond. Moore had that in spades. There were all sorts of wild and silly things going on in the world of Roger Moore's Bond, but the man made you buy into whatever was going on--and that's not an easy feat for any performer to pull off.

Moore had another advantage over all the other actors that have played the role--he actually enjoyed doing it. Roger Moore didn't just love being Bond, he reveled in being 007. Whenever one of the Moore Bond movies were getting ready to come out, the newspapers would always print a publicity photo of Moore on the set, with a big grin on his face, surrounded by a dozen or so gorgeous women. Moore constantly had a look on his face that said, "Yep...I'M James Bond, and I'm having a hell of a time." Moore's enjoyment was felt by moviegoers, who wanted to be with him on his experiences.

Today all the other James Bond actors either refuse to even talk about the role, or reflect on it with a sense of disdain. Moore will talk about Bond anytime, anywhere--I bet if you saw him walking down the street and you asked him a Bond question, he'd chat with you for 30 minutes. Moore has never felt that Bond was "beneath" him, and average guys like me respect that.

Now...was Roger Moore the best person to be Ian Fleming's 007? Well, probably not. But once again, it has to be said that the James Bond movies are not made for hard-core Fleming fans. Most people who watch the Bond films have never read a Fleming novel in their lives. I'm not saying this to make excuses for some of the series' more lackluster outings--I'm just stating a simple truth. The Moore Bond films went overboard on the "goofy fun" element, but they were goofy fun, and Moore was a very popular James Bond.

Moore's first two movies as 007, LIVE AND LET DIE and THE MAN WITH THE GOLDEN GUN, are somewhat weak--if it wasn't for Christopher Lee, THE MAN WITH THE GOLDEN GUN would probably put you to sleep. Series Co-Producers Cubby Broccoli and Harry Saltzman then split up, with Broccoli taking control of the franchise. Broccoli wanted to bring the series back to its larger-than-life status, and the result was THE SPY WHO LOVED ME, without doubt the best Roger Moore Bond film. The success of STAR WARS influenced Broccoli to go even bigger with MOONRAKER, the movie now generally considered the worst Bond film of all time. I re-watched MOONRAKER not that long ago, and yes, it is incredibly silly, but I came away impressed with how much money was lavished on it--it truly is a spectacular production, and people forget that it made a killing at the box office.

FOR YOUR EYES ONLY was an attempt to go "back to the basics"--but it was a half-hearted attempt that still tried to incorporate typical 70s Bond silliness, such as a fake Blofeld and a fake Margaret Thatcher. OCTOPUSSY had some interesting elements, but by the climax it was goofy season once again, with a group of circus showgirls fighting off a bunch of heavily armed bad guys.

Once the 1980s came along it was readily apparent that Moore wasn't getting any younger. Moore had always tried to avoid too much heavy lifting as 007, and now it seemed Moore's stuntmen got as much screen time as he did. A VIEW TO A KILL was so bad it put Moore out to pasture permanently. What can you say about a movie that gives us the unforgettable sight of a blimp sneaking up behind Tanya Roberts?

It would be easy to totally blame Roger Moore on the decline of the Bond series during the 1970s and the 1980s, but that's too simple. EON Productions followed a rigid formula when making the Bond films, using certain directors, screenwriters, and off-camera personnel over and over again. Moore wasn't the type of actor to rock the boat, and even if he did try to do more with his Bond, any changes he would have suggested probably would have fallen on deaf ears.

So how do we define the career of Roger Moore as James Bond? Fleming fanatics consider him the worst by far. Movie critics generally dismissed Moore, and they continuously complained about how he wasn't like Sean Connery. The general movie-going audience, however, accepted Moore in the role, and spent a lot of money going to see his Bond movies. As I stated at the beginning of this post, many who grew up watching Moore as Bond are now in a position to appreciate him, and many have done so, especially on the internet. The fact that Moore still makes himself accessible to the public, and the fact that he is willing to admit how much he enjoyed being the character, has enabled him to retain a major fan base to this day.

Did you know that before Daniel Craig came along, Roger Moore was the only English-born actor to play James Bond in an official 007 film? (Sean Connery is Scottish, George Lazenby is Australian, Timothy Dalton is Welsh, and Pierce Brosnan is Irish.) Moore also holds the current record for having played Bond for the longest consecutive time--seven movies from 1973 to 1985.

I don't think Roger Moore was the perfect film Bond. But when I was a kid, he WAS James Bond--and that meant a lot. Moore only made one truly great Bond film, but all his series entries are entertaining in a goofy sort of way.