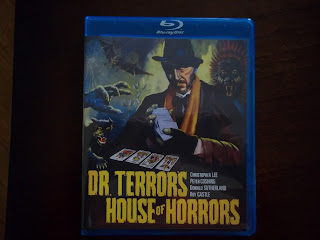 One of the most frequently requested titles by film buffs to be released on home video has finally come out from Olive Films. The 1964 horror anthology DR. TERROR'S HOUSE OF HORRORS is now available on Region A Blu-ray and Region One DVD.

(Before I go own, I am well aware that Odeon has released a Region B Blu-ray of this title with loads of extras. As I've mentioned many times on this blog, I do not have a region-free Blu-ray player. A few of my internet friends have wondered why I don't have one...well, I'll tell you the real reason why. I spend way too much money on DVDs and Blu-rays as it is. If I did have a region-free player, I'd be spending even more money on stuff. I'm a working-class guy from Indiana...I'm certainly not rich. When you see me review a DVD or Blu-ray on this blog, it is a movie I have actually bought. No company sends me freebies, or screeners....and I don't expect anybody to do so. If anyone is interested in sending me free product, you are more than welcome to do so--just don't expect me to kiss your behind for you.)

DR. TERROR'S HOUSE OF HORRORS is a legendary title in classic horror film history. It is the very first anthology film made by Amicus, the English-based production company run by Americans Milton Subotsky and Max J. Rosenberg. The duo had already made one of the best modern Gothic thrillers ever, 1960's CITY OF THE DEAD (aka HORROR HOTEL) under the name Vanguard Productions. Milton Subotsky (who wrote the script for DR. TERROR) was inspired to use the multi-story format by the 1945 British film DEAD OF NIGHT. I wonder, however, if the success of AIP's 1962 TALES OF TERROR had an influence on Subotsky. The very first tale in DR. TERROR references a character named "Cosmo Valdemar", and one of the tales in TALES OF TERROR is "The Case of M. Valdemar"--I'm sure that was more than a coincidence. I also believe Subotsky noticed the wave of American anthology TV shows of the early 1960s such as THE TWILIGHT ZONE and ALFRED HITCHCOCK PRESENTS. Like those shows, the stories in DR. TERROR feature a "twist" ending.

The "linking" story in DR. TERROR (that is, the story that links all the other tales together) concerns five strangers in a train compartment (played by Christopher Lee, Roy Castle, a very young Donald Sutherland, Alan Freeman, and Neil McCallum). The five are joined by the mysterious Dr. Schreck (Peter Cushing), who proceeds to tell each of the men their futures through the use of the Doctor's deck of tarot cards. The fates of the men are dramatized in five separate tales--"Werewolf", "Creeping Vine", "Voodoo", "Disembodied Hand", and "Vampire". As one can tell by the titles, the tales are rather simple and to the point.

I feel the best of the stories is "Disembodied Hand", which has Christopher Lee as arrogant art critic Franklyn Marsh. Marsh is publicly embarrassed by artist Eric Landor (Michael Gough), and the critic is so angered by this he runs over Landor with his car. Landor has to have his hand amputated as a result, and since he no longer can paint, the man commits suicide. Landor's hand, however, refuses to die....and it comes back to wreak vengeance on Marsh. The segment is very creepy and well-directed, but what makes it work is Christopher Lee's portrayal of the snide, stuck-up Marsh.

The other stories are okay, not great. Five stories may have been one too many (the movie has a 98-minute total running time). It is the linking segment that makes the biggest impression. Peter Cushing takes an obvious "spooky" character in Dr. Schreck (schreck means "terror" in German) and underplays him in a wonderful manner. Instead of the usual scary trappings, Cushing uses subtlety to make Schreck into a quietly sinister figure. Peering out from under Schreck's bushy eyebrows and wide-brimmed hat, Cushing's penetrating stare does more than a hundred pounds of monster makeup. Cushing walks away with the film, despite the fact that he spends most of his time sitting in a train compartment surrounded by five other actors. It is a brilliant example of Cushing's acting talent, and how he could do more with less.

All in all DR. TERROR is a more important film than a great one. The movie started Amicus on its run of several horror and science-fiction films over the next decade. Amicus became a major rival to Hammer Films, and Milton Subotsky would always go out of his way to denigrate Hammer. Subotsky may have been a bit jealous, because Amicus used many on and off-camera talent connected to Hammer. DR. TERROR director Freddie Francis had already made films for Hammer, and of course Peter Cushing and Christopher Lee became famous from their association with the company. DR. TERROR has other actors familiar to Hammer fans, such as Peter Madden, Katy Wild, Michael Gough, and Isla Blair. Makeup artist Roy Ashton, who created many of Hammer's best monsters, also worked on DR. TERROR, and he would go on to have a long career with Amicus.

I first saw DR. TERROR on television back in the 1980s. Obviously it wasn't shown in widescreen back then. Watching a pan-and-scan version of DR. TERROR is a waste of time, because Freddie Francis and cinematographer Alan Hume filled the 2.35:1 frame with all sorts of striking compositions. When Francis used the 2.35:1 aspect ratio (as he also did with the 1965 Amicus film THE SKULL), he really used it. DR. TERROR simply has to be seen in widescreen, and that is why it has been so frustrating that the movie did not have a proper American home video release until now. I had a VHS release of DR. TERROR that not only was pan-and-scan, but also had a terrible print of the film, and a cheap looking video box design.

Even when DR. TERROR would show up on TV in recent years, the print still looked bad. This Olive Blu-ray will be a revelation to those who have not seen DR. TERROR in a long time. It is in 2.35:1 anamorphic widescreen and it is the best I have ever seen this film look. The transfer is very colorful--just check out Schreck's tarot cards--and it really brings out Freddie Francis' set-ups. (The Paramount logo is even at the start of the film.) The sound is clear and full as well.

This Blu-ray release has no extras. That's a bit disappointing, but I think the important thing here is the release of the movie itself. As I stated at the beginning of this post, DR. TERROR has long been on the "Most Requested Blu-ray releases" lists. It may not be the best Amicus anthology film (for the record, my personal pick is THE HOUSE THAT DRIPPED BLOOD), but it is a major part of classic horror film history, and it is one of the most famous of all the Peter Cushing-Christopher Lee team-ups.