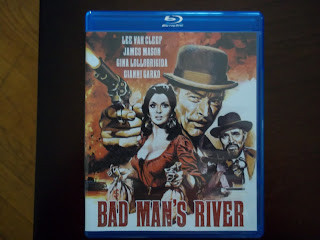 Just like CAPTAIN APACHE, this movie has ties to the cult Euro-horror hit HORROR EXPRESS--namely producer Bernard Gordon and director Eugenio Martin. Unfortunately BAD MAN'S RIVER makes HORROR EXPRESS look like CITIZEN KANE. The "bad man" of the title is Roy King (Lee Van Cleef), who, along with his gang, gets caught up in the Mexican Revolution. The "Gringo involved in war south of the border" plot was already overused by the time this film was made in 1971, and BAD MAN'S RIVER does it no favors.

King winds up having to deal with con artist Alicia (Gina Lollobrigida) and her husband Francisco Montero, who is played by none other than James Mason. Yes, you read that right....James Mason actually appeared in a spaghetti western.

In CAPTAIN APACHE Lee Van Cleef got a chance to sing the title song. Here he doesn't get to do the honors, but the title song for BAD MAN'S RIVER is head-scratching enough on its on. It's a jaunty ditty more suited for a 1960s mediocre American TV sitcom. There are other songs spread throughout the movie as well, and they all comment on what is going on story-wise in a very contrived fashion. One of the tunes is a psychedelic hard rock number.

These musical numbers are just one of the examples of the mixed-up attitude BAD MAN'S RIVER has. For the most part the movie tries to have a lighthearted tone, but when it's time for the shooting to start, tightly edited action scenes take over. Towards the climax the film really goes off the rails with cartoon-like gags and characters acting silly. Van Cleef, fitted out in a toupee and a bowler hat, is presented as a notorious bandit, but he's nowhere near as vicious as he is in most of his Euro-Western roles. (He does get to kill a lot of people here, though.) As in CAPTAIN APACHE, Van Cleef gets to do more than just his usual "Colonel Mortimer" type of role. The actor climbs into bed with Lollobrigida (in CAPTAIN APACHE, Van Cleef hit the sack with Carroll Baker) and he even does a drunk scene. The veteran Western heavy probably enjoyed this change of pace, but his fans would have more than likely prefered to see the typical Lee Van Cleef persona.

As for James Mason, he doesn't show up till about an hour into the story. Exactly why he decided to do this movie is hard to fathom--any actor could have played his character, there's really nothing special about it. The role is supposed to be that of an important Mexican with major connections--but for some reason Mason attempts to do an American Southern accent! (I say "attempts" because he doesn't quite pull it off.) Seeing Mason exchanging dialogue with Lee Van Cleef is unusual, to say the least.

The most important role in BAD MAN'S RIVER belongs to Gina Lollobrigida. It is she who sets the plot in motion, and it is she who manipulates almost all the other characters in the story. For all of their supposed "badness", Roy King and his goofy gang spend most of their time being suckered into one precarious situation after another. It's a rarity for a spaghetti western to have a major female role determine the outcome of the plot, and it is about the only noteworthy element of BAD MAN'S RIVER.

One other cast member I have to mention is Aldo Sambrell. This actor has to hold the record for appearing in more spaghetti westerns than any other performer....name any famous title in this particular genre and chances are he was in it.

Veteran Hollywood screenwriter Phillip Yordan worked on BAD MAN'S RIVER (as he did on CAPTAIN APACHE), and you have to wonder how he felt if he ever did see how this picture turned out. Eugenio Martin handles the action scenes well, but when it comes to the "comedy" it mostly falls flat. For some reason, during the first ten minutes of the film, the director uses an annoying freeze frame technique to transition between scenes--and then he never uses it again for the rest of the running time.

Kino presents BAD MAN'S RIVER in 2.35:1 anamorphic widescreen. The visual quality varies from scene to scene, but considering this is such an obscure title, I doubt you are going to find a better version of it anywhere else. I do have to mention that the sound is clear and full. The only extras are a couple of trailers for other Kino Western releases.

BAD MAN'S RIVER, simply put, is a mess. But if you've always wanted to see Lee Van Cleef and James Mason co-starring in a movie directed by the guy who made HORROR EXPRESS, this is the film for you!
Posted by Dan Day, Jr. at 3:28 PM