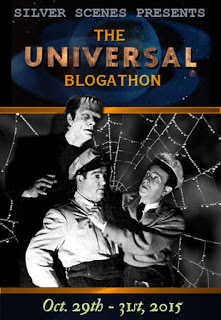 This is my contribution to the Universal Pictures Blogathon hosted by Silver Scenes (silverscenesblog.blogspot.com)

Out of all the great Hollywood studios, Universal, by far, is my favorite. That should be no surprise to anyone who has read a few of my blog posts. I am a lifelong classic monster movies fan, and nobody did classic monsters better than the Big Globe. One could say that Universal created and defined the classic American Gothic horror film.

But there's more to my love for Universal than just monster movies. Even before I became an "official" movie geek, I was watching Universal product. When I was a little kid, TV stations like WGN Channel 9 in Chicago showed Universal films constantly--especially during weekends. Two series in particular--the Sherlock Holmes movies with Basil Rathbone and the Abbott & Costello comedies--I remember seeing over and over again.

I'm sure most of my Sunday mornings as a youngster involved me checking out a Sherlock Holmes adventure or Bud & Lou getting into another mix-up. I own most of those films--and the Universal monster classics--on home video, and they are as familiar to me as the roads in my neighborhood. Most of Universal's on and off-camera talent in the 1940s worked in all three series, which gave the movies even more of a "old friends" type of feeling.

As I grew up and began to learn about the history and the making of these Universal classics, I started to see them in a new light. A certain performer who I knew from the Universal horrors would suddenly wind up being a foil for Abbott & Costello, while someone who played a straight role alongside Bud & Lou would turn up as a suspect in a Sherlock Holmes mystery. Directors, screenwriters, and producers would also bounce between the series.

The result is that when one watches any of the Universal series entries now, one appreciates even more the talent involved in making them. Universal was a full-time working studio and they churned these movies out at an incredible pace--but these pictures still entertain (and gain new fans) in the 21st Century.

HERE COME THE CO-EDS, released in 1945, isn't one of Universal's most famous films--it's not even considered one of Abbott & Costello's most famous films. But it happens to be a favorite of mine, and whenever I take part in a blogathon, I try to choose a subject that may not be well-known.

HERE COME THE CO-EDS has Abbott & Costello going to an all-girls school. If you have any lewd thoughts, put them away--this isn't a 1980s raunchy sex comedy. (The person that gets the most romantic action in this story is Lou Costello!)

Bud Abbott (as Slats) and Lou Costello (as Oliver) play taxi dancers at a ballroom. Slats' sister Molly (played by the lovely Universal starlet Martha O'Driscoll) also works at the ballroom, and Slats tries to get her some publicity by running an ad saying that Molly is only dancing to earn enough money to go to Bixby College. Bixby's free-thinking Dean (Donald Cook) reads the ad and offers Molly a scholarship. Molly accepts, and gets Slats and Oliver hired as campus caretakers.

Of course having Bud & Lou take care of anything is asking for trouble. The head caretaker at Bixby is a big, ornery cuss named Johnson. He is played by none other than Lon Chaney Jr., who at the same time was playing the Wolf Man, the Mummy, and the leading roles in Universal's "Inner Sanctum" series. It may seem strange for Lon Jr. to be in such a role--he doesn't even get any special billing--but the erstwhile monster man is perfect as a comic villain. Lon spends the entire movie in a ticked off mood--was he angry that the studio stuck him in this part?--and his byplay with Lou is fantastic. Lon Jr. would more famously co-star with Bud & Lou a few years later in ABBOTT & COSTELLO MEET FRANKENSTEIN, and I'm sure many viewers of that film don't even realize that Chaney had already dealt with A & C. 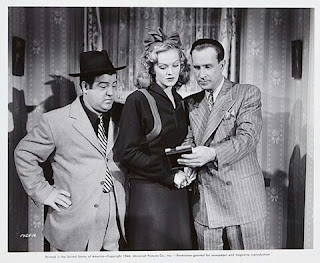 
Bixby College is in trouble--the stuck-up Chancellor is mad at the Dean's forward-thinking ways, and the school is in danger of being closed. Slats, Oliver, Molly, and the students decide to try and raise money to save Bixby, and a big basketball game is planned with rival Carlton. Slats and Oliver bet big money on Bixby to win, and gamblers hire professional women basketball players to serve as ringers for Carlton. (Can you imagine what the NCAA would think about this?) Oliver winds up serving as a ringer himself, and after he is hit on the head and knocked out by the ball he is convinced that he is the greatest female basketball player of all time.

Many legendary film comedians, such as Chaplin, Lloyd, and Keaton, had great athletic prowess, and Lou Costello was no exception. Most people assume that since Lou was short and chubby, he really was a klutz....but Lou was a fine athlete as a youngster, and he even worked as a stunt man in Hollywood during the 1920s. In every A & C movie Lou had to perform several pratfalls, and there's more to physical comedy than just plain falling down. Costello was a pratfall artist, and HERE COME THE CO-EDS gives him numerous opportunities to show off this skill. Even before the big basketball game Lou has to go through a wrestling match, and even though doubles were used for most of the scene, Costello still takes a beating. The basketball match really gives Lou a chance to shine. Lou was a semi-pro hoops player in his younger days, and he pulls off many trick shots during the scene.

The basketball court scenes were actually filmed on Universal's famous Phantom Stage (did Lon Jr. appreciate the irony of this?). During the halftime of the game a musical number is staged featuring Peggy Ryan as Patty, the co-ed who happens to be Oliver's love interest. Peggy Ryan is as cute as a button in this film (so cute that the viewer doesn't mind that she is about 20 years younger than Costello), and she and Lou make a entertaining couple. Ryan and Costello even get their own song and dance number, "Let's Play House". Peggy Ryan made a number of musicals at Universal with Donald O'Connor, and during HERE COME THE CO-EDS Lou even mentions that he feels like O'Connor. The other musical numbers in the film are provided by Phil Spitalny's All-Girl Orchestra, featuring Evelyn and her magic violin (seriously, that is how they are billed in the movie). A & C fans always feel that the musical numbers in their films are intrusive, but at least here it makes sense that an all girls college would have an all girl orchestra.

Martha O'Driscoll is very appealing--and very photogenic--as Molly. She's so gorgeous you have to wonder how Bud Abbott could be playing her brother. O'Driscoll would go on in 1945 to co-star again with Lon Chaney Jr. in HOUSE OF DRACULA.

Director Jean Yarbrough had already directed an A & C film--IN SOCIETY--and he would direct them in the future, including some episodes of Bud and Lou's TV show. Yarbrough also directed such Universal thrillers as HOUSE OF HORRORS and SHE-WOLF OF LONDON.

Is there anything particularly special about HERE COME THE CO-EDS? Well, maybe not...but if you watch the movie, you'll have a good time. There is a lot of prime A & C material here--such as Lou swallowing Lon Jr.'s trick dice, resulting in Lon and Bud "shaking" Lou and betting on the outcome. A funny scene is Lou trying to tell some of the students a joke concerning a whale, only to have Bud totally ruin his story. The basketball sequence is a treat, and there's even a wild chase scene after that. Peggy Ryan is a happy bundle of energy, and monster fans will enjoy seeing Martha O'Driscoll and Lon Chaney Jr. in "ordinary" roles. Universal may have cranked out these type of movies like a factory, but the fact is that HERE COME THE CO-EDS is now 70 years old, and it still does what it was designed to do--entertain you and make you laugh. You have to give the Big Globe some credit for that.


(Most of the information in this post comes from Bob Furmanek and Ron Palumbo's excellent book, ABBOTT & COSTELLO IN HOLLYWOOD.)