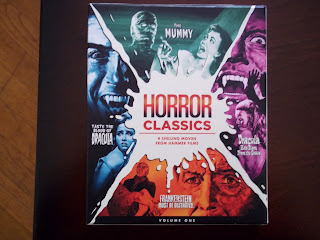 If you have read even only a few entries on this blog, you'll know that I am a long-time fan of Hammer Films. I belong to a few Hammer groups on Facebook and I try to keep up with anything Hammer-related on the rest of the internet.

One thing I have noticed about Hammer fans on the internet over the past couple years is how...ahem, passionate they have become. When I say "passionate" I mean that just about any major discussion concerning the company on social media lately has wound up resulting in a full-blown cyber argument.

If you want to really get Hammer fans going, mention a Blu-ray release of a Hammer movie...any Blu-ray release. Chances are half of the replies will say the particular Blu-ray in question is a magnificent piece of work, and the other half will say that the makers of the Blu-ray screwed up big time.

For many Hammer lovers the home video releases of the company's product are a source of frustration, especially so for American fans. It took years for several Hammer titles to get even a decent DVD release, and now film buffs are clamoring for those titles in HD. Most of the Hammer Blu-rays are Region B, and many in the U.S. either can't afford or just don't want to get a region-free Blu-ray player. There's a few Hammer Region A Blu-rays out there....a couple years ago Millennium brought out two fine Region A releases with FRANKENSTEIN CREATED WOMAN and DRACULA PRINCE OF DARKNESS. This led to hopes that Millennium would follow up with more Hammer product geared for the American market, but so far they have not.

Even if you live in North America and you do own a region-free player, you may still be mystified in trying to figure out what Hammer Blu-rays to get. Ask any five self-styled "experts" on Hammer movies about a certain Blu-ray and you will likely get five different answers. You'll also probably get five different opinions on the visual quality of the disc, and on whether the aspect ration is correct (I've actually seen people threaten one another on the internet over the "proper" aspect ration of a certain Hammer film). What gets me about these experts is that many of them were not even born when most of the Hammer product was released in theaters.

Warner Brothers owns the U.S. home video rights to several of Hammer's most famous and greatest films. For years fans have hoped that Warners would start putting out this Hammer product on Blu-ray. Finally Warners has with the recent release of HORROR CLASSICS VOLUME ONE, a set featuring THE MUMMY, DRACULA HAS RISEN FROM THE GRAVE, TASTE THE BLOOD OF DRACULA, and FRANKENSTEIN MUST BE DESTROYED.

I have a long time personal relationship with these films. DRACULA HAS RISEN FROM THE GRAVE and FRANKENSTEIN MUST BE DESTROYED I first saw on Svengoolie in the mid 1980s. THE MUMMY and TASTE THE BLOOD OF DRACULA I first saw on the American TV network TBS--back in the 1980s TBS would actually show Hammer movies in prime time.

I taped these movies off of TV broadcasts--and of course they were edited, and the prints looked horrible, and they were not in widescreen. I bought all of these films on VHS...and when each of them came out on DVD, I bought them again. The Warner Hammer DVDs hold up rather well--some say that these DVDs still look better than some of their Region B Blu-ray counterparts. The Warner Hammer DVDs are also still widely available, due to the fact that Warners has re-released and re-packaged them almost as many times as Universal has re-released all their classic monster movies. I bet if you go over to your local WalMart or Target you can find a cheap Warner Hammer DVD set.

How do the four films look on this Blu-ray set? In my opinion THE MUMMY looks the most impressive, despite the fact that it is the oldest of the quartet. (I think that has to do more with the cinematography of Jack Asher and the staging of director Terence Fisher more than anything else.) DRACULA HAS RISEN FROM THE GRAVE looks brighter than I have ever seen it before, and that might be a plus for some, and a minus for others (the supposed nighttime scenes in this movie don't look very night -like). Both FRANKENSTEIN MUST BE DESTROYED and TASTE THE BLOOD OF DRACULA look a bit better than the DVD versions...but not, I feel, especially so. (Once again, I must point out this is my personal feeling on the matter. I don't presume to know how these movies are supposed to look.)

As for the aspect ratios, the framing appears fine to me for the most part...there's some scenes here and there in the entire set that look a bit tight, but overall I don't believe it is a big problem. What I really took most from this set was how much better the movies sounded. The audio quality on all four is fuller and richer than I've ever heard any of them being before. I noticed background noises such as, for example, the rustle of Veronica Carlson's skirts in FMBD. (By the way, my FMBD DVD had a slight static noise on the main soundtrack. That is eliminated on the FMBD Blu-ray.)

As for the extras...well, there are no extras (except a trailer for each particular film). One of the main highlights of the Region B Hammer Blu-rays is the copious amount of extra material for each disc. The Warner Hammer DVDs didn't have any extras either, and one would assume that as an incentive to get fans to double-dip, the Blu-rays would have featured something. I have to consider this a sore spot. Veronica Carlson, who plays the female lead in half the films on the set, regularly graces movie conventions with her presence, and I'm sure she would have been more than happy to take part in an audio commentary, or at least a ten-minute on-camera interview. The four films on this set are some of the most famous Hammer ever made--they should have been put into some sort of historical perspective.

If you are a Hammer fanatic, you no doubt own all of these films already, and you more than likely have bought them in multiple formats. Overall, this set is an upgrade. It's a nice set....but, I wouldn't say you have to drop everything and get it. It's not like the Warner Hammer DVDs were of subpar quality. There are some who might just choose to wait and see if they can get it later at a lower price....and that's fine.

On the other hand, if Warners had included some informative commentaries, or some interviews with surviving cast members, then I would have said it was a must buy. These are cult genre films with a specific core fandom, and that fandom expects something more than the usual bare-bones release.

I have to mention that all four of these films are also available separately on Blu-ray. If you want to limit yourself to a single title, I would purchase THE MUMMY before any of the others.

Once again, I'd like to point out that I am not saying you should not buy this set. It is a worthy purchase--I just think it could have been even better. I've seen some bloggers say that if you criticize this set in any way, Warners won't come out with a HORROR CLASSICS VOLUME TWO--in other words, the fans "owe" it to Warners to support this set wholeheartedly. I find that kind of thinking ridiculous--I don't owe any home video company anything, except my honest opinion. Of course I want to see a Volume Two with THE CURSE OF FRANKENSTEIN and HORROR OF DRACULA. But consider this.....the name of this Blu-ray set is not HAMMER HORROR CLASSICS....it is HORROR CLASSICS. If there is a Volume Two, it may not contain any Hammer films whatsoever.
Posted by Dan Day, Jr. at 3:46 PM