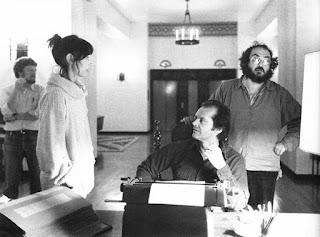 ROOM 237 is not so much a documentary as it is an examination of the supposed "meaning" of Stanley Kubrick's film adaptation of THE SHINING. The result is a fascinating exercise--a film geek's dream, if you will--but there were a couple times I couldn't help but laugh out loud.

About a half-dozen theories are presented on what THE SHINING is really about. Among the theories are one claiming that Stanley Kubrick was commenting on the United States' wars against the Native Americans, another claims that THE SHINING is a metaphor for the Holocaust, and another says that the movie is Kubrick's way of admitting that he was involved in creating fake Moon landing footage for NASA!

The faces of the theorists are never shown on camera, but director Rodney Ascher allows us to hear their voices as they state their cases. You may disagree with the commentators, but those involved are serious in their beliefs, and they do make a number of intriguing points and observations. They also manage to point out a number of things about THE SHINING that I personally never would have noticed on my own.

I do have to say, however, that one reason I wouldn't have noticed some of those "things" about THE SHINING is because I wouldn't have been looking for them. I'm not one of those people who go out of their way to look for hidden motifs or continuity errors. That's because I'm actually trying to watch the movie. A number of continuity gaffes are brought up in ROOM 237, and the commentators insist that these gaffes have to have some sort of meaning, simply because Stanley Kubrick was Stanley Kubrick. A brilliant filmmaker like Kubrick wouldn't have allowed such mistakes to happen now...would he?? No matter how much money, or talent, is involved in making a film, human beings are going to make mistakes.

The constant obsession over continuity errors, or over what may be hanging on a wall in the corner of a set, seems more to me like overreaching than exhaustive analysis. There's an old expression--"If you look for something hard enough, you'll find it." In other words, if you are convinced that a movie has a "special meaning", you will interpret everything you see to fit your assertions. Film geeks are notorious for over-analyzing content to the point of exhaustion--I'm as guilty of this myself as much as anybody. Any film, whether it be THE SHINING or the latest Adam Sandler feature, can be looked at a million different ways by a million different people.

Fact is, you could easily give the ROOM 237 treatment to every movie ever made. If I wanted to, I could come up with all sorts of subtexts for even the most boring of pictures--but that wouldn't mean that what I came up with had any merit.

My personal feeling is that the theories advanced in ROOM 237 are just that--theories. The one that I would automatically dismiss out of hand is the "Kubrick made fake moon footage for NASA" theory. I don't buy that at all for one simple reason--Kubrick was the ultimate iconoclast. There's no way I could imagine him helping the U.S. government lie, even if they offered him a bunch of money to do it.

If you are a Kubrick aficionado, or you love THE SHINING, you should see ROOM 237. There is so much footage from THE SHINING in ROOM 237 that it is kind of like seeing a alternate version of the Kubrick picture. ROOM 237 also uses scenes from just about every other Stanley Kubrick production, along with movies such as John Ford's DRUMS ALONG THE MOHAWK and F. W. Murnau's FAUST. Whether you will look at THE SHINING in a new way after seeing ROOM 237 is totally up to you. Sometimes a missing chair is just a missing chair, and a picture on a wall is just a picture on a wall.

One of the reasons that Stanley Kubrick is considered such a legendary filmmaker is that all of his movies--2001: A SPACE ODYSSEY, A CLOCKWORK ORANGE, BARRY LYNDON, LOLITA, etc.--can endlessly be debated and discussed. There's no real right or wrong way to define a Kubrick film, including THE SHINING. If ROOM 237 reminds us of anything, it is that Stanley Kubrick left a body of work that will be studied and argued about for years to come.