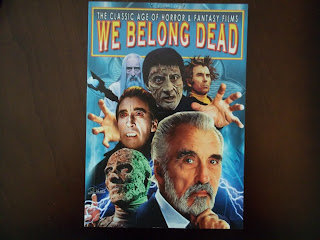 With the passing of Sir Christopher Lee earlier this year, one expects several tributes to come in honor of the legendary screen icon. Eric McNaughton's WE BELONG DEAD magazine more than capably fills the definition of a tribute in the form of a 100-page special edition fully dedicated to the man and his films.

Edited by McNaughton and designed by Steve Kirkham, WE BELONG DEAD #17 is a full-color spectacular, with numerous movie stills, poster images, and Lee-inspired artwork. The articles within reflect upon the entire length and breadth of Lee's magnificent career. Thankfully not all the movies discussed are the "usual suspects"--we get looks at such titles as NIGHT OF THE BIG HEAT, TO THE DEVIL A DAUGHTER, and THE TERROR OF THE TONGS. Even the controversial JINNAH is examined with Tony Earnshaw's interview with director Jamil Dehlavi.

Troy Howarth contributes an informative (and much needed) essay on Christopher Lee's Continental (European) horrors, a group of films I feel has not been given enough analysis. Matt Gemmell Robertson shares what it was like for a Lee aficionado to actually meet the Great Man. And Darrell Buxton writes a small summary of Lee's musical output.

The issue features an eclectic and wide-ranging series of articles, and that makes it all the more impressive. Combined with the superb layout of stills and posters, and the fine artwork (check out the photos of the front and back covers in this post), WE BELONG DEAD #17 winds up being a worthy keepsake for any admirer of Christopher Lee. The issue is so well done that I can't help but feel that there should be further WBD special issues in the future (the possibilities are endless).

For ordering information go to www.webelongdead.co.uk 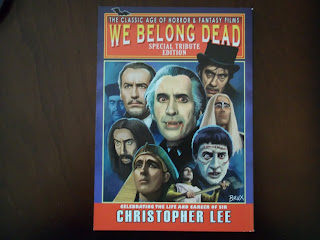