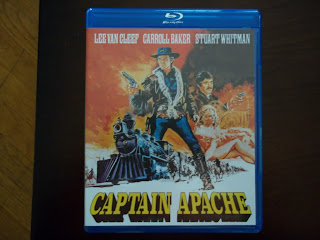 A number of films starring cult Western legend Lee Van Cleef have been released on home video in the last few years--films such as THE BIG GUNDOWN, DAY OF ANGER, and BARQUERO. Now Kino has come out with two more movies featuring the gaunt-faced gunman. According to the outstanding DVD Drive-In website, these titles--CAPTAIN APACHE and BAD MAN'S RIVER--were both produced by the same team behind the great Peter Cushing-Christopher Lee Euro-horror flick HORROR EXPRESS. Let's first look at CAPTAIN APACHE.

CAPTAIN APACHE shows its strange cinema credentials from the very beginning. The title song is sung by none other than Lee Van Cleef!! Well, actually, he talk-sings it...which makes me wonder what Van Cleef could have done as Henry Higgins in MY FAIR LADY. Anyway, while this "song" is going on, we see a montage of scenes from the movie itself--it's like watching a trailer for the film, during the film.

After this auspicious start we are introduced to Van Cleef as Captain Apache. Van Cleef's character is never really given a proper name in the story, unless I missed it somehow. Most of the other characters here give the Captain the rather politically incorrect sobriquet of "Red Ass"--and they do it to his face, no less. Apparently this is supposed to be some type of running gag, which tells you much about the quality of this film.

Why Captain Apache is an officer in the U.S Cavalry is never explained--the screenwriters must have felt that having a Native American inhabit this role would be interesting, but this isn't the type of movie that would take advantage of such a dichotomy. To make him look more "Indian", Van Cleef is fitted out with a bad toupee and what looks like about a gallon of spray-on tan. The actor is also without his usual mustache.

The Captain is investigating the murder of a prominent Indian Commissioner. The only lead is the Commissioner's last words--"April Morning". Just about everyone who knows something about the phrase winds up getting killed off soon after the Captain encounters them. Eventually the Captain uncovers a conspiracy of national proportions.

Despite the expectations one would have, CAPTAIN APACHE is not a typical Lee Van Cleef spaghetti western. Van Cleef spends more time questioning people here than shooting them--he doesn't rack up nowhere near the body count he usually does in his other films. Not only does Van Cleef get to sing, he also gets to have a kind-of romance with Carroll Baker, who plays a mysterious dance hall madam. At one point Van Cleef even strips down to a loincloth and gets to show that even though he was 46 when this film was made, he was still in fantastic shape. In both CAPTAIN APACHE and BAD MAN'S RIVER Van Cleef plays the opposite of his usual "Colonel Mortimer" roles, and that may be the main reason the actor decided to star in the two films (I certainly hope he didn't pick them for their scripts).

At 94 minutes, CAPTAIN APACHE is a bit too long for its rather thin plot. A lot of the scenes appear to be nothing more than padding--whenever Van Cleef picks up a new lead, it winds up being a dead end. There's one off-the-wall sequence in which the Captain is forced to take a potion concocted by an old native witch, and this causes him to have a "vision" concerning the Indian Commissioner's death. Among the supporting cast are veterans such as Stuart Whitman (who goes out of his way to make sure everyone in the audience knows he's the bad guy), and Percy Herbert, who is a long way here from his roles in THE BRIDGE ON THE RIVER KWAI and MYSTERIOUS ISLAND.

During the end credits Van Cleef gets to sing again--and this time it's not talk-singing. The song is "April Morning", referring to the plot of the film. Those interested should go on YouTube and experience Van Cleef's CAPTAIN APACHE set list for themselves--there's no way I can do them justice by attempting to describe them. ("I've gotta daaaaaatttteeee with an April Morning.....")

CAPTAIN APACHE was co-written by longtime Hollywood screenwriter Phillip Yordan and directed by Alexander Singer, who had a long career in American television. Needless to say, Sergio Leone didn't have much to worry about from this film.

Kino's Blu-ray of CAPTAIN APACHE is presented in 2.35:1 widescreen. The picture quality is decent at best, but considering the number of public domain copies of this title floating around, it is doubtful there is a better transfer available. There are no extras, except a couple trailers for other Kino releases featuring Lee Van Cleef.

I bought both CAPTAIN APACHE and BAD MAN'S RIVER from Amazon at $11.50 each, which is around what these Blu-rays should be worth. I certainly wouldn't get them at a price over $20. These movies are for hard-core Lee Van Cleef fans, or people like me who spend too much money on weird obscure cinema.