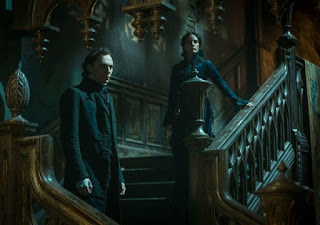 Guillermo del Toro is one of the few interesting film directors regularly working today. His latest effort is CRIMSON PEAK, a dark Gothic romance thriller set during the turn of the 20th Century.

Many have consider CRIMSON PEAK to be del Toro's tribute to Hammer Films, since the surname of the lead character is "Cushing", and lead actor Tom Hiddleston, in his Victorian costumes, very much resembles a young Peter Cushing. I feel, however, that CRIMSON PEAK is very reminiscent of the Italian Gothic chillers of the early 1960s, particularly those directed by Mario Bava and Riccardo Freda. CRIMSON PEAK not only has the sumptuous art direction of those Italian horrors, it also matches them with a storyline featuring false marriages and perverted family secrets.

If you are looking for a hard-core horror tale, CRIMSON PEAK is not it. The movie name drops such authors as Jane Austen, Mary Shelley, and Arthur Conan Doyle, and the three main characters are all archetypes of classic Gothic romantic fiction--young, innocent, repressed heroine, mysterious English aristocrat, and intimidating older sister.

The imaginative Edith Cushing (Mia Wasikowska), who aspires to be a writer, is swept off her feet when the dashing Sir Thomas Sharpe (Tom Hiddleston) comes to America to ask Edith's father for help in restoring the Sharpe family's mining operations. Edith's father doesn't trust Sharpe, or his imperious sister Lucille (Jessica Chastain). Mr. Cushing tries to bribe Sharpe into leaving his daughter alone, but the elder man is viciously murdered, and Edith winds up marrying Sharpe and going to England to live in the Sharpe family manor.

That manor is, as you might have guessed, not exactly your normal house. As a matter of fact, it is the real star of CRIMSON PEAK. It is the old haunted house to end all old haunted houses--the production design on it is so striking that it overwhelms those living in the place. The house is so baroque that it almost veers into Tim Burton territory.

And that may be the biggest problem of CRIMSON PEAK. Several times while watching the film I kept looking past the actors to check out some detail in the background. The movie looks fantastic--maybe too fantastic. Del Toro and his cinematographer Dan Laustsen use color in a way very few filmmakers do anymore. Usually what happens with 21st Century movies is that colors are de-saturated, and that is something I've frankly grown tired of. There's a lushness to CRIMSON PEAK that you just don't see from too many pictures now.

As for the supernatural element of the movie, there are a few spectral appearances--but I've never been able to be impressed by CGI ghosts. The real horror in the story is brought on by flesh & blood humans. The phrase "Crimson Peak" doesn't refer to blood--it refers to the Sharpe family manor being built on top of a large deposit of red clay. This causes the house, and the grounds, to "bleed"--a nice touch, if a bit over-obvious.

CRIMSON PEAK has fine, if understated, performances by the three leads. Tom Hiddleston may still look somewhat like Loki here, but don't expect any Loki-type histrionics. This type of movie really needs classic horror film stars to make it work. It could also do with a shorter running time--119 minutes is overlong for this kind of material.

CRIMSON PEAK is a film that appeals more to film geeks than a general audience. The movie did not open very well, and that's not surprising, especially considering that it is not anything like a PARANORMAL ACTIVITY or a FINAL DESTINATION style of thriller. I believe that it is worth seeing for its visual quality alone (but make sure you see it on the big screen at the theater). I liked CRIMSON PEAK, but I can't help wondering what the movie would have been like if it was made in 1963, and directed by Mario Bava, and starred Peter Cushing as Sharpe and Barbara Steele as the raven-haired sister. Now...that would have been something.