The Criterion Blogathon--THE MOST DANGEROUS GAME 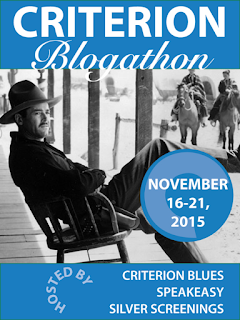 Like most film buffs, I have a fair amount of Criterion releases in my movie collection. According to my personal page on the official Criterion website, I own at least 28 Criterion DVDs or Blu-rays. That might sound impressive, but I know people who own literally hundreds of Criterion titles.

The Criterion Collection is best known for its many foreign and art films, but the company has also put out several cult classics that in no way match the definition of "pretentious". One of those releases is 1932's THE MOST DANGEROUS GAME. It is an earlier title from Criterion (the spine number is 46), and while it has nowhere near the expansive extras of the company's recent products, the DVD matches the movie's low-budget streamlined attitude perfectly.

THE MOST DANGEROUS GAME will always be compared to the original KING KONG. It was produced at RKO in 1932 during the pre-production of KONG, and both movies share many of the same on-and off-camera talent. Merian C. Cooper and Ernest B. Schoedsack often used THE MOST DANGEROUS GAME as sort of a test run for certain aspects of KONG. THE MOST DANGEROUS GAME is more than just the little brother of KING KONG--it is a fast-paced engaging thriller that stands alongside such other Pre-Code horrors as MURDERS IN THE RUE MORGUE and THE MASK OF FU MANCHU.

The film is based on the famous short story of the same name written by Richard Connell, a story that has probably been read by every American schoolchild. Famous big-game hunter Rainsford (played in the film by Joel McCrea) is shipwrecked upon a South Pacific island controlled by the mad Count Zaroff (Leslie Banks). Rainsford learns that Zaroff is a hunter as well--but the Count goes after the biggest game of all, man.

THE MOST DANGEROUS GAME has officially (and unofficially) been remade many, many times over the years, but this version is the first and the best. The screenplay by James Creelman (who worked on the script of KING KONG) adds a female element to the tale in the form of Eve Trowbridge, played by the ultimate scream queen, Fay Wray. Ms. Wray wound up doing many of the same things in THE MOST DANGEROUS GAME as she would in KING KONG, namely running around in terror and screaming a lot. Her character's appearance allows Count Zaroff to expound upon his theory that true hunters must kill first, then "take" a woman. This adds to Zaroff's menace--the audience has no doubt what will happen to Eve if the Count kills Rainsford. It also adds a kinky aspect to the film that would not have been allowed if it had been made a few years later, when the Production Code was fully enforced.

British stage actor Leslie Banks made his screen debut as Count Zaroff. Banks is best known today for appearing in Alfred Hitchcock's original version of THE MAN WHO KNEW TOO MUCH. He cuts a dangerously fine figure as Zaroff--he's one of those decadent foreign bad guys that were so much a part of the Golden Age of Hollywood. Banks suffered injuries during World War One that left half of his face paralyzed, and this results in Zaroff having a off-center look that matches his off-center personality. Banks' performance as the Count is as memorable as anything Boris Karloff or Bela Lugosi did during the same time period.

A very young Joel McCrea may strike some viewers as too young to be a renowned big-game hunter and successful author, but his All-American simplicity and ruggedness make him a perfect opposite from the Count's Old World villainy.

THE MOST DANGEROUS GAME is really a dark adventure story, but it could also be classified as a horror film in many ways. Zaroff's island has an old fortress which might as well be called a spooky old castle, and the Count has a physically afflicted servant, just like Dr. Frankenstein had Fritz. The Count saves the heads of his victims and puts them on the wall of his "trophy room". We don't get much of a look at these "trophies" (it is explained why in the audio commentary), but what we do see would have been a major shock to audiences in 1932. The movie is quite violent for the time period, and the fact that the film is only 63 minutes long makes it seem even more frantic.

Criterion's DVD of this title only has one major extra--an audio commentary by film historian Bruce Eder. Thankfully it is very well done. Eder's talk is a combination of historical facts about the production, and those involved in it, along with a thoughtful analysis of the film itself. Eder keeps to the point and does not stray from the subject at hand, which is good considering the film's short running time. There are also liner notes from film professor Bruce Kawin.

The visual quality of this DVD is good--at least it is better than the many public domain copies of this title that are available. The Criterion version of THE MOST DANGEROUS GAME can still be purchased on Amazon for a decent price. It may not be one of Criterion's most famous titles--or one of their most extra-packed releases--but this DVD of THE MOST DANGEROUS GAME shows the company's commitment to celebrating all the various forms of cinema, no matter what the genre. 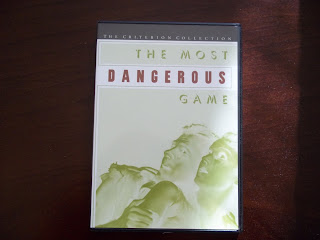 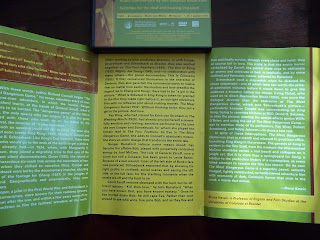 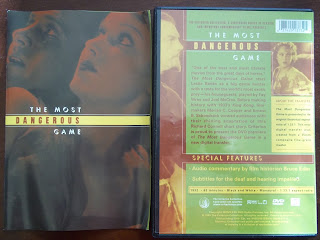