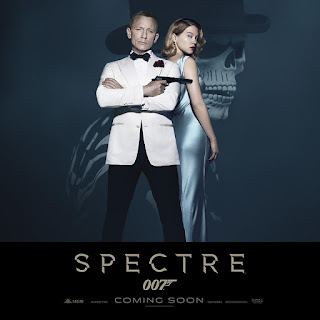 I have to admit that I'm still unsure how I feel about SPECTRE, the latest James Bond film. I didn't hate it, but I wasn't blown away by it, either. It's kind of like how I felt about the last Bond movie, SKYFALL. Could it be that I've reached the point where I can't even enjoy a James Bond flick?

I hope not, but there is one thing I became aware of when I was watching SPECTRE. I kept trying to "analyze" it, and I kept trying to figure out what I was going to put in my blog post about the movie. I really shouldn't be thinking about stuff like that--I should be sitting back and looking at the film like a "normal" person. I've found that ever since I began writing this blog, it has become harder and harder for me to put away the movie blogger uniform when I walk into a theater--and that is a bad habit I need to break.

Anyway, back to SPECTRE. This movie references all the other Daniel Craig Bond films. I'm still not sold on the idea of the 21st Century Bond movies being direct sequels to one another. The classic Bond films were not direct sequels--they were a series of films (and yes, there is a difference). I love the 2006 CASINO ROYALE--but constantly going back to it reminds one how great that movie was, and how the other Craig Bonds are somewhat lacking in comparison.

SPECTRE reveals that all the incidents that have happened to Daniel Craig's Bond were secretly masterminded by a major criminal organization known as...SPECTRE. That name will be familiar to James Bond fans, and there's plenty of other stuff will Bond lovers will recognize. (Let me say right now that I am NOT going to give away any spoilers, even though that is going to make this blog very hard to write.) If you are a longtime hardcore 007 fan, you will be reminded of THUNDERBALL, FOR YOUR EYES ONLY, LIVE AND LET DIE, THE SPY WHO LOVED ME, FROM RUSSIA WITH LOVE, and ON HER MAJESTY'S SECRET SERVICE while watching SPECTRE. Producers Barbara Broccoli and Michael Wilson must have read all those people on the internet complaining about how the Craig Bond films are not "fun" and how some of those people wish the Bonds were like they "used to be". Daniel Craig has lightened up a bit, but he's still pretty surly. The climax has several classic Bond film elements, such as a massive secret enemy lair.

But SPECTRE is still a long way from Roger Moore territory. The finished product has a lot of 21st Century darkness to it, such as a sub-plot dealing with a worldwide surveillance system, a sub-plot very reminiscent of CAPTAIN AMERICA: THE WINTER SOLDIER. Yes, it's the good old "The people who say they are protecting us are really our enemies" storyline, one that has been used so many times recently it has become stale. Like most typical modern-day big-name popcorn movies, SPECTRE clocks in at 2 and a half hours, and in my opinion it should have been a tighter, leaner film. And SPECTRE has one of those "desaturated color" schemes that makes everything look either tan or grey...this is something I'm so tired of seeing I'm thinking about writing a blog post on it. (Cinematographer Roger Deakins, who worked on SKYFALL, is absent from SPECTRE, and he is missed.)

I can't say too much about Christoph Waltz's performance without giving the whole plot away. As for the Bond girls (ahem, Bond women)....there was a lot of publicity over the fact that Monica Bellucci was cast in SPECTRE, and most of that publicity centered around the idea of James Bond being with a "mature" woman. The fact is that Bellucci has nothing more than a glorified cameo, and Bond spends most of his time in the film with Lea Seydoux's character...and she is far younger than Daniel Craig. The person who stands out the most in this movie is Dave Bautista, who plays SPECTRE's main henchman. He's probably the best Bond bad guy in years.

Overall, I would rank SPECTRE as a better-than-average Bond film. Due to spoiler considerations I can't really get into it as much as I would like (maybe when it comes out on home video I will write another post on it). There was a huge pile of money spent on this picture, and there were times I felt that director Sam Mendes wanted to make sure the audience knew how much money was spent instead of moving the story along. Right now it is still up in the air whether Daniel Craig will do any more Bond films--but if he does, I humbly submit that the franchise needs to move away from being tied to CASINO ROYALE and send Craig on a totally new Bond adventure.

Oh, one more thing....the credits song is horrible. The only Sam Smith that I am aware of is a Chicago sportswriter by that name.
Posted by Dan Day, Jr. at 1:27 PM