Every month a number of titles are added to the XfinityOnDemand free movies section. I always scan these new selections to see what sort of interesting (well, interesting to me at least) movies might pop up. This month I noticed a 1959 British feature called BOBBIKINS, which has several connections to Hammer Films. I had never seen it, and I doubt that too many other people around today have either. The film's plot revolves around a....talking baby. One of the tenets of this blog is that obscurity is the better part of valor, so I'll doubt you'll be surprised that I watched it and decided to write a blog post on it.

BOBBIKINS has British performer Max Bygraves as Ben Barnaby and the wonderful Shirley Jones as his American wife Betty. Ben has just returned from a tour of duty in the Royal Navy, and he's never even seen his 14-month old son, who is called Bobbkins. Ben and his wife were song and dance troupers when they met, and he is ready to get back in the business, when he finds out to his surprise and consternation that his son talks--and not just a few words either. The baby is able to carry on intelligent conversations, but only with his father. This leads to various complications and misunderstandings--Betty and her friend/live in maid (Billie Whitelaw) are convinced that Ben is mentally ill. Through a set of circumstances that can only happen in the movies, Bobbikins becomes friends with the Chancellor of the Exchequer (!), and due to this relationship, the baby overhears enough inside information to tell his father what stocks to buy in order to make a killing on the market. Ben is so successful he attracts the attention of a conniving stockbroker (Lionel Jeffries) and his sultry mistress Valerie (Barbara Shelley). The stockbroker has Valerie vamp Ben in order to get hot stock tips from him, leading to even more complications, such as Betty becoming jealous. Bobbikins winds up fixing things so that Ben gets out of the financial game and winds up performing with Betty again.

If you watch any British film made in the late 50s or early 60s, you're going to see plenty of actors who worked for Hammer Films. BOBBIKINS has several of them, and the best thing about the film is seeing them play "regular" characters. Along with the already mentioned Billie Whitelaw, Lionel Jeffries, and Barbara Shelley, there's Charles Tingwell, Rupert Davies, Charles Lloyd Pack, and even a cameo from none other than Michael Ripper. The movie was even directed by a Hammer veteran--Robert Day, who helmed the 1965 film version of SHE for the company. 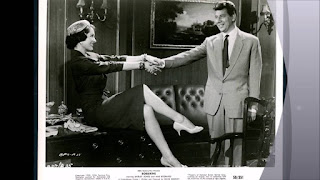 
Out of all the Hammer vets, it's Barbara Shelley who makes the biggest impression. She has a small but showy role as the seductive Valerie. Shelley takes the role and runs with it--she seemed to be having a great time while almost purring all of her lines and sitting on a desk and showing off her legs. Many have called Shelley the best overall actress to work for Hammer and BOBBIKINS gave her a chance to show how versatile she could be.

If you take away all the Hammer connections there really isn't all that much else to appreciate about BOBBIKINS. The movie is very lighthearted entertainment, and it is very reminiscent of a 1960s TV sitcom. The problem is that while a TV sitcom episode lasts 30 minutes, BOBBIKINS runs about 90--and one gets the feeling that writer-producer Oscar Brodney didn't have many more ideas after coming up with a talking baby. Max Bygraves brings a lot of energy to the role of Ben--he reminded me of an English version of Dick Van Dyke. Like the typical classic TV sitcom husband, Ben is a bit dopey while his wife Betty is the more sensible of the duo. Shirley Jones as usual brings an attractive and likable screen presence to the role of Betty, but she really doesn't have all that much to do. Both Bygraves and Jones sing multiple innocuous songs which feel like they were included to pad the running time.

The talking baby sequences are handled in a desultory manner--we are shown shots of the baby moving its mouth while a voice sounding like that of a nine-year old boy's is dubbed in. (Some of the baby's moving mouth shots are repeated.) It is never explained why the boy is able to have conversations with his father, and only him. The end of the film is also like a sitcom episode, in that everything gets tied up rather neatly and no one seems to worry whether the kid will start talking again and cause more trouble.

I would recommend BOBBIKINS to Hammer fans in particular, just so they can see Barbara Shelley in a very different type of role. The movie is more cute & amusing than actually funny.