THE ROAD TO FORT ALAMO 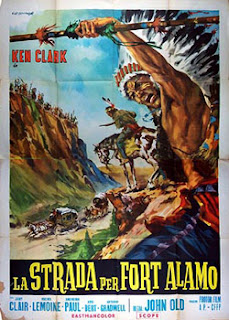 Even the great cinematic fantasist Mario Bava made Euro Westerns. His first was the 1964 feature THE ROAD TO FORT ALAMO (also known as LA STRADA PER FORT ALAMO and ARIZONA BILL). This movie was made around the same time as Sergio Leone's groundbreaking A FISTFUL OF DOLLARS, but that's the only thing the two productions have in common. THE ROAD TO FORT ALAMO attempts to be like a traditional American Western, but falls well short.

Ken Clark (one of the many American actors who made a living working in the Italian film industry in the 1960s) plays Bud Massey, a wandering cowpoke whose spread was destroyed by Yankee raiders in the Civil War. Bud comes across a group of U.S. cavalry soldiers who were slaughtered by Indians. One of the men has an official order to draw $150,000 from a nearby bank for army use. Bud takes the note and goes to the local town to inform the sheriff about it, but he and a fellow named Slim get kicked out town instead due to their protestations over a crooked card game. Slim happens to belong to a bandit gang, so Bud gets the idea to disguise the group as soldiers and "officially" claim the money. Things don't go as planned--the withdrawal turns into a robbery and Bud and Slim are betrayed by the rest of the gang. The duo wind up being found by a real cavalry patrol heading toward Fort Alamo, so they continue to pose as soldiers...but more Indians are preparing to attack the patrol, and Bud must decide whether to escape on his own or help the troop, which are accompanied by women & children.

Being that THE ROAD TO FORT ALAMO is an early example of the Spaghetti Western, it lacks many of the attributes associated with the genre. There's no quote-worthy snippets of dialogue, or cool memorable characters, or stylish and outlandish set pieces. The story does have many traditional Western cliches--there's a wise grizzled cavalry sergeant, an arrogant army captain who knows nothing of the frontier, and the idea that women & children will suffer "a fate worse than death" if they fall into the hands of Native Americans. These plot points make THE ROAD TO FORT ALAMO feel like a typical episode of a 1950-60s American TV Western instead of a feature film.

One would expect that a visual maestro such as Mario Bava would bring something extra to a tale like this, but he doesn't. Bava could handle action sequences in an impressive manner--movies like ERIK THE CONQUEROR and DANGER: DIABOLIK are proof of that. For whatever reason Bava just didn't seem suited to the Western. His usual directorial creativity and inventiveness are absent here. There are a few scenes that come close to being "Bavaesque"--a couple sequences set inside caves and some nighttime scenes obviously shot inside of a studio--but one would never guess on their own that Bava was the director of this film.

The cast doesn't really help out Bava either. Leading man Ken Clark certainly looks the part of a stalwart Western hero, but here he has almost no screen magnetism (the actor would fare much better playing a James Bond knockoff in several Eurospy movies). Actress Jany Clair makes the biggest impression as a young woman being taken to Fort Alamo on a murder charge who develops a relationship with Clark's character. The music score by Piero Umiliani is over-emphatic and intrusive.

THE ROAD TO FORT ALAMO isn't terrible, but there are plenty of other Spaghetti Westerns made by lesser directors that are far more exciting and interesting. I watched this movie on YouTube, and the video quality was not great, so maybe if I had seen a restored and remastered print of it I might have appreciated it more. Mario Bava went on to make two more Westerns--SAVAGE GRINGO (aka GUNMAN FROM NEBRASKA), a movie that according to historians Bava finished after it was started by another director, and the truly bizarre ROY COLT & WINCHESTER JACK.