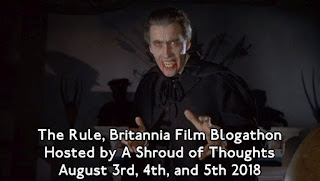 I've participated in The British Invaders Blogathon during the last few years. It is now called The Rule, Britannia Film Blogathon, and my entry this year concerns one of the great all-time British film actors making his very first British film--at the age of 45.

In March 1933, Boris Karloff and his then-wife Dorothy left their home in California and journeyed all the way to England so the actor could star in a new film for Gaumont-British called THE GHOUL. Karloff had not been in his native England since he left it in 1909. In the years after, he had struggled to make a living in his chosen profession of actor, going through several odd jobs (and marriages) along the way. Karloff's fortuitous casting as the Monster in Universal's 1931 version of FRANKENSTEIN finally obtained the actor some hard-earned success. Karloff would follow up FRANKENSTEIN with such chillers as THE OLD DARK HOUSE, THE MASK OF FU MANCHU, and THE MUMMY. Gaumont-British wanted to jump on the horror film bandwagon, and they must have figured that securing the services of the new King of Terror was a major coup.

THE GHOUL features Boris Karloff as the mysterious Professor Morlant, an archeologist who is deathly ill. The bedridden Morlant demands of his timid servant (Ernest Thesiger) that he be buried with a priceless jewel called the Eternal Light bandaged around his hand. Morlant didn't just study ancient Egypt, he believed in its gods as well. Morlant is convinced that the Eternal Light will give him immortality.

Morlant passes away (supposedly) and he is buried, per his instructions, in a special tomb he has had constructed on the grounds of his estate. Morlant's two heirs, a nephew and a niece who are cousins, travel to Morlant's house, along with many other suspicious characters, all to find out what happened to the Eternal Light. Morlant does rise from his tomb (it is later revealed that the man suffered from catalepsy), and discovers that the jewel was not buried with him. In a rage, Morlant stalks the house, determined to find the jewel and throttling anyone who stands in his way.

Gaumont-British went out of their way to bring some dark atmosphere to THE GHOUL. Cinematographer Gunther Krampf, art director Alfred Junge, and special makeup artist Heinrich Heitfeld were all veterans of German silent cinema. The sets, the black & white photography, and the nighttime settings are the major highlights of the film. Heitfeld's makeup for Karloff is very striking, if somewhat puzzling. Karloff looks like a cross between Pruneface from the Dick Tracy comic strip and Lurch from "The Addams Family", and he has two large eyebrows which resemble fuzzy worms. The strange marks all over Karloff's face are never explained, and after his "death" his countenance looks even worse, even though he's only been entombed for a short time. Apparently the makers of the film must have felt that Karloff needed some sort of gruesome makeup, despite the fact that Morlant is not a supernatural character. (Something else that is not explained is why Morlant has superhuman strength after his "resurrection", even though he wasn't too far removed from being on his deathbed and barely able to move.) 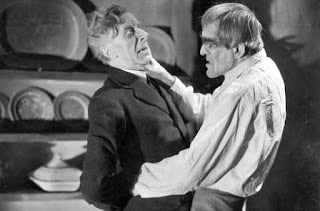 Ernest Thesiger and Boris Karloff in THE GHOUL

Despite the slight storyline, four different writers were attached to the script of THE GHOUL. Karloff only appears in the film at the very beginning and near the end, and in between the story is filled with numerous characters searching for the Eternal Light. Among the performers portraying them are three of the greatest character actors in British history. Ernest Thesiger, as mentioned, plays Karloff's manservant, and it is he who is responsible for the theft of the jewel. Cedric Hardwicke is Karloff's lawyer, a severe fellow who seems to have stepped out of a Charles Dickens novel. Ralph Richardson makes his screen debut playing a overly pleasant parson who is not all that he seems. The three grand thespians bring a lot to their rather generic roles, but one wishes that it was Karloff who had more to do. Morlant's nephew and niece are played by Anthony Bushell and Dorothy Hyson, and they are about as disposable as the typical young romantic couple in most American early sound horror films.
The niece has a best friend who tags along, a spinster-like comic relief character played by Kathleen Harrison. Way too much time is spent on this woman's attempts at wooing a shady Arab, another person after the Eternal Light.

Poor Karloff isn't even around for the climax--that involves the young couple being trapped in the creepy tomb. Most people who see THE GHOUL for the first time are invariably disappointed--Karloff doesn't have a lot of screen time, there's no supernatural elements in the story, and despite audience expectations, Boris is by definition not the fiend referenced by the film's title. The movie does have some attributes--specifically the visual atmospherics, which director T. Hayes Hunter leans on heavily. You also certainly can't be too hard on a film which contains Karloff, Cedric Hardwicke, Ernest Thesiger, and Ralph Richardson in it.

British filmmakers were not too proficient in making horror films during the early 1930s--it wouldn't be until the late 1950s that the era of the English Gothic would reach full bloom. For all its faults THE GHOUL is still better than other Karloff pictures such as THE CLIMAX and THE BLACK CASTLE. The most important thing about THE GHOUL is that it enabled Karloff to return to his native country, and reacquaint himself with most of his many siblings. Karloff would go back to England several times during the rest of his life, to work and to live, and he always considered himself an Englishman. If one is interested in seeing THE GHOUL, the MGM DVD of it has superb visual quality.

*There was another British horror film called THE GHOUL, made in 1975 and starring Peter Cushing and Veronica Carlson. This movie has nothing in common with the 1933 THE GHOUL.