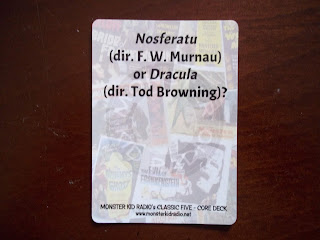 This card poses an intriguing question. What would you choose as your preference between the 1922 silent German classic NOSFERATU and Universal's 1931 version of DRACULA?

In February of 2015 I wrote a blog post review of Gary Rhodes' book on the making of the '31 DRACULA, followed by a review of Universal's Spanish version of the film. I wrote that while the '31 DRACULA has a number of setbacks, it's not as disappointing as some make it out to be. The latest Blu-ray release of the '31 DRACULA makes the movie look and sound better than ever, and that certainly brings out the picture's strengths. The '31 DRACULA isn't a perfect adaptation of Bram Stoker's novel, but it is the first important sound horror film, and it was responsible for making Bela Lugosi a pop culture icon.

NOSFERATU. on the other hand, may be the greatest silent horror film of all time. It is inherently creepy, with Max Schreck's Count Orlock the one cinematic vampire that actually resembles a corpse. Schreck's Orlock is a malignant force of evil, a pestilential disease instead of a seductive aristocrat. Most silent films have a dreamlike unreality about them anyway, and NOSFERATU is a nightmarish fairy tale without a happy ending. F.W. Murnau's use of real locations throughout the tale gives NOSFERATU the feel of a dark docudrama--if there were vampiric occurrences during the 19th Century, you feel that this is how they would have happened.

Overall I feel that NOSFERATU is far more cinematic that the '31 DRACULA. The opening sequences of the Tod Browning DRACULA are quite atmospheric, and they are justly remembered as the best parts of the film. Once the Count gets to London, however, the screenplay starts to bog down and show its stage origins. It doesn't help that the rest of the film spends a lot of time on David Manners and Helen Chandler, who come off here as rather stiff.

In NOSFERATU the dread ambiance never lets up--the young married couple and the Van Helsing-like character are no match for the death and decay that follows Count Orlock wherever he goes. Of course Murnau and his producers had the advantage of not working for a Hollywood studio, and thus not being tied down by any mainstream conventions. The filmmakers behind NOSFERATU didn't even get permission from Bram Stoker's widow to even make the movie to begin with. Which begs the question--can it even be considered a true adaptation of the novel, or something different altogether? However you define it, NOSFERATU, to me, is a far better film than the '31 DRACULA.

Now, just because you pick one film over the other doesn't mean you can't appreciate both films. The '31 DRACULA gave the world landmark performances from Lugosi, Edward Van Sloan, and Dwight Frye. It has magnificent cinematography from Karl Freund, and the beginning sequence set in Transylvania is one of the true highlights of classic cinematic horror. If only more flair and imagination had been imparted in the middle parts of the film....

The 1922 version of NOSFERATU is filled with flair and imagination throughout, and Max Schreck's Count Orlock is the most horrid of all movie vampires. I've bought both the 1922 NOSFERATU and the 1931 DRACULA on home video several times, and I've seen both several more times. If I had to pick one to watch over again right now, I'd pick NOSFERATU.