My Favorite Movie Musicals Of All Time


Out of all the various film genres, the movie musical is one I am definitely not very well versed in. I can't sing and dance, and I cannot play one single musical instrument. The whole concept of the movie musical--the idea that characters are able to burst into and out of song at the drop of a hat--has always felt disarming to me (even though I have no problem paying strict attention to giant monsters beating the crap out of each other while striding through a miniature version of Tokyo).

I also believe that another reason movie musicals are not high on my list of things to watch is that I am most assuredly a film buff as opposed to a theatrical buff. I never took any type of drama classes while in school, and the area that I was raised in, Northern Indiana, doesn't exactly have a impressive stage tradition. Movies have always seemed more "real" to me than stage productions--I'll heartily admit that I'm not the most culturally sophisticated person around.

While thinking about writing this list I wondered if I even could come up with enough entries to make it worthwhile...but I managed to get to ten, which is a sufficient total. In my all-time favorite 100 movies list there are actually three musicals. and that trio gets the top three slots here.

I'm sure some will question why there's no Fred Astaire movies here, or any of Gene Kelly's...I certainly admire the artistry of these talented men, but I must say I haven't viewed their efforts with much frequency. As a straight guy, I'd much rather watch, say, Betty Grable or Cyd Charisse dance than Fred or Gene.

Please remember that this is not a list of what I think are the greatest musicals--these are just my personal favorites.

1. THE BLUES BROTHERS
Is this really a musical? I define it as such. Looking back on it now, it's amazing that John Landis was able to get so many renowned American R & B artists involved in this.

2. WILLY WONKA AND THE CHOCOLATE FACTORY
Once again, some may question whether this counts as a musical, but it does for me. Gene Wilder's rendition of the song "Pure Imagination" is one of the most moving things I've ever heard in my life.

3. HELP!
Most film buffs choose A HARD DAY'S NIGHT as the best Beatles movie, but I love this one, probably because I saw it first, when I was a kid on late-night TV. The color, the songs, the rhythm of it, the goofiness of it--it all fascinated me back then, and it stills holds up.

4. GOLD DIGGERS OF 1933
My favorite group of movie musicals by far are the ones made at Warner Bros. during the 1930s with choreography by the legendary Busby Berkeley. The main reason for this requires a bit of explanation. When I was a kid I watched "Looney Toones" and "Merrie Melodies" cartoons nearly every day for years. When I finally did choose to watch the Warner Bros. musicals some time later, I realized that I knew all the songs already from the cartoons--which were basically a way for Warners to cross-promote their song catalog.
GOLD DIGGERS OF 1933 is my pick for top Warners-Berkeley musical. It has a great, snappy Pre-Code attitude, and a wealth of classic Hollywood performers--Joan Blondell, Ruby Keeler, Ginger Rogers, and the King of Pre-Code himself, Warren William. The climatic number, "The Forgotten Man", is simply breathtaking. 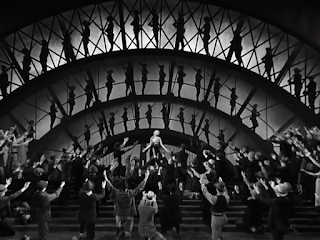 "The Forgotten Man" number from GOLD DIGGERS OF 1933

5. FOOTLIGHT PARADE
Another incredible Warners-Busby Berkeley musical, filled with flair and pizazz. This time Joan Blondell and Ruby Keeler are joined by James Cagney, who imparts his own inimitable aggressive attitude over the whole affair. The "By A Waterfall" sequence is jaw dropping.

6. THE MUSIC MAN
The ultimate classic American musical. Robert Preston IS Harold Hill, and Shirley Jones is appealing as always.

7. YANKEE DOODLE DANDY
James Cagney is so full of energy he nearly bursts off the screen--he deservedly won a Best Actor Academy Award for this. The movie is also another reason to consider Michael Curtiz as the greatest all-around film director.

8. SHOW BOAT (1936)
This version of the famed musical has the advantage of being directed by James Whale, and having performers such as Irene Dunne and Helen Morgan. You can't help but get chills when Paul Robeson sings "Old Man River".

9. PAL JOEY
For me this is the quintessential Frank Sinatra movie performance--the Chairman is basically playing himself here. It certainly doesn't hurt to have Rita Hayworth and Kim Novak along as well. Sinatra's rendition of "The Lady Is a Tramp" in the empty nightclub is a stunning sequence.

10. LITTLE SHOP OF HORRORS (1986)
The big-budget screen adaptation of the off-Broadway play (which itself was an adaptation of the low-budget 1960 Roger Corman film) wasn't as successful as its makers hoped, but I think it's a vastly underrated musical. Frank Oz did an outstanding job of direction (why hasn't he gotten to make more movies?), and Rick Moranis and Ellen Greene were so winning in their roles the original ending was changed to give them a happier outcome. The original ending was restored for the Blu-ray, and it is worth seeing. LITTLE SHOP is a very different type of musical, but it remains way better than most of the usual ones.
Posted by Dan Day, Jr. at 11:14 AM