A couple weeks ago I received an upgrade to my Xfinity account. This upgrade included new cable boxes which now give me access to all sorts of new TV shows and movies. And what did I do after being granted this modern entertainment bounty? Did I delve into the social media acclaimed presentations of such shows as STRANGER THINGS, WESTWORLD, or ORANGE IS THE NEW BLACK?

Nope. I did the same thing I usually do--watch a bunch of TV shows made before I was even born.

I always like to say that when it comes to today's TV programs, my favorite is a reality show called "The Chicago White Sox"--and since that has 162 episodes a season, it takes up a lot of my time, and I can't get into too many other shows. The fact is that the style of most 21st Century TV shows doesn't work for me. I'm used to the classic TV style--where the plot of a show is dealt with completely in the allotted time format. Classic TV shows had recurring characters, and the overall situation was basically the same week after week--but whatever happened in an individual episode almost never carried over or was ever referred to again. You watched the show for either an hour or a half hour, and that was it.

For today's TV shows, there are no individual episodes--everything is connected, and story arcs go on over entire seasons. If you watch just one episode you'll wind up being confused. You can catch up on everything by binge watching--but that's something I don't have the patience or time for, especially as I get older. It's getting so watching two movies in a row is becoming my limit--there's no way I could spend five or six hours viewing the same show. I get fidgety just trying to watch a three hour sporting event. If you have a short time to kill you can easily be entertained by classic TV.

Another reason I don't watch much modern TV is that I am the least trendy person in the world. Describing something as "buzzworthy" doesn't pique my interest--if anything it drives me away. I'm still convinced that the main reason people watch the most trend-worthy shows is because they want to talk about them on the internet. It's as if the quality of the show is secondary to how much discussion it can raise online.

Being a movie buff I can't help but get into Retro TV due to the fact that so many classic actors show up in the episodes. I'll give you some examples of this that I have experienced recently.

On Saturday nights the THIS channel shows episodes of THE SAINT, the 1960s British TV program starring Roger Moore. This show is fun for someone like me because many performers associated with Hammer Films pop up in nearly every episode. Last night an episode called "The Convenient Monster" was screened. This one has Roger Moore's Simon Templar investigating mysterious deaths at Loch Ness in Scotland--you can probably guess the rest of the plot. One of the guest stars was the ultra-cute Suzan Farmer, who appeared in many English Gothics like DRACULA, PRINCE OF DARKNESS and DIE, MONSTER, DIE! Another guest star was an actress named Caroline Blakiston. She was the first person to portray Mon Mothma in RETURN OF THE JEDI. You wouldn't know that if you just went by her appearance in THE SAINT. In this episode she has long blonde hair, a smart wardrobe, and a bit of an attitude--I thought she was rather attractive. The fact that the future leader of the Rebel Alliance had it going on at one point is worthy enough of a blog post. 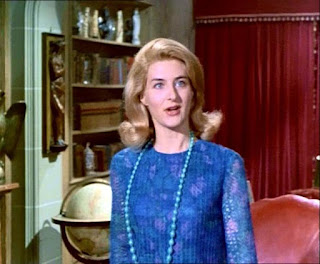 Caroline Blakiston in "The Convenient Monster" episode of THE SAINT


Recently the Encore Westerns channel has been showing the late 1950s TV series LAWMAN. I had never seen this one before. It stars John Russell as Marshal Dan Troop, who is based in Laramie, Wyoming after the Civil War. Russell's Troop is a no-nonsense fellow, and he has more of an edge to him than someone like Marshal Dillon in GUNSMOKE. If Doc Adams had tried to sit around and shoot the bull with Dan Troop, he'd get kicked out of the Marshal's office real quick. LAWMAN has a harder attitude than the typical TV Western during the same period. Not that long ago I saw an episode of LAWMAN that featured Adam West as Doc Holliday! One's first response would be that West was miscast, but I thought he did a good job. This was one of West's earliest appearances on television, and he must have been playing a younger version of the Western legend, since he wasn't hacking and coughing all the time as so many actors who play Holliday do. The very idea of Adam West playing Doc Holliday is far more intriguing to me than any present day TV star appearing on the recent cover of ENTERTAINMENT WEEKLY.

Of course not all classic TV is really "classic". Many of the shows that were once buzz-worthy themselves have not aged very well. MeTV has been showing CHARLIE'S ANGELS every afternoon. When I was a kid that show was huge--the various cast members were constantly being featured in PEOPLE magazine and numerous supermarket checkout tabloids (about the only literature my parents consistently read). If anything met the definition of "1978 clickbait", it was CHARLIE'S ANGELS.

When I look at the show now. it comes off as underwhelming. The Angels are certainly attractive, but it appears that most of the budget went to their wardrobe--a few of the episodes take place in essentially one set. For all of their supposed abilities as former cops the Angels spend more time getting into trouble than solving it. If you take away the gimmick of the three gorgeous ladies there's not all that much left to the show.

Which makes me wonder about all these gimmick-laden shows of today that people are badgering me to watch....how will they hold up years from now after the hype has died down?