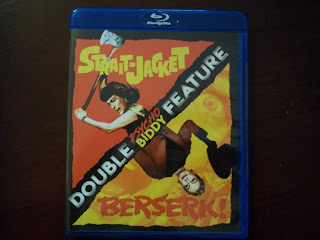 Budget conscious mavens Mill Creek have released a Blu-ray double feature entitled "Psycho Biddy". (Is that a politically incorrect term, or what?) The two films on the bill both star Joan Crawford--STRAIT-JACKET, directed by William Castle, and BERSERK!, co-written and produced by Herman Cohen.

Both movies have more in common than just the main star. William Castle and Herman Cohen were far better at exploitation and hucksterism than they were at filmmaking, and the titles they did turn out are almost always never as fun or entertaining as one expects them to be. Both STRAIT-JACKET and BERSERK! were advertised as gripping, violent, edge-of-your-seat thrillers, but with a few snips here and there these two productions could have easily passed as 1960s American TV fare. For today's purposes I'll be examining BERSERK!

The 1967 BERSERK! belongs to the very small sub-genre of murderous happenings set in a circus. The two other major examples of this mini-genre, CIRCUS OF HORRORS and CIRCUS OF FEAR, are far more interesting than BERSERK!

Joan Crawford plays Monica Rivers, the no-nonsense, hard-driving head of a traveling circus based in England. Monica's circus is played by a series of deaths, which ironically makes the show more popular than ever. The suspects are legion--nearly every member of the troupe seems to dislike everyone else. Monica also has to put up with a new high-wire artist (Ty Hardin) who wants to be her partner in business and in life, and her troubled young daughter (Judy Geeson).

BERSERK! may sound like an early version of a "body count" movie, but there's really not that many bodies, and the gore is kept to a minimum. The murders wind up taking a back seat to the various campy aspects to the story. Joan Crawford, who was in her early 60s when this film was made, struts about in a ringmaster's outfit that includes short-shorts and tights. She also gets to have a bizarre relationship with the much younger Ty Hardin (they even have a candlelight dinner, with Joan sporting a nightgown). The duo spar with one another like a couple of teenagers, and what really makes their pairing so unbelievable isn't their ages--it's the inane dialogue they have to recite. As usual with any Herman Cohen production, the lines are ripe to be quoted by bad movie geeks. I do have to give credit to Crawford for one thing--she plays Monica Rivers dead seriously, as if she's back at MGM and it's 1935. (Some might say that this approach actually adds to the camp factor.)

As in many of the other Herman Cohen productions, BERSERK! features a group of characters that are not likable or even relatable. You don't care whether any of these people get knocked off or not--they're either grist for the murderer's mill or they are set up as red herrings. All the folks who work at the circus are constantly sniping at each other or complaining about their situation--it's hard to believe such a group could be able to successfully work together to put on a show day in and day out. It would seem that the Ty Hardin character would turn out to be the hero, and catch the killer, but he's as much of a jerk as everyone else. Among the supporting players are such British cult movie veterans as Michael Gough, Diana Dors, and the ubiquitous Milton Reid.

Michael Gough is to Herman Cohen as Peter Cushing is to Terence Fisher. As a matter of fact, if Gough had not starred in such Cohen entries as THE BLACK ZOO and KONGA, those movies would be just about unwatchable. Sadly, he doesn't have much to do in BERSERK!--he gets killed very early on, and he isn't even allowed to throw one of his famous on-screen temper tantrums. Diana Dors does her familiar "faded beauty who has a bad attitude" act, but she also doesn't get much screen time before she's done away with. Robert Hardy plays the Scotland Yard man investigating the crimes. The "Police Inspector in a horror film" part can be a thankless role, but Hardy gives the character a foppish, cultivated air, and at least avoids being forgettable.

The entire affair is blandly directed by Jim O'Connolly, and the story isn't helped along by the numerous real circus acts that are presented. The acts are rather dull, and what's worse is the far too many shots of audience reactions to them that are edited into the performances. If the actual circus scenes were cut out of the film, the running time probably would have been under an hour. If you have notable acting talent like Crawford, Gough, and Dors, and a story involving outlandish murders, why spend time showing trick poodles and elephants?

But there's still other things I can complain about--such as the head-scratching sequence where some of the circus troupe decide to sing a "humorous" ditty during a party (if you've ever wanted to see Milton Reid lip-sync, this movie is what you've been waiting for). Then there's the climax, where the movie really goes off the rails. I'm not going to reveal the murderer--but if you do see this film, you'll no doubt come to the same realization as I did at the end....if you stop and think about it, the killer would have needed the ability to circumvent space and time to commit all the various slayings.

So what is the point of buying a movie like BERSERK! on Blu-ray? Well. Judy Geeson does look rather fetching in her circus costume, and I did actually get to meet her a few years ago and ask her what working with Joan Crawford was like. (She told me Crawford was a true professional, and she had great respect for her.) I'm not one of those people who get entertainment from viewing truly bad movies, but if I did, BERSERK! would be on my watch list. It adequately fits the definition of camp, and the cast alone does give it some worth to film geeks.

The print of BERSERK! on this Mill Creek Blu-ray is very colorful, and it is presented in 1.85:1 widescreen. As usual with Mill Creek, there are no extras. Indicator recently announced that they are going to also release this film on Blu-ray, and I'm sure it will be loaded with extras...but honestly, I don't consider BERSERK! to be the type of film you would want to spend a lot of money to get on home video. The Mill Creek "Psycho Biddy" Blu-ray was very cheap, and that's fine for me. 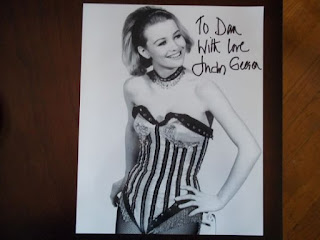