THE NIGHT STALKER On Blu-ray From Kino 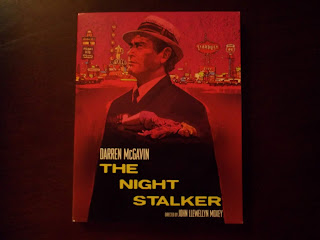 Kino Lorber gives the special edition treatment to one of the greatest television movies of all time with their Blu-ray release of THE NIGHT STALKER.

True examples of the major network made for TV film are all but extinct now (about the only places you'll find anything that comes near to that definition today are the Lifetime and Hallmark cable channels). Back in the 1970s, the TV movie had a large place in pop culture, and a few of them became nationwide hits. One of the most famous (and most watched) was THE NIGHT STALKER (1972), a tale about modern-day vampirism in Las Vegas. The telefilm spawned a sequel (THE NIGHT STRANGLER) and a short-lived series featuring the lead character of reporter Carl Kolchak, played by Darren McGavin. Kolchak still remains a geek culture icon to this day.

THE NIGHT STALKER had considerable talents behind it--the producer was Dan Curtis, creator of the cult soap opera DARK SHADOWS; the director was John Llewellyn Moxey, who had helmed one of the best English Gothic feature films of all time (CITY OF THE DEAD); and the screenplay was written by one of the great postwar American writers, Richard Matheson.

In Las Vegas, a number of women are being killed and drained of their blood. Iconoclastic newspaper reporter Carl Kolchak (Darren McGavin) starts to believe that the perpetrator of these deeds must think he's a vampire. But as he plunges further into the crimes, Kolchak comes to the realization that the killer is a real vampire. The local authorities are more of a hindrance to Kolchak than a help--and even the reporter's own boss at the paper (Simon Oakland) tries to curtail his theories. Kolchak decides to confront the vampire himself--he's convinced the resulting story will make him a big-time journalist--but the scariest thing in the tale is what the Las Vegas bureaucracy does to the reporter after he faces off against the supernatural threat.

There are a number of factors that make THE NIGHT STALKER the outstanding film that it is. The prime one is Darren McGavin, who is (and always will be, no matter how many reboots) Carl Kolchak. As soon as Kolchak strides into the newspaper office, with an insouciant look on his face, we know exactly what type of person he is. His dress and manner seem something out of the 1930s and 1940s, and he's probably more clever and craftier than any criminal he's ever covered. Because Kolchak has such a independent, non-elitist persona, the viewer is apt to believe him when he figures out there's an undead fiend stalking the women of Las Vegas. McGavin brings a bit of humor to the role, but it never seems forced, and his film-noir style narration of events is just right.

Kolchak is definitely hoping to use the vampire murders to help his own career, but there's also a few other things at play. One is that Kolchak wants to stick it to the authorities and his own boss, who consider him to be almost a clown. Another is that Kolchak really does want prevent other people from being hurt. McGavin makes Kolchak's attitudes and actions totally believable--the reporter isn't perfect, and he can be annoying, but he's someone you want on your side.

One other main factor in the success of THE NIGHT STALKER is that it is filmed and written in a realistic, down-to-earth manner. (Screenwriter Richard Matheson in particular was a master at bringing fantastic elements into ordinary American settings.) The vampire's victims are everyday, working class women, and the glitz and glamour of Las Vegas is de-emphasized.  The story takes great pains to show the medical and police procedures that would be the result of such a scenario. Director John Moxey does stage some exciting battles between the vampire and the police, but there's nothing overtly outlandish about them. Moxey also gives the vampire's hideout a creepy ambiance without the use of gore or shock effects.

The final element that makes THE NIGHT STALKER work is the cast. McGavin alone might have been enough, but he's surrounded by a plethora of great character actors: Simon Oakland, Ralph Meeker, Claude Akins, Charles McGraw, Kent Smith, Elisha Cook Jr., and Stanley Adams. (Dan Curtis was something of a film buff, and he would always take the opportunity to cast classic Hollywood notables when he could.) Carol Lynley does well as Kolchak's girlfriend (surprisingly, she does not become a candidate for the vampire's clutches). The undead fiend is played impressively by Barry Atwater. His vampire reminds me a bit of Christopher Lee's Dracula, in that Atwater has very little screen time, no dialogue, and immense strength.

Kino has fitted out this Blu-ray with a wealth of extras. There are new (but short) interviews with director John Moxey and composer Bob Cobert, who wrote the music for the film. There's a vintage interview with producer Dan Curtis, and the Blu-ray package contains a nice booklet with text on the movie by Simon Abrams. The fine cover sleeve art (see above) is by Sean Phillips. Tim Lucas contributes a brand new audio commentary, and he does his usual superlative job (he does spend a fair amount of time discussing what he feels are the political aspects of THE NIGHT STALKER).

The Blu-ray packaging touts this release as being a brand new restoration in 4K. Some on the internet have complained about the visual quality, but as far as I'm concerned, it looks and sounds pretty darn good for a telefilm made in 1971.

Even though it was "just" a TV movie, THE NIGHT STALKER remains more impressive than many feature length movies made around the same time. It's a great modern American vampire story, and important for introducing to the world the character of Carl Kolchak.