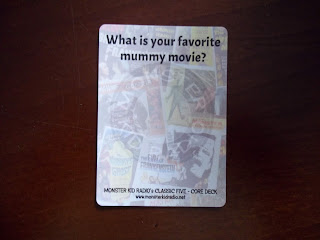 My favorite mummy movie of all time is the 1959 THE MUMMY from Hammer Films.

Yes, the 1932 THE MUMMY from Universal is a great classic horror film. It has a dreamlike, creepy atmosphere, moody expressionistic direction from Karl Freund, and it features one of the best overall performances from Boris Karloff.

But can you even classify it as a "mummy movie"? Karloff only wears the full wrappings at the beginning of the story, and we really don't get to see him in action. My definition of a mummy movie is one where an actual mummy (an undead creature wrapped in bandages) has a major role.

The Hammer THE MUMMY isn't just a remake of the Karloff version, it's a reboot of the entire Universal Mummy franchise. It allows Christopher Lee to reenact Karloff's role as a ancient Egyptian lovesick High Priest, and also portray a new version of Lon Chaney Jr's Kharis. The result is one of Lee's best overall performances. Simply put, Christopher Lee is the best movie mummy of all time. He's not the typical movie mummy that most people expect--he isn't a guy with a pot belly stumbling and shambling about. Christopher Lee's Kharis is powerfully built, and powerfully expressive. The old joke about how all you have to do to get away from the Mummy is move at a fast walk doesn't apply here. Lee's Kharis, with his strength and determination, undeniably gives the impression of a supernatural creature that could easily stalk you down and kill you. Out of all the movie mummies, Lee's is the only one that feels dangerous.

There's another aspect to Lee's Kharis that gets overlooked--the poignancy of the character. He's punished because of his great love for a Princess, sentenced to a fate worse than death, then brought back to life into a world beyond his understanding and used by a man who considers him little more than a weapon. Despite being covered head-to-toe in a very complex and effective FX makeup (brilliantly realized by Roy Ashton), Lee is still able to convey Kharis' emotions through his body language and his eyes. Lee makes Kharis into more than just an unstoppable being--at times he's sad and shameful, and the viewer appreciates that there still is a human being underneath all the wrappings.

The Hammer THE MUMMY does have a somewhat messy story structure, due to the many flashbacks in the story. But it also has many other notable elements than just Christopher Lee. Peter Cushing makes a lot out of the John Banning character, and his interactions with Kharis result in some of the best moments in the history of the Cushing-Lee screen relationship. There's plenty of fine character actors on display here, such as George Pastell, Eddie Byrne, Felix Aylmer, Raymond Huntley, and the wonderful Michael Ripper. Yvonne Furneaux brings an exotic bearing to the leading lady Hammer Glamour part.

The '59 THE MUMMY is one of the best directed films of Terence Fisher, with top-notch color cinematography by Jack Asher and production design by Bernard Robinson. It also has a magnificent music score by Franz Reizenstein. It was produced during the height of Hammer's great Gothic period, and while it doesn't get the attention that THE CURSE OF FRANKENSTEIN and HORROR OF DRACULA today, it should. It's my choice as the best mummy movie.
Posted by Dan Day, Jr. at 10:50 AM