CRY OF THE WEREWOLF

Last night on his weekly MeTV program, the legendary horror movie host Svengoolie showed the 1944 Columbia film CRY OF THE WEREWOLF. This was one of the very, very few American monster movies made during that period that I had never seen. It doesn't have much of a reputation, and after actually viewing it I can see why.

CRY OF THE WEREWOLF is something of a follow-up to Columbia's RETURN OF THE VAMPIRE, but it doesn't have the major presence of that's film star, Bela Lugosi. Nina Foch, who played the nightgown-clad damsel in distress in RETURN OF THE VAMPIRE, this time around is the main threat, a gypsy princess called Celeste who happens to be a werewolf. Foch's character is the daughter of a notorious woman named Marie La Tour, whose own supernatural tendencies were so pronounced that the ancestral La Tour home has been turned into a museum as a result.

An elderly researcher is determined to reveal the truth of the La Tour family history, and Celeste kills him--bringing the unwarranted attention she was so hoping to avoid. The researcher's son and his girlfriend, who happens to be from Transylvania, start their own investigation, and the usual local dopey police force noses in as well.

CRY OF THE WEREWOLF is very much influenced by the Universal Wolf Man films and the Val Lewton thrillers that had been recently made at RKO. There's a gypsy camp featured in the story which one swears could have been found on the Universal lot, and director Henry Levin throws in a few shadowy sequences which try to mimic the Lewton style. But CRY OF THE WEREWOLF falls short of the Universal and Lewton catalogue. The movie is only 63 minutes long, which doesn't leave much time for character development or an expansive plot. What's worse, there are no human-to-wolf transformations--Celeste just immediately dissolves into what looks like a German Shepherd. There are even a few times in the story where it seems the screenplay is trying to suggest that there isn't a werewolf--which makes no sense, considering that early on we are shown there definitely is a lycanthropic curse affecting the La Tour family. 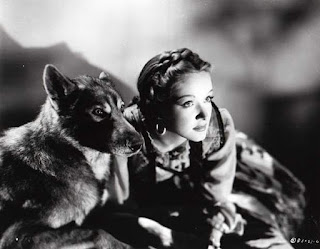 Nina Foch in a publicity still for CRY OF THE WEREWOLF


Nina Foch dominates this film as Celeste. She gives the wolf woman a sultry, almost femme fatale type of quality as she stalks about wearing high heels and black stockings. There are a few times where Celeste drops her imperious manner--such as when she sobs after one of her wolfish kills, and when she tries to seduce the researcher's son. In addition to being a werewolf, Celeste also has the ability to hypnotize people and put them in a trance. These moments make the character all the more intriguing, but the script doesn't develop them enough.

Like so many horror/science-fiction films made during the classic Hollywood period, far too much time of CRY OF THE WEREWOLF is spent on the "normal" romantic couple and the noisy cops involved in the case. The researcher's son (who has the splendidly generic name of Bob) is played by Stephen Crane, who acts as uncharismatic as one could possibly be when confronting his father's death by werewolf and his girlfriend being threatened by the same creature. The girlfriend is played by Osa Massen, an attractive girl who bears a resemblance to Nina Foch. At one point in the tale Celeste tries to put the girl under her spell, promising to make her "a sister". The script should have made the two women actual relatives--that would have given some complexity to the girl's plight. Long-time screen tough guy Barton MacLean plays the cop in charge of the case, and if anything he gets more screen time than Nina Foch does.

Maybe it's unfair to expect too much out of a film like CRY OF THE WEREWOLF--after all, it's only a 1940s B movie. But when you're like me, and you've seen so many pictures in this type of genre, one can't help but come up with various ideas on how a mediocre entry like this could have been improved. The one thing I am thankful for is that even in 2018 I'm still able to experience vintage horror films I've never seen before due to the courtesy of Svengoolie.