THE NIGHT STRANGLER On Blu-ray From Kino 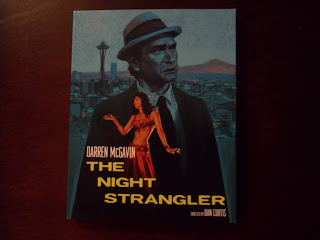 Yesterday I covered Kino's Blu-ray release of the famed TV movie THE NIGHT STALKER. Today I'll examine the sequel, THE NIGHT STRANGLER, which Kino has also put out on Blu-ray.

TV movies very rarely received sequels, but THE NIGHT STALKER was such a success a new story featuring the character of Carl Kolchak was almost a given. Much of the same team behind the first film was reunited--writer Richard Matheson, producer Dan Curtis (who also took over as director), and actors Darren McGavin as Kolchak and Simon Oakland as his exasperated boss.

THE NIGHT STRANGLER finds Kolchak in Seattle, once again working at a newspaper under Tony Vincenzo (Simon Oakland). Kolchak has barely started his new job when he winds up once again investigating a series of mysterious murders. A number of women have been strangled, and they each have had blood removed from them. Kolchak's snooping leads him to find out that every 21 years before the present, Seattle has been the setting for similar killings. Once again the local authorities consider the reporter nothing more than a nuisance, and once again Kolchak must confront the threat on his own--this time in an eerie preserved section of the city that is underground. There is a major difference, though--the killer is not a vampire, but a doctor born in the 19th Century who has discovered an elixir to prolong life.

THE NIGHT STRANGLER is almost a semi-remake of THE NIGHT STALKER. The story is structured very much the same, and many sequences are almost virtually repeats from the first film (watching the two movies in close proximity to one another vividly brings this out). It's still an entertaining story, and Dan Curtis' use of Seattle locations does much to enhance it. Richard Matheson's idea of using the real-life Seattle underground as the killer's lair is an effective concept, and the unnaturally old scientist seeking to preserve his elongated life brings to mind many other classic tales, such as THE TWILIGHT ZONE episode "Long Live Walter Jameson" and the Hammer film THE MAN WHO COULD CHEAT DEATH.

As in the first Kolchak tale, Dan Curtis brings in a number of notable performers, such as Wally Cox, Margaret Hamilton, John Carradine, and Al Lewis. The ancient doctor is played by Richard Anderson, one of the most proficient actors in American television during the 1970s and 1980s. Unlike the vampire of THE NIGHT STALKER, who had no dialogue, Anderson gets to exchange lines with Kolchak (he explains his killings much the same way a Bond villain explains a plan for world domination). Anderson gives the fiend an air of cultured intelligence, and the scenes set in his underground lair are the best in the film.

THE NIGHT STRANGLER is a very fine follow-up to THE NIGHT STALKER. But while watching it I came to the realization that the character of Kolchak suffers from what I would call "John McClain syndrome". It's always fun to watch Darren McGavin as Kolchak...but how long can a viewer keep buying into the idea of incredible events happening to the same person over and over again? If Kolchak really was a Van Helsing type, who was waging some kind of crusade against supernatural threats, maybe it would work better...but the guy is just an itinerant reporter. Maybe this is why the Kolchak TV series didn't last very long.

During his exemplary audio commentary, Tim Lucas explains that the version of THE NIGHT STRANGLER found on this Blu-ray is actually a longer cut of the movie prepared for theatrical release overseas. It's a good thing he does this, since this fact is not mentioned anywhere on the Blu-ray packaging. Lucas points out the similarities between the two Kolchak TV movies, and as might be expected, he makes some comparisons to the works of Mario Bava--but he does provide a legitimate explanation to do so. (He also throws in a couple Jess Franco references.)

Both Kolchak TV movies are fun, entertaining stories, and Kino has given each of them an impressive presentation on home video. I recommend the pair...although you may not want to watch them so closely together.