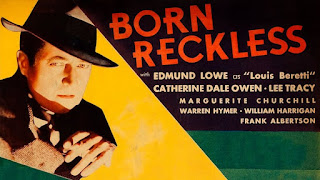 My latest home video purchase is a DVD containing two rare films directed by the legendary John Ford. BORN RECKLESS (1930) and PILGRIMAGE (1933) are two early sound features made during Ford's tenure at Fox Studios in the 1930s. Today I will be discussing BORN RECKLESS.

John Ford is my favorite movie director of all time, and when I found out recently that Edward R. Hamilton Booksellers was selling a DVD containing two Ford films I had never seen, and for a rather low price, I just had to purchase it.

In his superb biography of John Ford, author Joseph McBride writes the following: "BORN RECKLESS is perhaps the least competently directed film to bear Ford's name; it's hard to spot much in it that looks like his style." I would consider the film to be mediocre as opposed to truly awful. It has some interesting moments, and it certainly will appeal to film buffs, but it is one of those early talkies that has a lot of clunky dialogue moments that slow down the pace of the story.

The main character in BORN RECKLESS is one Louis Beretti (Edmund Lowe), a son of Italian immigrants and small-time gangster who operates in New York City during the late 1910s. Beretti is caught after a jewel robbery, but instead of going to jail, he is given the chance to join the Army and serve in WWI. Beretti returns a decorated hero, and he becomes the owner of a swanky nightclub. The man still can't escape his hoodlum past--he still hangs out with the members of his old gang. His old buddies wind up kidnapping the young child of a rich woman who happens to be the sister of one of Beretti's army comrades who was killed during the war. The woman begs Beretti to help her, and he has to decide between doing what's right and going against his old friends.

Edmund Lowe was a big star during the silent days, but here he comes off as stiff and awkward, especially during the dialogue scenes. Lowe's Beretti is supposed to be a cocky, tough fellow, but the actor is miscast as a guy of Italian ancestry who has a complicated relationship with the law. If this movie had been made a few years later, Clark Gable or George Raft would have been perfect for the role--and Warner Bros. would have been the perfect studio to produce it.

BORN RECKLESS has a number of uneasy shifts of tone--it starts out as a gangster picture, then segues into a military comedy type of story, with Beretti and his army pals engaging in various hi-jinks while in France during WWI. It's at this part of the movie where John Ford's direction seems more comfortable. The WWI sequence ends with a well-staged artillery attack, but we are never shown how Beretti earned his medals. The nightclub scenes and gangster showdowns are filmed in a very generic manner. Even Pre-Code favorites such as Warren Hymer (as a gangster) and Lee Tracy (doing his usual smart-aleck reporter bit) can't liven up the proceedings. Ford does work in some nice visual touches when he can, such as the very expressionistic opening jewel robbery and Beretti's search for the kidnapped baby, which takes him to a hideout located in an atmospheric fog-shrouded marshland. At this point in his career, or at least in this film, Ford had not yet achieved the right mixture between dialogue and visuals--BORN RECKLESS might have been better if it had been a silent. A man by the name of Andrew Bennison is given a "Staged by" credit on this film--was he responsible for the talkie scenes?

BORN RECKLESS is far from John Ford's best work...but I would recommend it to his admirers, just so one could say that had at least seen it. (One bonus for Ford fans is that the movie has bit roles for Jack Pennick and Ward Bond.)