In my tribute post to Julie Adams, I mentioned that instead of being known for just one classic monster movie, she should probably be remembered for the many Western films and TV episodes she appeared in. At the very beginning of her screen acting career, she starred in a series of low budget Westerns made by the Lippert production company, and she continued in the genre after signing a contract with Universal in the early Fifties.

Universal made a number of Westerns throughout the decade of the 1950s. The most famous of them starred James Stewart and were directed by Anthony Mann. Other notable directors such as Raoul Walsh and Budd Boetticher worked on the series, and many talented actors appeared in them such as Maureen O'Hara, Audie Murphy, Glenn Ford, Jeff Chandler, Dorothy Malone, Lee Van Cleef, and Lee Marvin. The Universal Fifties Westerns were not big-budget productions, but most of them were colorful, entertaining adventures, and the studio often used them as a chance to showcase new talent.

One of the best Westerns Julie Adams starred in while under contract with Universal is HORIZONS WEST, a 1952 outing directed by Budd Boetticher. The movie stars acclaimed actor Robert Ryan, who brings his trademark dynamic intensity to the role of Dan Hammond, a disgruntled Confederate Army veteran who wants to get rich quick after the end of the Civil War.

The story starts as Dan, his brother Neil (Rock Hudson), and their friend Tiny (James Arness) are riding back home after the end of the war. The three are headed to the Hammond family ranch, and on the way they stop at nearby Austin, Texas, which has become something of a boom town. Dan, disappointed in the outcome of the war, starts thinking about financial opportunities in Austin--especially when he sees a well-dressed beautiful woman ride by in a fancy carriage. Dan finds out that her name is Lorna Hardin (Julie Adams), and that she is the wife of local bigwig Cord Hardin (Raymond Burr).

Dan tries to go back to work on the family ranch along with Neil and Tiny, but his heart isn't in it--he wants more than just peaceful country living. He borrows money to enter a high-stakes poker game fronted by Cord, but he loses and is embarrassed when he cannot cover his losses. This just makes Dan even more ambitious. He organizes a local group of stragglers and deserters from the war and leads them on cattle raids throughout the countryside, then selling the stolen beef south of the border. Dan makes the money he desperately wants, but he also arouses suspicion, particularly from Cord, who has lost several of his stock. Cord tries to browbeat Neil to get to the truth, but Lorna tells Dan in time for him to come to his brother's rescue. (Lorna and Dan have developed feelings for one another.) A scuffle ensues, in which Dan kills Cord in self-defense. Dan avoids being charged for murder, and his quest for power continues to grow. Dan and his personal army become even more vicious than Cord ever was, leading Neil and his father (John McIntire) to try and put a stop to it all.

The Westerns that Budd Boetticher directed for Universal don't get near as much attention as the ones he made with Randolph Scott. HORIZONS WEST deserves a look due to the fact that the main character winds up being the bad guy. If HORIZONS WEST were made today one assumes that the subject of post-traumatic stress disorder would be brought up to explain Dan Hammond's overriding ambition. The movie does hint that Dan's Civil War experience has changed him, but it's not a major factor in the story. Robert Ryan had played several tough guy characters during this period, so maybe the audience was supposed to expect Dan to act in such a bold manner. Ryan doesn't rant and rave, but he makes the viewer well aware of the simmering emotions inside him. A strong, forceful performer like Ryan was perfect for the role of Dan Hammond. 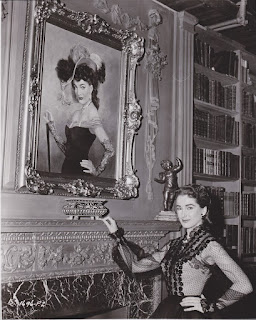 Julie Adams doesn't have a very large role as Lorna, but one can say that she is the impetus for the entire plot, since Dan Hammond's desire for the good life stems from seeing her at the beginning of the story. The role of Lorna is a bit of a departure for Julie from her usual nice girl roles of this time. Lorna isn't exactly a bad person, but it's clear she enjoys being a rich, powerful man's wife, even though she doesn't love her screen husband. (Lorna tells Dan that she thought marrying the rich Cord would solve her problems, but she grew to hate her husband's cruelty--the irony is that Dan winds up being a cruel person himself.) Julie looks fantastic in her period finery (of course she would look good in anything), and she's quite seductive when she turns on the charm for Dan.

Another reason HORIZONS WEST is notable is due to the many familiar faces in the supporting cast. Rock Hudson gets the nice guy role as brother Neil (he and Julie Adams had already appeared together in the excellent Universal Western BEND OF THE RIVER). John McIntire (who spent several years playing middle-aged men) and Aunt Bee herself, Frances Bavier, play the Hammond parents, and Dennis Weaver is the top man in Dan's gang. I've already mentioned James Arness and Raymond Burr, and Universal Monster fans will be interested to know that none other than Mae Clarke has a very, very small role (unfortunately she doesn't get to share the screen with Julie).