The great cult movie character actor Dick Miller passed away earlier this week. If you are reading this blog, I assume you know who he was. Starting with his association with producer-director Roger Corman in the 1950s, Miller appeared in all sorts of low-budget horror, science-fiction, and exploitation films, often only having a few scenes. The thing is, Miller didn't just make an appearance--he always grabbed the viewer's attention, no matter how small the part.

Miller usually played ordinary guys--everyman characters who actually worked for a living, such as store proprietors, policemen, blue collar fellows, etc. His reaction to the situations he encountered in the various wild & wacky movies he was involved in was very much how one would expect regular folks to react. Miller had a definite screen presence, a kind of swagger, that made him stand out.

That screen presence and swagger was something Miller showed a lot of in one of his very few leading roles--a 1957 Roger Corman production called ROCK ALL NIGHT.

According to Corman's autobiography HOW I MADE A HUNDRED MOVIES IN HOLLYWOOD AND NEVER LOST A DIME, American-International Pictures wanted to take advantage of the rock and roll craze, and asked Corman to make a quick movie featuring it. Corman had seen a half-hour TV show set in a bar, and impressed with its story, decided to buy the rights to it and add rock and roll music. Corman hired Charles Griffith (who would later write BUCKET OF BLOOD and THE LITTLE SHOPPE OF HORRORS) to do the screenplay.

The movie begins in a swanky nightclub (well, swanky for a 1950s Roger Corman picture). We see the Platters perform two numbers, and then a somewhat moody fellow (Dick Miller) starts a fight with one of the patrons. The fellow, who is referred to as "Shorty", gets thrown out, so he goes to another, lower-class establishment, where a young would-be singer (Abby Dalton) is having an audition. Various other characters wander into the place--a working class stiff and his smart-aleck dame, a disgruntled boxer and his wife and manager, a not-too-successful newspaper reporter, and a low-level thug who gets protection money from the complaining bartender. A man runs into the place in a panic, having seen a murder--and then he realizes that the murderers (Russell Johnson and Jonathan Haze) are sitting at the bar. A standoff ensues, where Shorty goes out of his way to get on the nerves of the criminals (and everyone else, for that matter).

Roger Corman is quoted as saying that ROCK ALL NIGHT was shot in seven days. The story takes place in only a few sets, and despite the fact that the cinematographer was the esteemed Floyd Crosby, the movie is shot in a very perfunctory manner. Even the musical sequences with the Platters and a Bill Haley-soundalike band called the Blockbusters are nothing special. Ironically for a movie that existed to take advantage of the teenage rock and roll craze, every character in it (except for Abby Dalton) looks over the age of 30.

A few of these characters, however, are quite interesting, mainly because they are given life by many members of Corman's stock company at the time, such as Barboura Morris, Ed Nelson, Bruno Ve Sota, and Beach Dickerson. Long time Corman associate Mel Welles plays a self-proclaimed musical agent/impresario named Sir Bop, and the pseudo-hip dialogue he spouts courtesy of Charles Griffith is a highlight. (Dick Miller's Shorty puts Sir Bop in his place by telling him to act his age.)

Russell Johnson and Jonathan Haze in particular make an impression as the two criminals on the lam. Johnson's Jigger has an almost Cagney-style toughness to him, even though it's a bit disconcerting to see the Professor from GILLIGAN'S ISLAND as a desperate hood. Jonathan Haze's Joey is the junior member of the duo, a nervy, twitchy guy who Shorty automatically sizes up as a weakling. 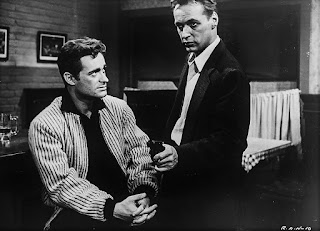 Dick Miller and Russell Johnson in ROCK ALL NIGHT


It's Dick Miller, though, who carries the film as Shorty. We get absolutely no background on the man--this movie is only an hour long, with several musical numbers--so we don't know why he has such a negative attitude, other than his stature. Has he fallen on hard times? Is he without a job? (He doesn't look too down-and-out, and he seems to have enough money for alcohol.) Whatever the reasons for Shorty's attitude, he manages to psychoanalyze every person in the bar, and force them to face their own inhibitions. (He even solves Abby Dalton's stage fright!) I found Dick Miller's performance (and Charles Griffith's script) fascinating. In a "bigger" picture Shorty would be just a supporting role, a pain-in-the-ass sitting at a bar--but here he becomes the only honest man in the joint, and he becomes the moral conscience of the story. Despite all the other supposed tough guys gathered in the bar, it's Shorty who faces down Jigger and Joey and forces them to surrender. Shorty even gets a bit of a happy ending--he goes off to see KING KONG with Abby Dalton's character!

ROCK ALL NIGHT features one of Dick Miller's best performances. The movie may have been set up to take advantage of a fad, but it becomes a very good slice-of-life drama due to Roger Corman's sense in letting the script and the actors involved carry the load. I have to imagine, though, that teenyboppers who went and saw this movie when it first came out were probably disappointed.