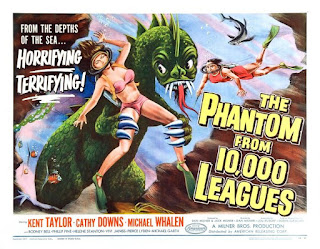 My latest cheap DVD purchase is a 1955 film called THE PHANTOM FROM 10,000 LEAGUES, released by American Releasing Corporation (the company that would soon become American International Pictures).

THE PHANTOM FROM 10,000 LEAGUES is one of those low-budget black & white science fiction films that has a title and advertising art (see above) that's way more exciting than anything in the picture. Somewhere in California, a mysterious creature has been killing people in the water near a beach located by the Pacific College of Oceanography. We get to see the creature right away, even before the main titles. As a matter of fact, we get too good of a look at this shabby sea serpent--it reminds one of a mascot for a minor league baseball team. The creature is guarding a deposit of uranium ore that has somehow been activated into a weapon by a Professor King (Michael Whalen), who works at Pacific College. (Apparently the Professor has also caused the creature's mutation.) Scientist Ted Stevens (Kent Taylor) arrives to investigate the matter for the U.S. government. A few other killings ensue before Professor King decides to take matters into his own hands.

The biggest problem THE PHANTOM FROM 10,000 LEAGUES has is that not much happens in it, other than characters talking to one another (and those characters are not very interesting). There's a subplot about how an unnamed foreign power is after the uranium deposit (this is a movie made during the Cold War, after all), but it doesn't go anywhere. The subplot does involve a batch of superfluous characters, such as Prof. King's noisy secretary and his even more suspicious-acting assistant, who is working for a slinky female spy. These folks are not developed very well, other than being very obviously shady people.

Kent Taylor is okay as Ted Stevens, but he's no Kenneth Tobey. There's an attempt at establishing a romance between Stevens and Prof. King's daughter (played by Cathy Downs, who portrayed the character referenced in the title of John Ford's classic MY DARLING CLEMENTINE), but it's dull and takes up too much screen time. The role of Professor King really needed to be played by someone like John Carradine.

If the movie does have a "highlight", it is the ending, where the Professor tries to destroy the uranium deposit (which now has the ability to blow up ships that pass over it!) and the creature. The climax is slightly reminiscent of the final sequence in the original GOJIRA (though nowhere near as accomplished from a cinematic viewpoint).

The picture was produced and edited by brothers Jack and Dan Milner; Dan Milner is credited as director. The brothers' style, at least in this production, is flat and generic.

What THE PHANTOM FROM 10,000 LEAGUES does the most is make one realize how effective Roger Corman was as a filmmaker. Corman was making similar types of films at the same time, but he always found a way to make his stories memorable--through either casting, plot points, outlandish situations, etc. Looking at the poster for THE PHANTOM FROM 10,000 LEAGUES is better than sitting through the whole film.