THE RETURN OF THE VAMPIRE On Blu-ray From Shout Factory 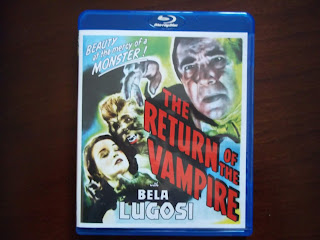 Shout Factory gives one of Bela Lugosi's best films of the 1940s the Blu-ray treatment with their release of THE RETURN OF THE VAMPIRE.

This 1943 movie from Columbia has been categorized by some as nothing more than a copy of the Universal horror style. In many ways, though, it's more notable than much of the typical Universal chillers made during the same period. For one thing, it gives Bela Lugosi a decent role as "depraved Romanian scientist" and vampire Armand Tesla. The budget and sets may have been at a B-movie level, but they were still beyond what Bela had to work with at Poverty Row studios like Monogram. THE RETURN OF THE VAMPIRE also throws in a werewolf in the form of Matt Willis (a poor man's Lon Chaney Jr.), and a mature, intelligent female as a heroic Van Helsing type, played by Frieda Inescort. (I was so impressed by Inescort's performance I wrote a blog post on it for a Anti-Damsel Blogathon a few years ago.)

The film also features an attractive, nightgown-clad object of Armand Tesla's desires in Nina Foch, supporting actors (and Universal veterans) such as Miles Mander, Gilbert Emery, and Billy Bevan, an impressive cemetery set, and plenty of fog-shrouded atmosphere. The climax of THE RETURN OF THE VAMPIRE also gives one a much better idea of what really happens to a vampire when it is exposed to the sun than Universal ever did at the time.

Overall, I consider THE RETURN OF THE VAMPIRE to be one of the better monster movies of the 1940s. It's not perfect--Matt Willis as Andreas the werewolf has a tendency to be somewhat hammy and dopey all at once--but with a 69-minute running time, it doesn't wear out its welcome, and instead of avoiding World War II like most horror films of the time did, it uses the conflict as an important and effective plot point.

THE RETURN OF THE VAMPIRE has been around on DVD from Sony for a while now. Shout Factory's Blu-ray is a bit better looking....but I wouldn't say it's outstanding. It's a tad sharper, but there's still some wear. The sound quality is much more vibrant.

The Blu-ray includes three audio commentaries. Three might sound too much for this type of movie...but I think Shout Factory realizes that since this is a black & white film that only lasts 69 minutes, they needed to have something notable to get attention from prospective buyers. Troy Howarth's talk gives a general overview of the production, and he focuses on Bela Lugosi's acting career during the 1940s. Lugosi expert Gary Don Rhodes delves deeper into the making of the film and Bela's life during his commentary. The third discussion features Lee Gambin, who spends most of the time reading from an essay he wrote concerning various 1940s werewolf films and how they relate to THE HOWLING. At times Gambin talks so fast it's hard to understand what he is saying. A trailer for the film and an extensive stills gallery is also included.

One thing I do have to mention--the picture on the back of the Blu-ray case is actually from RETURN OF THE APE MAN! Not only that, but the plot description below the picture gets a fact wrong by claiming actor Roland Varno helped stake Armand Tesla in the beginning of the film, when it was Gilbert Emery instead. Am I nitpicking here? Maybe, but I would expect a company like Shout Factory to get such things right.
Posted by Dan Day, Jr. at 1:14 PM