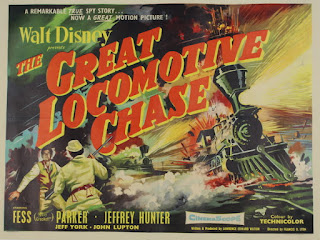 My recent post on my favorite silent movies reminded me once again how much I love Buster Keaton's THE GENERAL. I mentioned in that post how the movie is based on a real-life Civil War incident known as the Andrews Raid. In 1862 Union spy James Andrews led a group of Northern soldiers behind enemy lines into Georgia, where they attempted to wreak havoc on a railroad important to the Confederate supply line.

THE GREAT LOCOMOTIVE CHASE is a fairly straightforward dramatization of the Andrews Raid. It certainly isn't meant to be a comedy like THE GENERAL, and for the most part it takes the viewpoint of Andrews and his men. Fess Parker plays James Andrews (Parker had recently become a national celebrity due to his playing Davy Crockett for Disney). The movie shows Andrews and his hand-picked men surreptitiously traveling into Georgia and preparing to steal a locomotive engine to cause damage on the Western & Atlantic Railroad between Atlanta and Chatanooga.

The story takes a bit of time before Andrews and his men steal the engine called "The General". When they finally do, they are pursued by train conductor William Fuller, played by Jeffrey Hunter. (The character of Fuller is basically the equivalent of Buster Keaton's role in THE GENERAL.) Fuller uses all the means at his disposal to chase Andrews' group, and the Northern raiders run "The General" completely out of fuel, then abandon the train and scatter. Most of the men are captured, and while some escape, others (such as Andrews himself) are executed.

THE GREAT LOCOMOTIVE CHASE is very typical of the Disney Company's live action movies during the period of the 1950s. It is very well made and the story is presented quite effectively, in Technicolor and Cinemascope. The movie was filmed in various locations in North Carolina and Georgia, which gives the film an authentic feel, and actual Civil War-era trains were used. Director Francis D. Lyons keeps the story moving, especially during the chase, and notable supporting actors such as Kenneth Tobey and Slim Pickens are part of the cast. It's also rather historically accurate.

It's a good movie...but I wouldn't call it a great one. I think what hurts it the most is Fess Parker as Andrews. His low-key easygoing manner might have suited roles such as Davy Crockett and Daniel Boone, but in my mind James Andrews needed to have more intensity. Parker is so mild-mannered here he seems to be taking a train trip as a tourist instead of engaging in a secret mission behind enemy lines. A sub-plot of the film has some of Andrews' men not having confidence in their leader because he'd rather avoid the Confederates instead of openly fight them. In a way you can't blame these men. In my opinion Kenneth Tobey (who plays one of the men who helps William Fuller chase "The General") would have been a much better Andrews. Jeffrey Hunter, by the way, does very well as Fuller--an ordinary man who rises to the occasion under extraordinary circumstances (just like Buster Keaton in THE GENERAL).

THE GREAT LOCOMOTIVE CHASE tries very hard to be as non-political as possible. Even though the film spends most of its time dealing with Andrews and his men, William Fuller's perspective of events is shown as well, and there no sense of the story taking the side of either group. Slavery isn't even mentioned, and when Andrews does give some insight into why he is attempting this venture, he explains that it is to shorten the war and save lives. At the end of the film, while Andrews is in a Confederate prison awaiting execution, he asks for Fuller to come and see him. The man does, and Andrews tells Fuller that eventually North and South must reconcile. This scene is obviously a message to 1950s audiences about national unity, and it comes off as rather forced.

What's surprising is that the film doesn't try to sugarcoat the fate of Andrews and his men. For all the supposed importance of the raid, the Andrews group doesn't seem to cause all that much damage. The raiders don't even get to have a great climatic moment--when they run out of wood to use as fuel for "The General", they take to the hills when they spot Confederate cavalry bearing down on them. Andrews' execution is not shown, but it is established that he's not going to avoid it. The movie does show that some of Andrews' men who escaped were later awarded the Medal of Honor, but there's a muted feeling at the end of the story. I'm sure when this movie was first shown in theaters, a number of folks (particularly kids) might have considered it too downbeat.

What THE GREAT LOCOMOTIVE CHASE did for me was reaffirm the brilliance of Buster Keaton. A number of scenes in the Disney film mirrored Keaton's staging very closely (minus the comic touches of course). Keaton was very smart to focus mostly on the chase and stay away from the fate of Andrews and his men. THE GENERAL, despite its humor, remains one of the greatest action-adventure movies of all time, while THE GREAT LOCOMOTIVE CHASE might be too matter-of-fact for its own good.