THE FACE OF TERROR

THE FACE OF TERROR (aka LA CARA DEL TERROR) is a 1962 Spanish-American co-production, filmed in Spain, that belongs to the "horribly disfigured woman who undergoes ground-breaking plastic surgery with tragic results" mini-genre. Other films in this grouping include EYES WITHOUT A FACE, ATOM AGE VAMPIRE, and CORRUPTION.

Lisa Gaye, the lookalike younger sister of Debra Paget, plays Norma Worden, a mentally disturbed young woman who suffers from having half her face covered with horrid burn damage. Norma is a patient at a facility called the Institute for Neuro-Science when she overhears a Dr. Charles Taylor (Fernando Rey) ask permission of the Institute's board to use one of the patients as a subject for a brand new plastic surgery procedure. The board turns down Dr. Taylor's request, but Norma stows away in the doctor's car, and during the night enters his home and begs him to operate on her face. Taylor (not knowing that Norma is a mental patient) agrees, and the operation appears to be a success. Taylor finds out about Norma's escape from the Institute and tries to call the authorities, but Norma knocks him out, steals the money in his wallet, and takes off in his car. Norma buys herself some new clothes and makeup and travels to a nearby town, getting a job as a waitress at a swanky hotel and hoping to start a new life. But her new beauty just gets her into more trouble--and the bottle of restorative fluid she must regularly use to prevent the surgery on her face from breaking down won't last forever.

THE FACE OF TERROR is discussed in such books as Jonathan Rigby's EURO GOTHIC and FORGOTTEN HORRORS VOL. 9. Despite this fact the movie seems to me more like a over-the-top soap opera instead of a true horror film. THE FACE OF TERROR is in black & white, and there's no gore, other than the hideous makeup job on Lisa Gaye's face (which is hard to see all that clearly on the very soft print of the movie I viewed on YouTube). We are informed that Norma is a manic depressive with paranoid tendencies, but other than knocking out Dr. Taylor after the surgery, she seems to want to actually try and live a normal life. What drives her over the edge are the unwanted attentions of a randy guest at the hotel she finds work at, a man who happens to be a rich playboy, and the hotel manager, who tries to blackmail her into a relationship when he finds out who she really is. (Norma winds up dispatching both men.) Lisa Gaye gives a very strong performance as Norma--I assume she took on a role like this as a way to prove she was more than just a very, very pretty face. 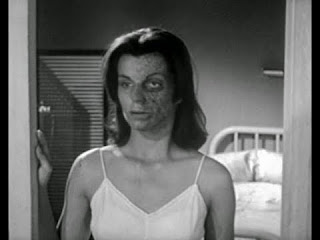 Lisa Gaye in THE FACE OF TERROR

The rest of the cast appear to be Spanish actors speaking English (some of them are obviously dubbed). Even Lisa Gaye seems to be reciting her lines with a slight Spanish accent. Even with everyone speaking English and having English-sounding names, the movie is no doubt set in Spain, which makes the story a weird hybrid.

The version of the movie I watched had a William J. Hole credited as the director. EURO GOTHIC lists a Isidoro M. Ferry as director, and a American named Monroe Manning as screenwriter. Jonathan Rigby writes that Manning was a veteran television writer, and THE FACE OF TERROR has the style and story structure of a hour-long TV drama. (One has to wonder--was Manning's script rejected for an American TV show?) The movie runs about 80 minutes, but it has a lot of padding to it. There's two different musical numbers set at the hotel that Norma works at, and there's numerous "police procedure" scenes in which bland detectives puzzle over events that we have already seen depicted (police procedure sequences are the bane of 1950s-60s horror and science fiction films). The viewer wants to know what Norma is doing, and how she is going to get out of her predicament--yet the movie constantly cuts away from her.

One expects THE FACE OF TERROR to be a lurid exploitative thriller, but it plays more like a crazy episode of THE OUTER LIMITS. It is worth seeing for Lisa Gaye's performance.