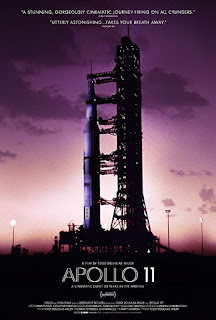 Director-editor Todd Douglas Miller assembled the film from hundreds of hours of actual NASA footage and audio produced over the course of the Apollo 11 mission to the moon. The picture and sound quality was cleaned up, and the result, when seen on the big screen, is breathtaking in its clarity and scope. The footage may be nearly fifty years old, but Miller's choice of images makes the documentary feel as if it was filmed yesterday.

There are no enhancements to the footage, no celebrity narrators, and the graphics added to help the viewer chart the progress of the mission are simple and unobtrusive. Everything in the film comes from the archives. Miller allows the footage, and the mission audio, to tell the story. Even though it's a story we all know, the presentation of it here makes it far more gripping and exciting than any fictional narrative.

What comes through in APOLLO 11 is the immensity and magnitude of what the mission, and the people who were involved in it, accomplished. Because the film is not injected with any Hollywood-style melodramatics, we are focused on what is happening, in the precise manner in which it happened. Because we are seeing and hearing the real thing, the situation becomes much more powerful.

What really struck me was how deceptively calm everyone sounded on the mission audio--you'd think these men were discussing installing a refrigerator instead of executing probably the most important event in human history. Obviously astronauts Neil Armstrong, Buzz Aldrin, and Michael Collins take center stage here, but APOLLO 11 makes clear how many thousands of other people had a part in making the mission a success.

The footage taken in outer space is amazing--it blows away any 21st Century CGI. Ironically, all the footage used is in the public domain--anyone could have used it to make their own documentary, but I doubt it would have had the impact of Miller's work. The atmospheric music score is by Matt Morton, and he used a 1968 synthesizer to record it.

The release of APOLLO 11 was certainly timed to celebrate the 50th anniversary of the moon landing, but it is particularly welcome in today's world, when everyone seems to be at each other's throats. APOLLO 11 is a powerful reminder of what humanity can accomplish, and how much more mankind needs to accomplish. Forget about all the contemporary superhero epics--this is a film featuring real special effects and real heroes, and it needs to be seen by as many people as possible.
Posted by Dan Day, Jr. at 2:27 PM