THE MAN WITH TWO FACES 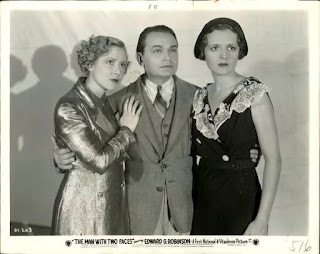 What I love most about Turner Classic Movies is how many obscure films they show. particularly ones from the 1930s. Last week TCM presented a 1934 melodrama called THE MAN WITH TWO FACES. The movie stars Edward G. Robinson, and it was produced by First National/Warners.

Robinson plays Damon Wells, a renowned (and acerbic) stage actor who is trying out a new play starring his equally renowned actress sister Jessica (Mary Astor). Jessica is making something of a comeback--she hasn't acted in three years, since her estranged husband Stanley Vance was supposedly killed. Jessica is still dealing with the after effects of her horrid marriage, but it looks like the play is bound to be a success on Broadway. Unfortunately her husband (Louis Calhern) decides to return, and his appearance causes Jessica to fall into a near-catatonic state. Stanley uses his power over Jessica to try and sell her share of the new play, and the woman's family and friends are at a loss on what to do about the situation. Brother Damon takes it upon himself to use his acting skills in a plot to rid the world of Stanley forever--but the imperious actor may be too smart for his own good.

THE MAN WITH TWO FACES is one of those early Thirties movies that doesn't take up too much of one's time (it's only 73 minutes long) and winds up being quite entertaining. It offers up a choice role for Edward G. Robinson, and one can tell he enjoyed himself immensely. Instead of playing another gangster or tough guy, Robinson got to portray an intelligent, talented artist who uses his brains instead of brawn. Damon Wells is a talented individual, and he knows it. He's prone to bossing people around and being demanding--he treats his current girlfriend (Mae Clarke) like hired help--but he does truly care about his sister, and he goes to great lengths to relieve her plight. It's great to see such a grand actor like Robinson have a showcase like this.

Mary Astor gets stuck with a difficult role as Jessica--she spends most of the movie shambling around like a zombie after her husband returns. At the start of the story, when Jessica is still "normal", she's a lively, vibrant personality, which makes it hard to believe she would be reduced to almost a vegetable just at the sight of her husband. It's never really explained what type of hold Stanley has over Jessica--is it hypnotism? Maybe it's a good idea that the man's hold over his wife is left vague--if the viewer tries to fill in the blanks, one can come up with all sorts of sinister implications. Louis Calhern plays Stanley as a smirking fellow who constantly displays a phony courtesy. He doesn't try to be outwardly evil--at one point, though, he does unexpected slap Jessica in the face, which comes as a bit of a shock. It helps that Calhern is taller than the rest of the main cast.

Ricardo Cortez is also in the movie--he's the play's producer, and he also is sweet on Jessica. It's surprising that Cortez wasn't the dangerous husband, considering how many Pre-Code con men he portrayed. I've mentioned on this blog before that every time I see Mae Clarke in a classic film, I come away more impressed by her. Her performance here backed up that opinion. Mae provides the comic relief as Damon Wells' "actress" girlfriend Daphne, and she just about steals the film. The sarcastic Daphne gets off plenty of quips, and Clarke holds her own very well with Robinson. She also gets to do an impromptu version of "Stormy Weather", and wear a cute maid outfit that we don't see her in enough. I would have loved to have seen Robinson and Clarke play similar characters in other films.

THE MAN WITH TWO FACES has an impressive pedigree--it was based on a play written by George S. Kaufman and Alexander Woollcott. Archie Mayo directs in the typical 1930s Warners fast-paced manner. I'm not going to reveal Damon's plan to solve his sister's problem, since this is not a well-known film, but it's easy to figure out while you are watching it. I will say that the movie's screenplay could have easily been turned into a COLUMBO episode. Even if the plot is quite simple to discern once the film gets going, it's worth checking out for Edward G. Robinson and Mae Clarke.
Posted by Dan Day, Jr. at 2:45 PM