STAND-IN On Blu-ray From Classic Flix


STAND-IN is a 1937 light comedy satirizing the Hollywood studio system of the period, and it has just been released on home video by Classic Flix. The movie was produced by Walter Wanger and originally released by United Artists.

The New York-based bank of Pettypacker and Sons is planning to sell their shares of Colossal Studios, but the firm's expert numbers cruncher Atterbury Dodd (Leslie Howard) thinks the company has the potential to be a wise investment. Dodd is sent to California to try to improve the studio's financial situation, but the meek mathematician is out of his element dealing with nutty film folk like an intense producer with a drinking problem (Humphrey Bogart), a temperamental "foreign" director (Alan Mowbray), a snooty leading lady who's seen better days (Marla Shelton), and a pain-in-the-neck publicity hack (Jack Carson). Dodd does attract the sympathy (and affections) of studio stand-in and former child star Lester Plum (Joan Blondell), who he hires as his secretary. Except for Lester, everyone else in Hollywood considers the straight-laced Dodd a fool, but he manages to save Colossal from being sold off to a shady financier (C. Henry Gordon).

STAND-IN isn't spectacular, but it is a nice little film, a pleasant diversion for 90 minutes. What makes it work are the performances of Leslie Howard and Joan Blondell. Howard in particular surprised me here. The character of Atterbury Dodd--a staid, mild-mannered man of efficiency--could easily wind up being annoying, but Howard makes Dodd humorously likable, and the actor even exhibits an unexpected talent for physical comedy. Joan Blondell is as appealing as always--her line deliveries make the dialogue far more snappier than it really is. Blondell is so charismatic here that even in a fictional context it's hard to believe that her strangely-named Lester is a stand-in instead of the No. 1 actress for Colossal Studios. The viewer is awarded the treat of seeing Joan perform "On the Good Ship Lollipop". 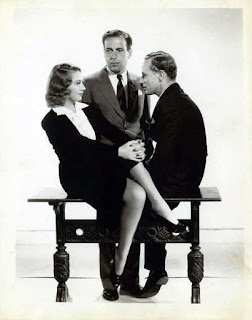 Humphrey Bogart fans might be disappointed at his supporting role, but this movie did give him a chance to break away from the many bad guy parts he was given around this time. (When one thinks about it, however, there are some similarities between movie producers and gangsters.) Bogart doesn't go the total comic route here--he displays his typical intensity--but he does get to do a few things one wouldn't expect from him, such as carry around a dog and perform a drunk scene while dressed in top hat and tails. The rest of the actors in the film have one-dimensional, generic roles.

Director Tay Garnett stages the story in an efficient manner, and classic film buffs will enjoy the inside Hollywood jokes and looks at a 1930s movie studio back lot. (Of course, during the back lot scenes we see cowboys and showgirls mingling in the background--has there ever been a back lot sequence in any form of entertainment that didn't have cowboys and showgirls wandering around??)  The climax of the story veers a bit into Frank Capra territory, with Dodd trying to get the entire working staff of the studio on his side to help stave off its shutdown. One might say the entire movie has a Capraesque tone to it, with a kind, decent, naive man fighting large odds and being supported by a street-smart woman who winds up falling for him. (The roles of Atterbury Dodd and Lester could have easily been played by James Stewart and Jean Arthur.)

Before the movie starts on this Blu-ray, Classic Flix has inserted a title card discussing how much restoration work went into it. The black & white movie looks very good--I wouldn't say it looks stupendous--and the sound is very sharp and clear. The only extras are a restoration comparison and a few trailers for other Classic Flix product. It's too bad that an audio commentary was not provided by a reputable classic film historian--I would have loved to know more behind-the-scenes information about it.
Posted by Dan Day, Jr. at 11:04 AM