THE WITCHES On Blu-ray From Shout Factory 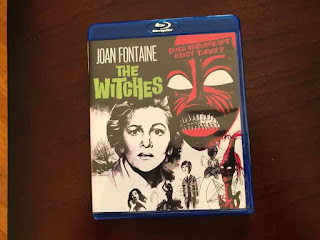 Shout Factory's latest Hammer home video release is one of the company's more offbeat productions--the 1966 tale concerning witchcraft in modern England called THE WITCHES. (The American release title was THE DEVIL'S OWN.)

The movie starts with a effective pre-credits sequence, showing how Englishwoman Gwen Mayfield, a teacher in Africa, was menaced by voodoo-inspired revolutionaries. Traumatized by the event, Gwen goes back to England and is hired to run a school at a small village called Haddaby. Despite the village's pastoral beauty, Gwen senses that something strange is underfoot, and sure enough, finds out that the majority of the town practises a bizarre form of diabolism.

It was Joan Fontaine that thought Peter Curtis' novel THE DEVIL'S OWN would make a good film, and the project was brought to Hammer's attention. The company had already worked with such past-their-prime Hollywood talents such as Bette Davis and Tallulah Bankhead. THE WITCHES doesn't really fit into the "old hag" mini-genre--Fontaine certainly doesn't look haggish here, and she's not the main menace. The character she plays here is very much like the ones she portrayed during her peak acting years--a emotionally fragile woman who is dealing with an unusual situation.

It seems to me that, with Joan Fontaine being the star of the picture, Hammer tried to do things a bit differently. Instead of one of the company's usual directors, Cyril Frankel does the honors here, and Nigel Kneale wrote the script. The only cast member that could be called a Hammer regular was Duncan Lamont, who plays the enthusiastic village butcher. THE WITCHES also features a fair amount of location work.

The problem is that THE WITCHES isn't very thrilling. The story takes awhile to get to the point, even though the viewer has figured things out long beforehand. The main location for the village, Hambleden, is quite picturesque...maybe too picturesque, because it doesn't give off any sense of menace--and neither does a sequence that has Fontaine being stampeded by a flock of...sheep! Late in the story the plot takes an abrupt turn, which does nothing but delay the proceedings. The finale features a diabolic ceremony that has several middle-aged English actors gyrating about as if they were in a Lady Gaga music video--it's one of the goofiest things I've ever seen in a movie, and believe me, I've seen plenty. The story would have worked much better as a black & white Val Lewton-type of film--or as an hour long episode of THE TWILIGHT ZONE or ALFRED HITCHCOCK PRESENTS.

There's no complaints about Shout Factory's presentation of THE WITCHES on Blu-ray. The picture and sound quality is excellent. The film is in 1.66:1 widescreen, and the visuals are very clear and colorful. The DTS-HD mono audio is quite robust.

The extras include a 50 minute documentary entitled HAMMER GLAMOUR. I believe this program was included on an earlier Hammer Blu-ray release. It's quite enjoyable, featuring interviews with such Hammer starlets as Martine Beswicke, Caroline Munro, Vera Day, Valerie Leon, and others. There's a stills gallery, and original trailers and TV spots. (In America the movie, under the title THE DEVIL'S OWN, was paired with the infamous SLAVE GIRLS--there's a double feature for you.)

A new audio commentary is provided with Ted Newsom. (On the Blu-ray case Constantine Nasr is listed as participating in it, but Newsom does all the talking.) Newsom's commentary is rather meandering, but he does address the script's weaknesses. The Blu-ray case sleeve has reversible artwork featuring the American poster for the film.

I had actually never seen THE WITCHES before I got this Blu-ray--it was one of the Hammer titles released on home video by Anchor Bay in the 1990s that I didn't get. Shout Factory's Blu-ray presentation of it is very fine...but the movie itself is just okay.