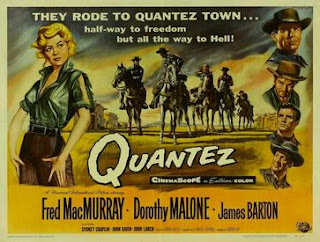 While scrolling through the list of free movies available on Xfinity OnDemand last night, I stumbled upon a Western I had never heard of--a 1957 film produced by Universal called QUANTEZ, starring Fred MacMurray and one of my favorites, Dorothy Malone.

The movie begins with five figures riding hell bent for leather through an arid landscape. The group is in flight from a posse after committing a bank robbery. The members of the group are Gentry (Fred MacMurray), Heller (John Larch), Teach (John Gavin), Gato (Sydney Chaplin), and Heller's woman Chaney (Dorothy Malone). The fugitives' horses need rest badly, and they decide to stop off at a small village called Quantez before crossing the border. They find Quantez to be deserted--what they don't know is that the inhabitants have been chased away by an Apache chief (Michael Ansara). The group rests for the night, and spends most of the time sniping at one another. Things come to a head the next morning, when the individual battles between the group are settled and the Apaches attack.

Despite the presence of major stars like MacMurray and Malone, QUANTEZ has a very B-movie attitude about it. The film is only 80 minutes long, and the budget couldn't have been all that much, considering there are only a few main characters, and the story takes place in an abandoned small town. (The movie is in color and Cinemascope.) If you are looking for Wild West action, you won't find much in QUANTEZ--even the climatic Indian attack is rather generic. The movie is more of an "adult" Western concerning the interplay between a disparate group of people.

The leader of the group is not Fred MacMurray--it's John Larch as Heller, a violent blowhard who does more talking than thinking. MacMurray's Gentry is a plain-spoken, practical man who makes knowing observations about all the other characters--if Anthony Mann had directed this film, Gentry would have been played by James Stewart. John Gavin's Teach is young and inexperienced, and Sydney Chaplin (Charlie's son) as Gato is a sneaky fellow. Gato is a white man raised by Native Americans, and during the group's stay he secretly ventures off into the hills and makes contact with Michael Ansara's Apache chief.

Dorothy Malone plays another of her many "beautiful women who have led a hard life" roles as Chaney. (If you think the name of Chaney is unusual for such a woman--could it have been an in-joke, since that same year Malone played Lon Chaney's first wife in the biopic THE MAN OF A THOUSAND FACES, also for Universal?) Since Chaney is the only woman in the film, you can guess that she causes trouble among all the men in the group. (Despite admitting she's been treated like trash most of her life, and suffering the effects of outrunning a posse on horseback, she still looks pretty darn good.) Heller yells at her and bosses her around--at one point he demands that she sing, reminding me of a similar scene involving Claire Trevor in KEY LARGO.

The movie gives no background information on the characters at the beginning--we learn about them and their situation as the story goes along. Due to this, it's hard to get all that involved in the group's plight. You've no doubt guessed that the main conflict in the tale is between the bombastic Heller and the sensible Gentry. A wandering peddler (James Barton) who ventures into the town during the night happens to reveal a major fact about Gentry's past. This just makes the viewer wonder why Gentry would even go on a bank raid with a fellow like Heller in the first place. Fred MacMurray played a number of tough characters in his acting career, which may surprise people today who only know him from Disney movies and the MY THREE SONS TV show. MacMurray is very good as Gentry, portraying him in a quiet Gary Cooper-type manner.

QUANTEZ has a somewhat downbeat ending. This ending, and the role that Gentry has to play in it, probably was the result of the revelations about the man's past. The movie was directed in a basic manner by one Henry Keller, who I am not familiar with. QUANTEZ reminded me of the many Western TV show episodes I've seen on various retro cable channels. You could easily edit the script of this movie down to an hour, change the character names, and use it for just about every TV Western of the period (for all I know, somebody might have done that, maybe more than once). QUANTEZ is an okay time filler, nothing more.
Posted by Dan Day, Jr. at 11:38 AM