THE BODY SNATCHER On Blu-ray From Shout Factory

I had been debating for a while on whether I should even buy the new Shout Factory Blu-ray of THE BODY SNATCHER. The movie is my personal favorite among the series of famed thrillers produced by Val Lewton for RKO Studios during the 1940s. But I already own the Val Lewton DVD set, which came out in 2005. I try to avoid re-buying classic black & white movies on Blu-ray, especially when they run only about 70 minutes, as most of the Val Lewton titles do.

CAT PEOPLE and THE CURSE OF THE CAT PEOPLE have both recently come out on Blu-ray, but I haven't purchased those. I certainly admire those films, as I do all the Val Lewton series....but I don't watch them as regularly as I do other famed classic horror movies. There are moments during the Lewton series when things feel a bit pretentious, with all the literary allusions and the habit of characters to pontificate instead of talk like real people.

Shout Factory's Blu-ray of THE BODY SNATCHER is definitely a worthy purchase. It's the best I've ever seen any of the Val Lewton RKO movies look.

What makes THE BODY SNATCHER my favorite among the Val Lewton series is the magnificent performance by Boris Karloff. I wouldn't call THE BODY SNATCHER a straight horror film--it's more of a historical melodrama--but Karloff's John Gray provides more menace than most of the supernatural creatures the actor ever portrayed. The cabman/body snatcher Gray has a ragged dignity about him, what with his top hat and long coat, and Karloff goes all out in showing his delight in having the esteemed Dr. MacFarlane (Henry Daniell) in his thrall. The dialogue exchanges between Karloff and Daniell are an outstanding example of the art of great screen acting. Daniell deserves as much credit as Karloff for making THE BODY SNATCHER memorable, ably showing how MacFarlane's haughty manner is merely a front to cover the man's weaknesses.

Bela Lugosi is also in THE BODY SNATCHER--he gets second billing, even though his part is rather small. Lugosi was put into the film mainly to give it some ballyhoo, and many have complained that he doesn't have much to do. Film historian Greg Mank has established from interviews with those who worked on the production that Lugosi seemed listless and out of sorts during it, but the character that he plays is supposed to be a somewhat of a pathetic fellow. THE BODY SNATCHER is the last time that Karloff and Lugosi would appear together in a feature film, and their very last scene together--where Karloff shows Lugosi how he goes about his grisly business--is one of their best as a screen team. 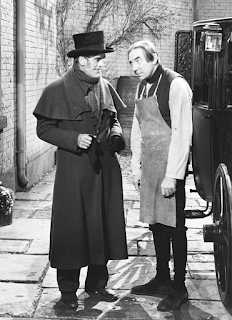 Boris Karloff and Bela Lugosi in THE BODY SNATCHER

THE BODY SNATCHER also gets high marks for Robert Wise's direction and the early 1800s Edinburgh atmosphere (even though it was filmed in California). I've always felt that Val Lewton's style worked better in a period setting.

The visual quality of Shout Factory's Blu-ray of THE BODY SNATCHER is superb. The image is razor sharp, with more brightness and clarity. The increased depth of the picture really brings out the eeriness of Karloff's creepy grin. The old Val Lewton DVD set had plenty of complaints about the quality of the prints used...this Blu-ray blows the DVD version of the movie out of the water. The soundtrack is much improved as well.

Shout Factory carries over some of the extras from the Lewton DVD box set. There's an audio commentary with Robert Wise and Steve Haberman that was on the earlier DVD, and a fine documentary called SHADOWS IN THE DARK: THE VAL LEWTON LEGACY.

The new extras include an extensive stills and poster gallery (what gets me about the advertising for this movie is how almost all of it features artwork of Karloff digging up shapely female bodies). A 12 minute feature on the movie showcases Greg Mank. It's great to see and hear Mank talk about any classic horror film, but I wish it had been much longer, considering how much superlative writing and research Mank has done on THE BODY SNATCHER. It would have been even better if Shout Factory had gotten Mank to do a brand new audio commentary.

I'm sure eventually all of the Val Lewton/RKO series of films will be on Blu-ray. I don't know if I will get them when they do (they'd better come with a boatload of new extras), but I'm glad I made an exception with this new Blu-ray of THE BODY SNATCHER. It looks stunning in HD, and it makes one appreciate even more (if that's possible) the performances of Boris Karloff and Henry Daniell.