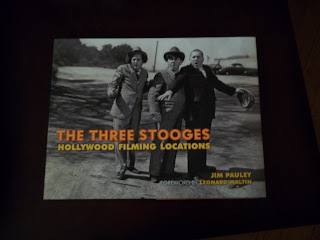 I own a number of what I call "film location" books. These books show the actual locations, or buildings, or streets, that were used for filming certain movie productions. I have one on Hammer Films which just came out this year, and I have a couple written by John Bengtson and published by Santa Monica Press, concerning Buster Keaton and Harold Lloyd. It's fascinating to know that what is now an old building is something Harold Lloyd performed on top of. The idea that an ordinary street corner is a place where Buster Keaton ran away from some movie cops is the type of stuff I love to read about.

So when I saw on Amazon that THE THREE STOOGES: HOLLYWOOD FILMING LOCATIONS was up for pre-order, I was pretty excited. I haven't talked about the Stooges yet on any of my posts, but I've been watching them almost my entire life. I have every Three Stooges Columbia short subject on DVD. If there is one thing in the world that makes me laugh no matter what the circumstances, it's The Three Stooges.

I actually pre-ordered this book back in 2011, and it just came out this month! But it is definitely worth the wait. Written by Stooge expert Jim Pauley, this volume is somewhat different than other film location books in that most of the Stooges' work at Columbia was filmed at the studio lots. In fact this book is somewhat of a mini-history of Columbia Studios. There are tons of pictures of Columbia's sets and infrastructure. There are also maps of Columbia's lots as well. I think it's safe to say that Columbia has never been covered this extensively anywhere else. Compared to companies such as MGM, Warner Brothers, and Universal, Columbia hasn't had much historical light shown on it.

Of course this book is about The Three Stooges, and about 70 of their short films for Columbia are featured. The films are listed in alphabetical order. I wish that the films had been listed chronologically, so that the reader would have a better understanding of how the series changed and developed over time, but that's a minor quibble. I like the fact that Pauley has included some of the Shemp and Joe Besser shorts--I love Curly, but Stooge history involves far more than him.

There are a number of behind-the-scenes photos of the Stooges at work, most I've never seen before. There are great "then and now" pictures of the few real locations the Stooges did use--the highlight of any film location book. The famous steps used in the Stooge short AN ACHE IN EVERY STAKE are showcased (contrary to urban legend, these are NOT the same steps used in Laurel & Hardy's THE MUSIC BOX). My favorite photo is a full two-page spread of a Columbia Pictures studio banquet with about a hundred (all male) guests. The poor Stooges are seated about as far away from Columbia chief Harry Cohn as they can possibly be!

It's obvious that if you are a Three Stooges fan, you should get this book (or get someone to get it for you). But if you happen to love seeing photos of the backlots and sets from Hollywood's Golden Age, you might want to check this book out. Jim Pauley needs to be commended not just for his painstaking research, but for providing new insight on one of the most popular film comedy teams of all time, and the studio they worked for.