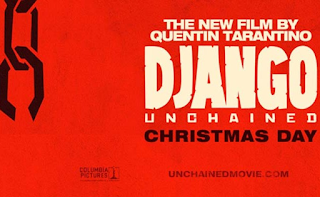 There's been a lot of people saying that Quentin Tarantino's new film, DJANGO UNCHAINED, is his attempt at a "Spaghetti Western". But when you think about it, every film that Tarantino has ever made is a spaghetti western. All the elements of the genre--the quirky & quotable dialogue, the larger-than-life characters, the over-the-top acting, and the exaggerated camera set-ups--are a huge part of Tarantino's cinematic world. He isn't doing anything different in DJANGO than he does in his other films, other than some of the characters ride horses.

It won't be a surprise to people that DJANGO is exceedingly violent and filled with crude language. It's also, in this blogger's opinion, very well made and very entertaining. Whether you like Tarantino or not, you have to admit the man puts on a show. He has a style and panache that millions of dollars worth of CGI can't match.

Jamie Foxx is surprisingly good in the title role, but this film is stolen by Christoph Waltz. Just like he did in INGLOURIOUS BASTERDS, Waltz dominates every scene he's in. If there was any actor born to be in a Tarantino movie, it's Christoph Waltz. This is going to sound crazy, but Waltz reminds me of....Bela Lugosi. Just like Lugosi, Waltz has an off-center accent which enables him to take the most innocuous line of dialogue and make it sound like it has some grim portent. As Sidney Fox said of Lugosi in MURDERS IN THE RUE MORGUE, Waltz is a show in himself.

As for the controversy surrounding the film's dealing with slavery, I honestly think Tarantino doesn't give a hoot about any political or social meanings. This is the guy who changed world history so he could have a great climax for INGLOURIOUS BASTERDS. Movie critics absolutely adore Tarantino, so he's probably not going to get too much backlash. That being said, DJANGO UNCHAINED is not for everyone. If you think this is going to be a funny Western with Jamie Foxx, it's not. If you are a fan of Tarantino's you'll enjoy it. If you don't like extreme violence or language I would suggest you skip this one. I was impressed with DJANGO, except for one thing....not once during the entire movie does Django drag a coffin behind him, like the original Django did. How could have Tarantino missed putting that in?