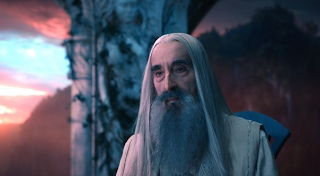 My paperback copy of J. R. R. Tolkien's "The Hobbit" is 306 pages long. Peter Jackson's THE HOBBIT: AN UNEXPECTED JOURNEY, is about three hours long.....and there's still two more parts to go. So when I say that my first impression of the film is that it's "overstuffed", I think you can understand what I mean.

I am a huge fan of THE LORD OF THE RINGS film trilogy. Seeing those films in a theater was one of the last times I had the feeling of experiencing cinema history right in front of me. I have to say that I didn't have that feeling while watching THE HOBBIT. It's very well made, it has some great moments, and it's certainly worth going to see, but so far, it just doesn't have the majesty that the RINGS trilogy had.

One of the problems is that THE LORD OF THE RINGS dealt with the entire fate of Middle Earth, while THE HOBBIT is really about a bunch of dwarves trying to get their gold back. The stakes just aren't as high. Jackson includes a backstory about the lost dwarf kingdom to try to alleviate this. Unfortunately the audience is predisposed to look at the dwarves as comic figures because of the way Gimli was portrayed in THE LORD OF THE RINGS. There are 13 dwarves in THE HOBBIT, and some of then are designed so outlandishly that it's hard to really be concerned about them. Richard Armitage is pretty good as Thorin, the Alpha Male Dwarf Prince. The rest of the dwarves are almost interchangeable (if you asked me to look at stills of them all and name them I couldn't do it).

For a movie called THE HOBBIT, the actual Hobbit, Bilbo Baggins, kind of gets lost in the shuffle. The charm of Tolkien's book is that the reader sees the story through Bilbo's eyes. Jackson has put so much extra material in the film that sometimes you forget Bilbo's even there. THE LORD OF THE RINGS did have some silly humor and large-scale action sequences, but in THE HOBBIT those elements are amped way, way up--it's as if Jackson & Co. felt the material wasn't strong enough. THE HOBBIT has way more of a video game feel than the RINGS trilogy did. The battle against the mountain goblins just goes on and on, and gets crazier and crazier....like Jackson was doing a bad imitation of the Mines of Moria sequence from THE FELLOWSHIP OF THE RING. There are some other scenes that give off a kind of "I've been here before" type of feeling.

Among the extra stuffing that Jackson serves up is an appearance by the wizard Rastagan the Brown, played by former Doctor Who Sylvester McCoy. Rastagan literally stops the show, and not really in a good way. There are also a number of cameos from veterans of the RINGS trilogy. It's always great to see Sir Christopher Lee on the big screen, no matter how brief.

As I mentioned, there are some worthy moments. The legendary game of riddles between Bilbo and Gollum is probably the best thing in the movie. Sir Ian McKellen is once again dead perfect as Gandalf. McKellen is the backbone of the entire series--without him these films would have never worked. During one of the wild action set-pieces there's a fight between stone giants that approaches a Ray Harryhausen-like quality. The dwarves singing in Bilbo's house before the start of their journey is a hauntingly powerful scene that reminds one of the best parts of the RINGS trilogy.

I enjoyed THE HOBBIT, and I'll probably go see it again...heck, I might even like it better the second time. It's a very good production, but I just didn't get the same feeling of greatness I got from THE LORD OF THE RINGS. Some people have made PHANTOM MENACE comparisons--it's nowhere near that disappointing--but I kind of wanted to be a bit more awed and impressed. There's still two films to go, so maybe the end will justify the means.