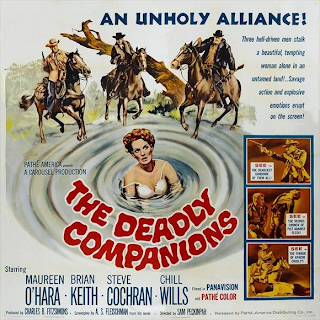 I've seen so many movies that it isn't very often now that I get to see a notable film for the first time. Yesterday Turner Classic Movies ran THE DEADLY COMPANIONS, whose main claim to fame is it was the first feature film to be directed by Sam Peckinpah. This film is not widely available on home video and is almost never shown on TV.....which is why I had not caught up to yet.

Just about everything Sam Peckinpah directed or had a hand in has been analyzed and dissected a thousand ways. THE DEADLY COMPANIONS doesn't get much coverage, even from Peckinpah scholars. Some fans of the director believe that it's not a "real" Peckinpah film, because he didn't have control of the script or the final edit. Nevertheless, it foreshadows several well-known elements that would appear in Peckinpah's later work.

The story concerns mysterious ex-Union soldier Yellowlegs (Brian Keith), who happens upon cocky gunfighter Billy (Steve Cochran) and Rebel deserter and card cheat Turk (Chill Wills). Yellowlegs has a personal reason to keep close to these men, and he suggests that they rob a bank in a small town called Gila City. The three ride there only to have other bandits attempt to rob the bank first. In the shoot-out that follows Yellowlegs accidentally kills the young son of saloon hostess Kit (Maureen O'Hara). Kit is considered a "bad woman" by the townspeople, so she decides to bury her son next to his father....but her late husband is laid to rest in a ghost town deep into Apache territory. Yellowlegs, feeling guilty, coerces Billy and Turk to join him in accompanying Kit on the journey.

Sam Peckinpah is best known for orchestrating frenetic and extremely violent action set-pieces, but you won't find any of those in THE DEADLY COMPANIONS. This is a slow, bitter, elegiac film--it feels like the work of an older man instead of the feature film debut of someone who was at the age of 35. Despite the fact that the cinematographer was the famed William Clothier, there are no sweeping vistas or panoramic scenes of natural beauty here--the country that the Companions ride through is barren and desolate.

There are several connections to Peckinpah's more famous films. Yellowlegs has a lot in common with many other Peckinpah characters like Major Dundee, Pike Bishop, Cable Hogue, Junior Bonner, and Pat Garrett--he's determined to see a job through, even though completion of the task may mean his physical (and personal) destruction. Billy and Turk are the first of the "prairie scum" that would always inhabit the rest of Peckinpah's Western output. Strother Martin has a small role as a preacher, which is somewhat ironic considering the roles he would play for Peckinpah in the future.

Maureen O'Hara was, of course, an incredibly beautiful woman, and her looks have somewhat overshadowed her acting talent. The "dance hall girl" is one of the biggest cliches of the Western, but O'Hara makes Kit into a three-dimensional person, a single mother who, despite suffering extreme hardship, has not lost her pride or her spirit. Very few actresses at the time could have played this role. Brian Keith was one of the most underrated of American actors--he wasn't known as a superstar, but he made a lot of so-called superstars look pretty good. Keith was never showy, or flashy, but he brought a realness and a solid foundation to every part he undertook. Yellowlegs is a character who always keeps everything close to the vest (we never even find out his real name) and the audience never really knows what Yellowlegs is going to do or how he is going to act. Keith, though, has an inner strength that he is able to project which makes the viewer like and trust him. O'Hara and Keith had just appeared together in THE PARENT TRAP, and they have excellent chemistry-- almost as good as the chemistry O'Hara had with John Wayne, but in a very different way. Steve Cochran and Chill Wills, in this movie at least, act like the type of guys you want to see get punched in the face.

The reason Sam Peckinpah was given a chance to direct THE DEADLY COMPANIONS was because of the recommendation of Brian Keith, who had worked with Peckinpah in American television. The man who hired Peckinpah was producer Charles Fitzsimons--who happened to be Maureen O'Hara's brother. The ultra-professional O'Hara and Peckinpah didn't get along too well--a sign of things to come for the rest of "Bloody Sam's" career. One can be sure that Peckinpah was jealous over the family relationship between producer and lead actress. (By the way, it really is Maureen singing the song during the beginning & end credits.)

As mentioned before, THE DEADLY COMPANIONS has nowhere near the reputation of other Peckinpah films such as RIDE THE HIGH COUNTRY and THE WILD BUNCH. It's not a bad film by any stretch....it's well made, with great performances by O'Hara and Keith. But it's very depressing, and it makes one wonder....if you took away all the violence of Peckinpah's more famous work, what would you have left? Something like THE DEADLY COMPANIONS.

NOTE: This film is going to be released on DVD by VCI Entertainment in February 2013.