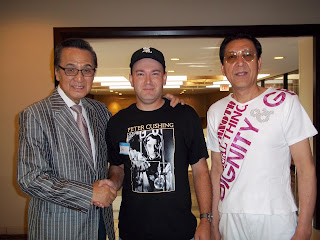 In one of my earlier posts I mentioned meeting Svengoolie at the 2012 G-Fest held in Rosemont, IL. I met some other people of note at that convention as well--Akira Takarada (on the left) and Bin Furuya (on the right). Akira Takarada starred in the original GODZILLA, and appeared in a number of other Toho kaiju films, including INVASION OF ASTRO MONSTER, GODZILLA VS. THE SEA MONSTER and KING KONG ESCAPES. Bin Furuya was the original Ultraman! 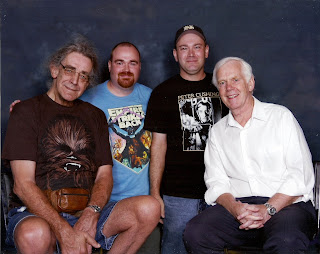 In August of this year I attended the Wizard Comic Con with my brother Robert, which was held right down the road from where G-Fest was. We got our picture taken with STAR WARS actors Peter Mayhew (Chewbacca) and Jeremy Bulloch (Boba Fett).

By the way, since it's the end of the year, I'd like to thank all of you who have taken time to read this blog. I must admit when I started doing this I wasn't too confident on how it would turn out, but I've gotten a number of nice comments and doing this blog has been very enjoyable for me. If any of you gracious readers out there have any suggestions, or have in mind any certain films, performers, or subjects you would like me to blog about, please feel free to let me know.

Happy New Year and Thank You