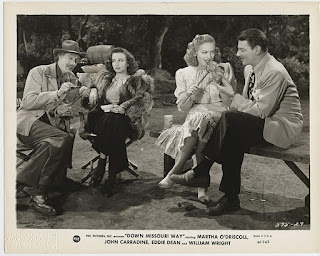 Yesterday was a Saturday, and having the day off I was doing some housework and laundry. While going through my on-screen cable guide I noticed that the Encore Western channel was going to show a film called DOWN MISSOURI WAY--a film which stars Martha O'Driscoll and John Carradine. I figured I just had to take the opportunity to see a re-teaming of the stars of HOUSE OF DRACULA.

DOWN MISSOURI WAY is a 1946 comedy-musical made by the Poverty Row studio PRC. As a Universal ingenue Martha O'Driscoll didn't get much of a chance to shine, but her she has the lead role, and she even gets to sing. She plays Jane Colwell, a professor at an agricultural college. Prof. Colwell is having problems with her trained mule, Shirley, so she decides to take the animal back home to her farm in Missouri. Upon arrival she finds out that the farm has been rented out to a Hollywood studio as use for a film location. The Professor wants the company off the land, but she relents when she falls for the movie's producer (William Wright). The movie's director (John Carradine) wants to use Shirley in the film, which leads to various complications, but all works out right in the end. (For all the attention paid to Shirley in this story, she doesn't really live up to her "Wonder Mule" reputation--she spends of the time looking bored.)

DOWN MISSOURI WAY is a lighthearted, low-budget feature that doesn't have anything notable about it other than some of the members of its cast. It's the type of movie where there's a song nearly every five minutes, and nearly every character gets to sing--even Carradine. None of the tunes are particularly memorable, and director Josef Berne stages the singing sequences in a perfunctory manner. If the songs were cut out of the movie, the running time would have been about 40 minutes.

Martha O'Driscoll has a rival for the producer's affections in the form of a haughty actress played by Renee Godfrey. Godfrey was another Universal veteran--she played the femme fatale in the Sherlock Holmes series entry TERROR BY NIGHT. (Godfrey also gets to sing as well.) William Wright is a rather generic leading man, and Mabel Todd plays a comedic hillbilly gal.

As for John Carradine, one would expect him to ham it up in the role of the artsy director, who has the florid name of Thorndike "Thorny" Dunning. Instead Carradine has a casual attitude about him--he seems bemused over the whole sequence of events. Carradine seems to be enjoying himself here...maybe he just appreciated not having to play another horror character. (Did he and O'Driscoll discuss their Universal work?)

There isn't all that much to say about DOWN MISSOURI WAY, other than it is a nice showcase for Martha O'Driscoll. She was extremely photogenic and blessed with a likable on-screen personality, and it's a wonder why she didn't become a big star. DOWN MISSOURI WAY was actually one of O'Driscoll's last screen appearances--not too long after it she married a prominent businessman and retired from acting. You can't blame her for doing so--I'm sure she wasn't all that excited about singing a love song to a mule.