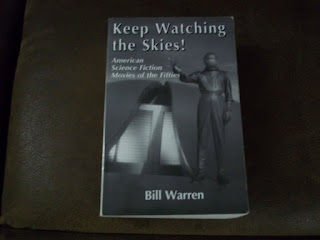 A few weeks ago, I traveled out to Illinois to visit my brother Robert. We visited a number of Chicago record stores, and on the way back to Robert's house we stopped at a Half Price Books, where I purchased a used copy of KEEP WATCHING THE SKIES!, one of the most famous books ever written on American science fiction films of the 1950s. (The price was only $10.)

The copy of the book that I bought was a 1997 softcover version which combined both volumes of KEEP WATCHING THE SKIES! Volume I covers the years 1950-1957, while Volume II covers 1958-1962. This truly can be called a tome, since its total length is over 1300 pages.

The volumes were originally published by McFarland in 1982 and 1986. The intent of author Bill Warren (1943-2016) was to attempt to survey every science fiction film released in America between 1950-1962.

It was in the mid-1980s as a young teenager that I really started becoming a film buff. At that time KEEP WATCHING THE SKIES! already had developed a mammoth reputation. Most of the movie magazines that I read at the time, such as STARLOG, FILMFAX, and CINEMAFANTASTIQUE, extensively quoted from it, as did just about every book on science fiction films written during the period. At that time I couldn't afford to buy KEEP WATCHING THE SKIES!, what with McFarland products being out of my price range (heck, they're still out of my price range today). I considered finding a decent used copy of the combined volumes at $10 a great deal.

But I had to wonder....how would a book on science fiction films of the 1950s, written in the 1980s, hold up in the 21st Century? Many of the movies covered in it have been restored and remastered recently on home video, and many of them have been reevaluated by several other leading genre historians. Does KEEP WATCHING THE SKIES! still have relevancy today? I have to emphatically report that it certainly does.

Warren's analysis of the many films in the book is consistently cogent and incisive, particularly when he has strong feelings about a particular entry. He can be snarky and sarcastic when he has to be, but he avoids the dopey "Golden Turkey Awards" type of criticism. (I do have to point out that Warren has plenty of non-favorites, such as John Agar, Bert I. Gordon, and Irwin Allen).

What comes across the most from the book is that Warren truly loved the genre of American science fiction films, and he appreciated the best entries of it not as a critic or a scholar, but as a fan. Warren saw many of the films covered in the book during their original theatrical release while he was a young man. I think this fact is very important--there's something to be said about seeing a film when it first came out, on the big screen, instead of watching it for the first time on home video years and years after it was made. The fact that Warren lived during the period when these films were made, and was basically the type of person these films were made for, gave him a huge advantage in analyzing the titles in their proper context.

Warren devotes several more pages to the more famous sci-fi films of the period, such as INVASION OF THE BODY SNATCHERS and FORBIDDEN PLANET. On some more obscure productions the author at times reduces his thoughts to a few paragraphs. Warren's insistence to cover all the science fiction films released in America during his chosen time causes him to include a number of titles even I've never heard of. I'm sure a few of the movies in this book have still never been properly discussed anywhere else, even in this internet age.

Thankfully for a book of this length, Warren's writing style is entertaining and and intelligent without being too overwrought. He doesn't dumb down his thoughts to the reader--he correctly assumes that anyone reading the book would probably have the same mindset and interests as himself. Many of Warren's opinions about the various films go against what is generally accepted by film buffs now. I didn't agree with all of Warren's conclusions--but that's fine. I've read so many books, magazines, and articles on classic horror and science fiction movies that by now it's refreshing to come across something on that subject that provides a different perspective.

One of Warren's main themes is that many of the science fiction movies of the 1950s displayed a no-nonsense, black & white style inspired by film noir thrillers and programs such as DRAGNET. Warren believes this was done due to budgetary as well as aesthetic reasons. Warren also points out that a 1952 re-release of KING KONG in America had a major influence on how science fiction cinema turned out over the next few years.

Having finally read my copy of KEEP WATCHING THE SKIES! all the way through, I can say that the book more than lives up to its legendary reputation. It definitely belongs in the "must have" section of every monster movie fan's personal library. The greatest compliment I can give it is that it made me want to see so many of the films it discusses all over again.