IF YOU MEET SARTANA...PRAY FOR YOUR DEATH 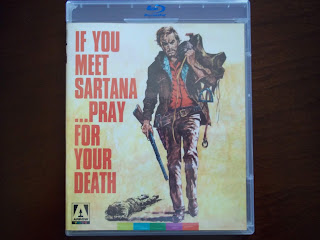 In the past few years I've managed to build a considerable Spaghetti Western movie collection on home video. I have movies starring all the famous characters of the genre, such as The Man With No Name, Sabata, Ringo, Trinity, Django, Cuchillo....now Arrow Video has released a box set of films containing the adventures of a man named Sartana. I had never seen any of the five films included in this set, but they were recommended to me by my friend Mark Holmes. Each of the five films is given its own disc & packaging, and there are several extras on each disc. A 56-page booklet which has background information on the films is also with the set.

The character of Sartana has a lot in common with most Euro Western heroes: he doesn't speak much, no background information is revealed about him, and he has deadly proficiency with all sorts of weapons. Sartana (played in most of the films by Italian actor Gianni Garko) does cut an impressive figure in his black suit, black hat, and red-lined black cloak. The man is also a cardsharp and a sleight-of-hand artist, and he has an uncanny ability to appear or disappear depending on the circumstances (in the first Sartana film, one of the characters in the very beginning of the story compares him to a ghost).

The first "official" Sartana film is the 1968 IF YOU MEET SARTANA...PRAY FOR YOUR DEATH. (An outlandish title would be a tradition for a Sartana film.) The convoluted plot deals with a stolen gold shipment that Sartana has an interest in (it's suggested in the film that he might be an insurance agent, but it seems he really just wants it all for himself). The gold shipment comes from a small town bank, and nearly every citizen seems to be in on the plot somehow. Sartana has to deal with numerous foes before he gets his hands on the money.

IF YOU MEET SARTANA...is an okay Spaghetti Western, certainly not in the class of the better ones. The movie was directed by Gianfranco Parolini, under his alias "Frank Kramer" (he would go on to oversee the SABATA series with Lee Van Cleef). There's plenty of shooting (two different groups of bandits are massacred in the first 15 minutes), but almost no blood is shown. Parolini keeps things going along at a rapid clip...maybe too rapid, since (at least for me) it's hard to figure out who is double-dealing who.

There's a number of Spaghetti Western veterans showcased here--William Berger, Fernando Sancho, and the one and only Klaus Kinski. At the start of the film it appears as if Kinski will be Sartana's main adversary, but the cult actor doesn't even make it through the halfway point of the story, and he doesn't get much to do. One of the many folks scheming for the gold is played by Sydney Chaplin, the son of Charlie Chaplin!

Arrow Video does its usual outstanding job with this somewhat obscure title. The movie is presented in 1.85:1 anamorphic widescreen, and despite some wear and tear on the print at times, the visual quality is very good. The original Italian and English soundtracks are included, along with English subtitles.

There's plenty of extras here. The audio commentary is by German film archivist Mike Siegel, and it is rather rambling and confusing. Also rambling is a recent interview with Gianfranco Parolini, who goes from one random subject to another while barely mentioning his Sartana film. The best extra is a video essay by Jonathan Bygraves which showcases the actors who appeared throughout the Sartana series.

IF YOU MEET SARTANA...PRAY FOR YOUR DEATH is a serviceable Euro Western, and fans of the genre will appreciate it more. The next films in the series would get even wilder....and yes, I'll be covering them in this blog.